As I write, I am sitting in Ketchikan harbor on the Alaskan ferry M/V Kennicott watching sea planes take off and land.  (Adding my floatplane rating to my pilot license is high on my to-do list.)

How we will attack the Pan American Highway:

Holly and I are on the first leg of our adventure to drive the Pan American Highway from Prudhoe Bay, Alaska on the Arctic Ocean all the way south to Ushuaia, Argentina at the Southern tip of South America.

The second leg of the trip will take us through Mexico and Central America to Panama.  In Panama we must ship our Landcruiser to Columbia because the road ends in Panama at Darien.  The aptly named Darien Gap is a portion of jungle so dense and impassible that a road has not been built.

The third leg of the trip will be South America from Columbia in the north to Argentina in the south.  Some side trips we hope to take include the Galapagos Islands, Easter Island, and Antarctica.  This trip will no doubt be split into two segments, with a return to the U.S. for Christmas.

We won’t be slaves to the route itself, we think of it as more of a suggestion.  We will deviate to add interesting places and sights to our itinerary.  For example Belize is not on the Pan American Highway, but I would definitely like to include a side trip there.

Hank:  We are driving our restored 1983 Toyota Landcruiser “Hank”.  Hank, loaded and ready to go. 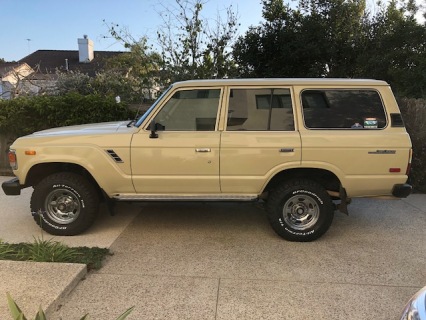 We have done extensive work on this FJ60.  We bought it a couple of years ago for this specific trip.  I bought an older Landcruiser because my knowledge of automobile mechanics ended in mid-1970 with high school auto shop.  Today’s vehicles are beyond my ability to repair, but Hank still has a carburetor, spark plugs and a distributor cap; all recognizable to me.

Originally my idea was to have a vehicle that is not too nice, so as not to stand out in 3rd world countries.  We bought Hank from his previous owner in Arizona and then I just couldn’t help myself.  To prepare Hank we had the rust on the exterior removed and the body painted.  We added Dynamat on the floors, roof and door panels to reduce road noise.  We installed new carpet and a new headliner.  We tinted the windows.  We added a modern radio with Apple Car Play.  We overhauled the suspension, the transmission, the transfer cases, the exhaust and the air-conditioning.  The new Old Man Emu suspension upgrade replaced the original sagging suspension resulting in the truck resting a few inches higher on its frame.  We added ARB side steps so Holly could get in and out without a running jump.  (It helps me too.)  We added an ARB air compressor under the hood so we can air our tires up and down (and fix flats as needed). We also added a second battery under the hood to provide power to our Dometic refrigerator and other appliances without affecting Hank’s cranking battery.  Before we left on the trip, one of the heater hoses failed, so I had all the heater hoses replaced – just in case.

Just before leaving we replaced the tires with BF Goodrich All-Terrain tires.  I also added a small buzzer to the fuse panel to remind me if I should leave the lights on.  About the only thing we didn’t do was to overhaul or replace the engine, although we did a fair amount of work on the engine also.  When all was said and done, I could easily have bought a very nice brand new SUV 4×4 for what we put into Hank.

On the other hand, I never stop at a gas station without getting compliments and frequently a conversation will breakout.  I also get honks and thumbs up from passing vehicles.  If I encounter a fellow Landcruiser owner, then there will definitely be an extended conversation.

We did not add a roof rack or a bumper winch or change the bumpers or add a snorkel.  We are trying to keep the weight of the vehicle as low as possible and the center of gravity low.  We did bring along a winch-less recovery kit put together by our friends at 7P International in case we get stuck somewhere.

Our most significant addition is a second fuel tank.  Model FJ-60 Toyota Landcruisers with the standard 2F straight 6 cylinder gasoline engines get terrible gas mileage, about 10 mpg (11 if I’m going downhill with a tailwind).  The standard 23 gallon tank gives us an effective range of about 200+ miles (with a little to spare).  We added a 75 liter (about 20 more gallons) fuel tank we bought from Brown Davis in Australia.  No one in the USA makes an auxiliary tank designed for the FJ60, and I’ve found that Australia seems to be crazy for all things off-road. (I guess it’s that giant Outback I hear they have.)  In any event, the Aussies seem to have us beat when it comes to 4X4 accessories.

Getting to the Starting Point:

To get to Deadhorse Alaska, our Northernmost starting point will take about 3 weeks. Here’s our plan to go North:

Alaska Marine Highway System:  The State of Alaska operates a system of Ferries collectively known as the Alaska Marine Highway system, to move people and vehicles to the coastal communities of Alaska, many of which cannot be reached by road.  Our ship is the M/V Kennicott which will take us from the lower 48 to Homer near the Southwest tip of Alaska’s Kenai Peninsula.  We will disembark for a day and a half on Kodiak Island, before re-boarding the Kennicott for the final leg from Kodiak to Homer.