On to Morocco – Tangier & Casablanca

On December 22, 2014 we spent the morning in Gibraltar and then in the mid-afternoon we took a taxi from Gibraltar to Tarifa, Spain to catch the ferry to Tangier, Morocco. Here are Holly and Rebecca on the ferry:

Our tour through Morocco.

We spent about 3 weeks in Morocco.  After arriving at Tangier from Spain on the ferry we took the train to Casablanca where we were joined by our other two daughters Kate and Natalie.  We all then proceed again by train to Marrakesh where we spent several days including a day trip to Essaouira.  Then we took a tour by car from Marrakesh to Fes that carried us across the high Atlas Mountains and to the sand dunes of the Sahara Desert.  Finally from Fes we took the train back to Casablanca to end our trip through Morocco. 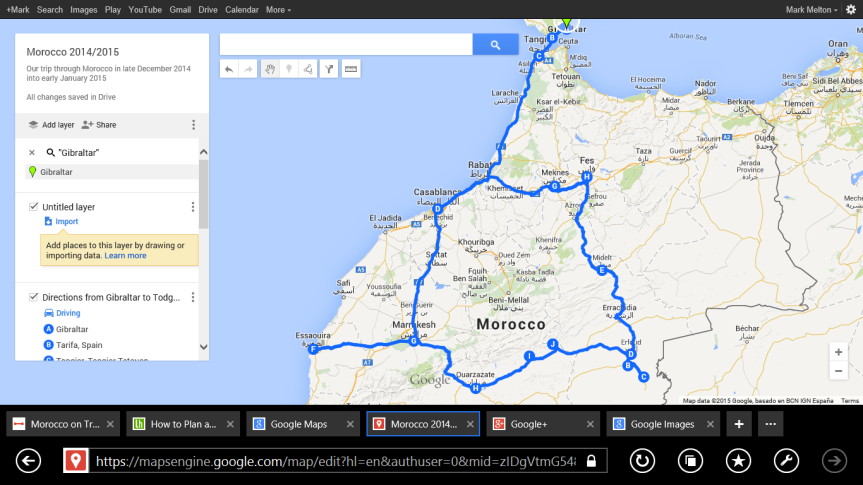 Tangier, Morocco
Stepping off the ferry onto the docks of the Tangier ferry terminal we were immediately spotted as the tourists we are and set upon by “guides” offering their services. We ran the gauntlet trying as politely as possible to decline their “help” while we sought out an ATM to obtain some local currency (dirham) so we could pay a taxi driver and then negotiate a ride to our hotel.

Our hotel was on the main boulevard (Mohammed VI) overlooking the boardwalk and the beach. Here’s a view from the window of our hotel room:

We arrived in Tangier in the late afternoon and left early the next morning to catch the train to Casablanca. We were anxious to see some of Tangier, so we decided to go to dinner in the Medina (old city) to see at least a bit of Tangier. We took a taxi that evening into Tangier’s medina – our first of many Moroccan medinas – and were immediately hit with sensory overload. While we acclimated to Morocco during our 3 weeks in the country, we initially felt overwhelmed and intimidated by our new, and to us, exotic surroundings.

It didn’t help that our taxi driver didn’t quite know where to take us. He pulled up outside of a dark and seedy looking restaurant open to the street. This did not exactly look like the kind of establishment we expected the hotel would have sent us to. Surely this was not the right restaurant. After we asked a couple of men on the street, they directed us down the street, then down a short alley and up some stairs to a very nice restaurant – just the place we had been looking for.

As you can see from the following photo the restaurant was bright and open, and there was a group of 4 men playing traditional Moroccan tunes. As we left, we gave the quartet a tip and they launched into a very spirited rendition of whatever tune it was – and they took great pleasure at having their photo taken with Rebecca. 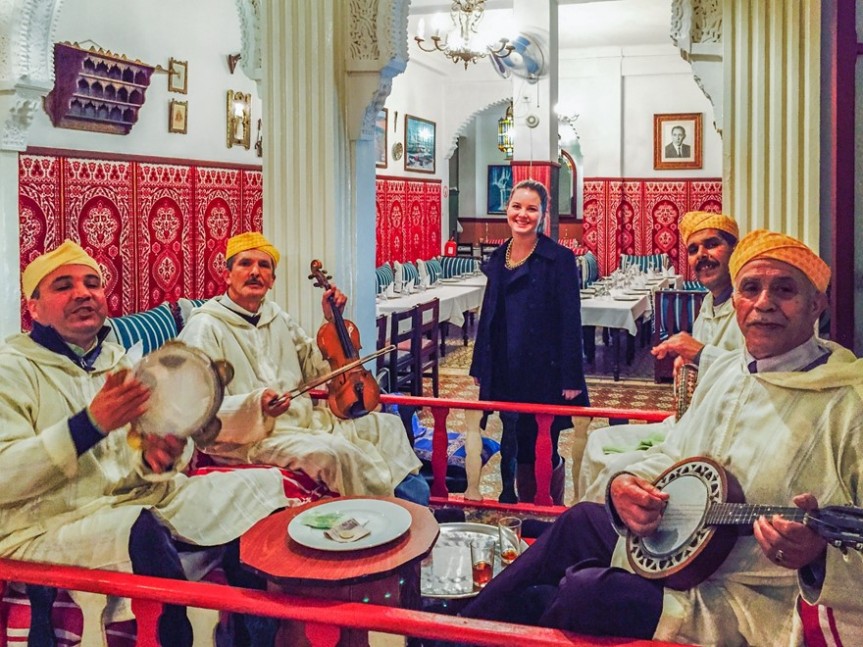 After only one night in Tangier, we caught an early train to Casablanca in the morning. We arrived in Casablanca in the afternoon and after checking into our hotel, we headed over to the Quartier des Habous for the first of our many Morocco souk shopping adventures.

Rebecca’s was excited by her first purchase, a small camel ornament. Unfortunately, Rebecca forgot her camel at the hotel when we checked out. I was confident that we would have many more opportunities to purchase toy camels, and indeed we did. We found that camels of all sizes and colors are readily available in every market in Morocco.

The next day, our main task was to pick up our two other daughters, Kate and Natalie at the Casablanca Mohammed V Airport. Their flights were arriving in the afternoon, so in the morning we visited the Hassan II Mosque.

From Fodor’s Morocco: “Casablanca’s skyline is dominated by this massive edifice. No matter where you are, you’re bound to see it thanks to its attention-grabbing green-tile roof. The building’s foundations lie partly on land and partly in the sea, and at one point you can see the water through a glass floor. The main hall holds and astonishing 25,000 people and has a retractable roof so that it can be turned into a courtyard. The minaret is more than 650 feet high, and the mezzanine floor (which holds the women’s section, about 6 feet above the main floor) seems dwarfed by the nearly 200-foot-high ceiling. Still, the ceiling’s enormous painted decorations appear small and delicate from below.” 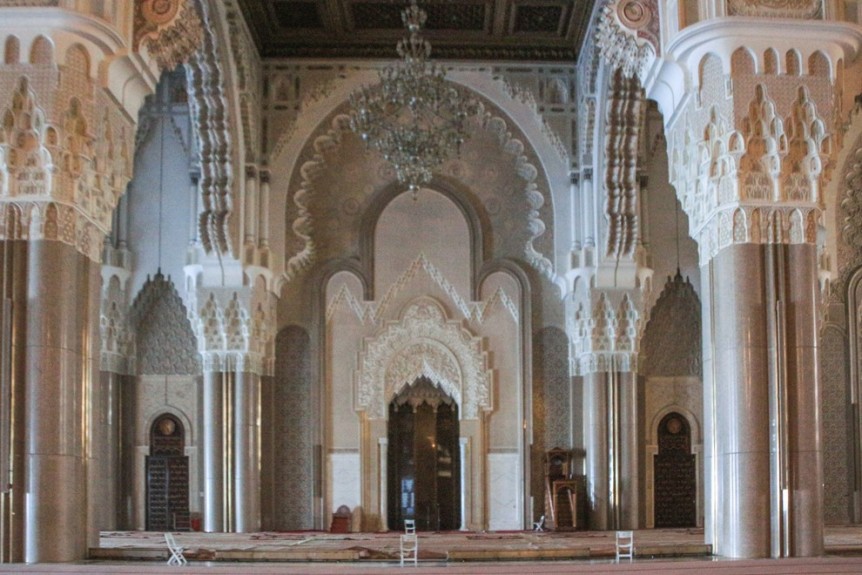 Continuing from Fodor’s Morocco: “Funded through public subscription, designed by a French architect, and built by a team of 35,000, the mosque went up between 1987 and 1993 and is now the third-largest mosque in the world, after the Haramain Mosque in Mecca and the Prophet’s Mosque in Medina. It was set in Casablanca primarily so that the largest city in the kingdom would have a monument worthy of its size. Except for Tin Maland this is the only mosque in Morocco that non-Muslims are allowed to enter.” 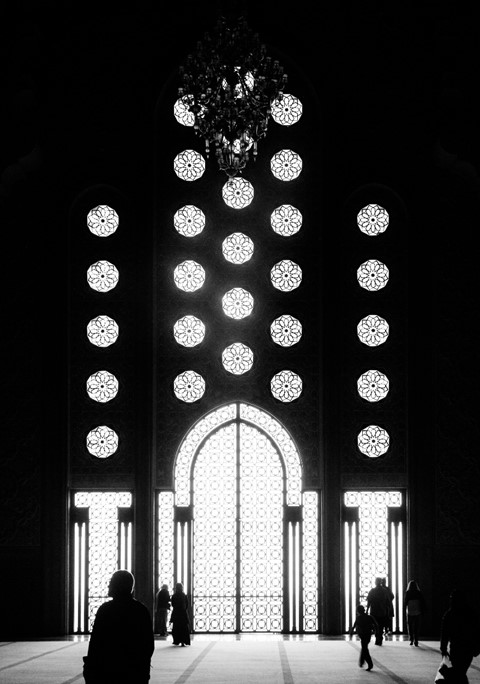 Although not required to wear head-scarves in the mosque, Holly and Rebecca wanted to be respectful. 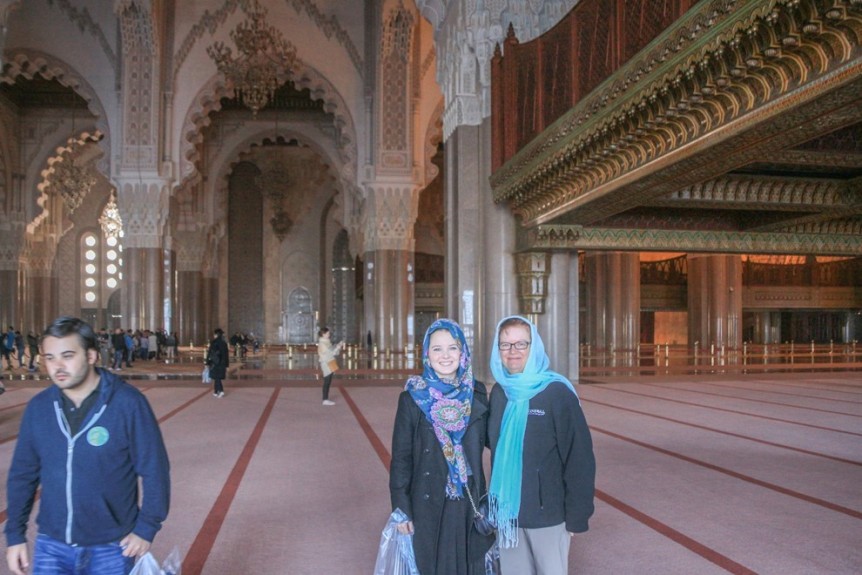 These fountains are downstairs for ritual washing before attending services.

There is also a large area with pools that was meant to be a Hammam, but it’s not used for that purpose yet, so it’s still open to visitors. (A hammam is a public or private bath with a brisk exfoliating scrub.)

Looking south from the Mosque, along the shoreline is the lighthouse.

Here are Rebecca and I in front of the Mosque’s minaret.

Collecting Kate and Natalie at the airport turned out to be a frustrating experience. I was able to meet Kate no problem, but Natalie ended up waiting for 1.5 hours outside Terminal 2 while Kate and I waited for her inside Terminal 1. I ended up spending a good chunk of the day at the airport while Holly & Rebecca enjoyed a hammam (see above) at the hotel. Although the debacle at the airport created a lot of stress for all involved, we were relieved when we finally united with Natalie and our patient taxi driver, who had waited through the entire odyssey,  took us to our hotel.

For Kate & Natalie’s one evening in Casablanca, we decided to have dinner at Rick’s Café. If you want to relive the “Casablanca” the movie (Bogey & Bergman) this is the restaurant for you. The food was good, but really it’s the atmosphere and furnishings.

Natalie, Rebecca, Kate and Holly at the entrance to Rick’s Café:

The interior of Rick’s Café has been renovated to faithfully evoke the 1942 movie set. They even have their own Sam at the piano (Issam) playing jazz. It was fun and, although completely a touristy type of thing, I recommend it and I would go back the next time I’m in Casablanca.

In the spirit of Casablanca the movie, here we are in glorious black and white enjoying our meal at Rick’s Café. In the room behind us there was a roulette table. However, I was shocked, shocked, that there was NO gambling here. 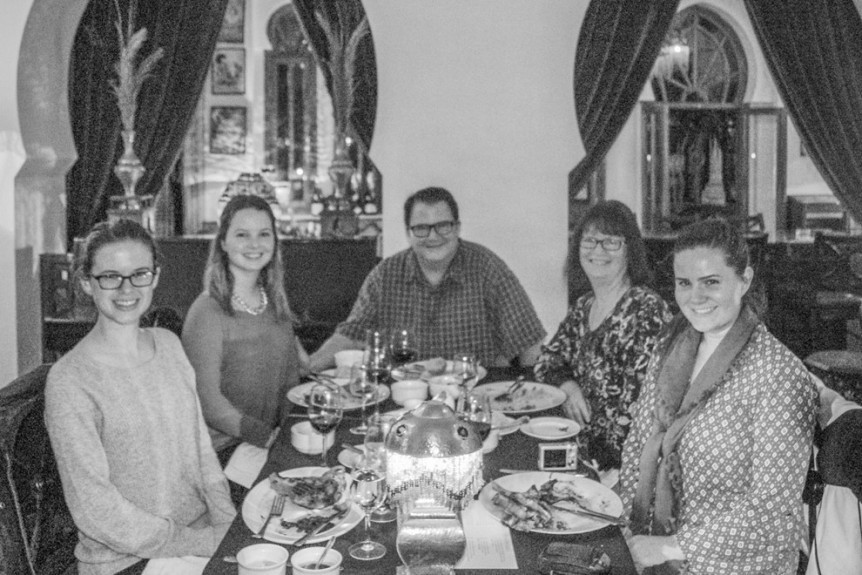