It was a full day train ride (with one train change) from Seville to Algeciras, Spain – a city of 115,000 souls located on the bay guarded by the rock of Gibraltar. From the Algeciras train station we took at 20 to 30 minute taxi to our hotel in La Linea de la Concepcion the Spanish town which immediately borders Gibraltar. (La Linea is a not too impressive town, I later found this article about the La Linea’s troubles: http://www.spiegel.de/international/europe/gibraltar-s-spanish-neighbor-la-linea-in-crisis-a-840854.html )

Here’s Holly about to enter the border crossing from Spain into Gibraltar: 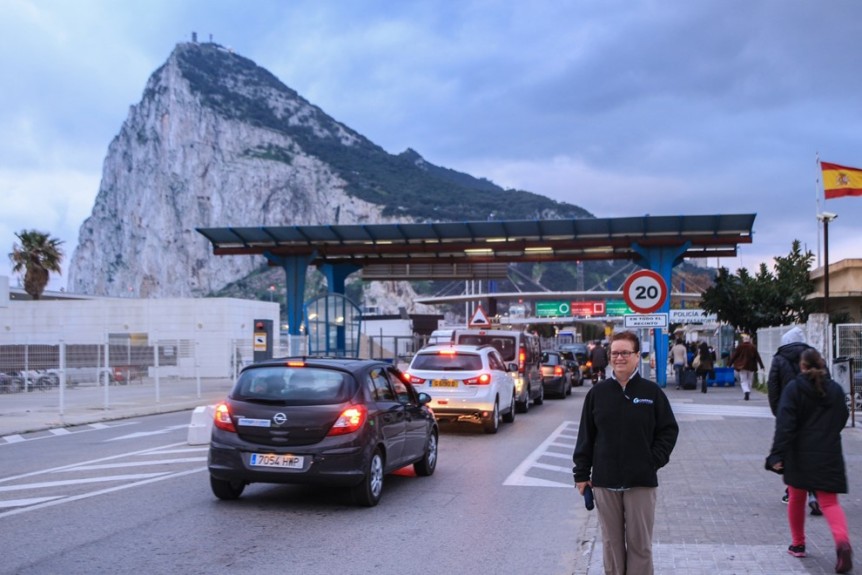 As you can see from the map behind me and Holly, Gibraltar is a peninsula jutting south from Spain towards Morocco. The peninsula is mostly The Rock, with a small town and an airport at the base. (Orientation for the map – North is left side, East is the top.)

To approach The Rock and the town of Gibraltar, you must cross the runway of the Gibraltar airport, either on foot or by car. When planes land or takeoff, the crossing is closed, like at a railroad crossing. Here’s The Rock as seen from the airport runway. 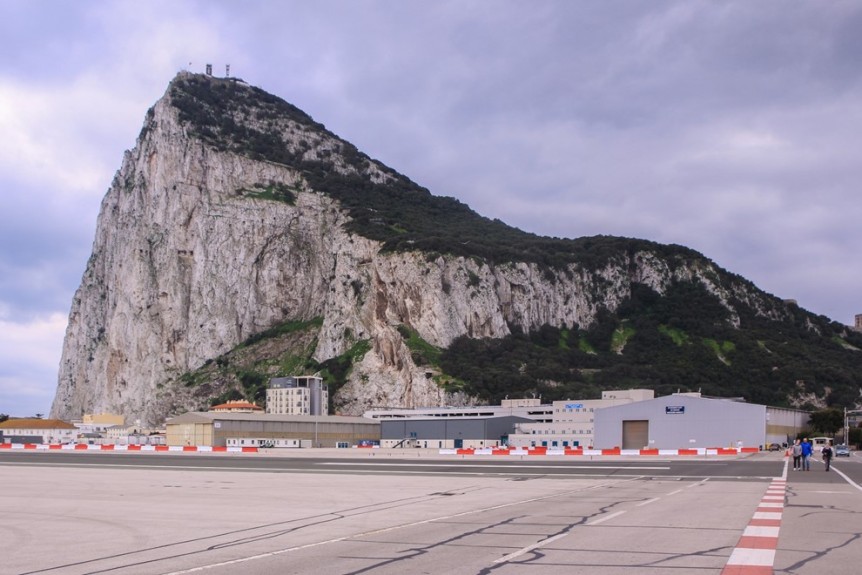 The best way to see Gibraltar is to take “The Official Rock Tour by Taxi”. Just after crossing the border (bring your passport) there is an office and a line of taxis – our taxi was really a mini-van. The cost seemed reasonable and our tour guide, Del – a Gibraltar native – we thought was a particularly good guide. Our tour group included another family of three from Spain and Del did a great job of giving us his commentary in both English and Spanish. 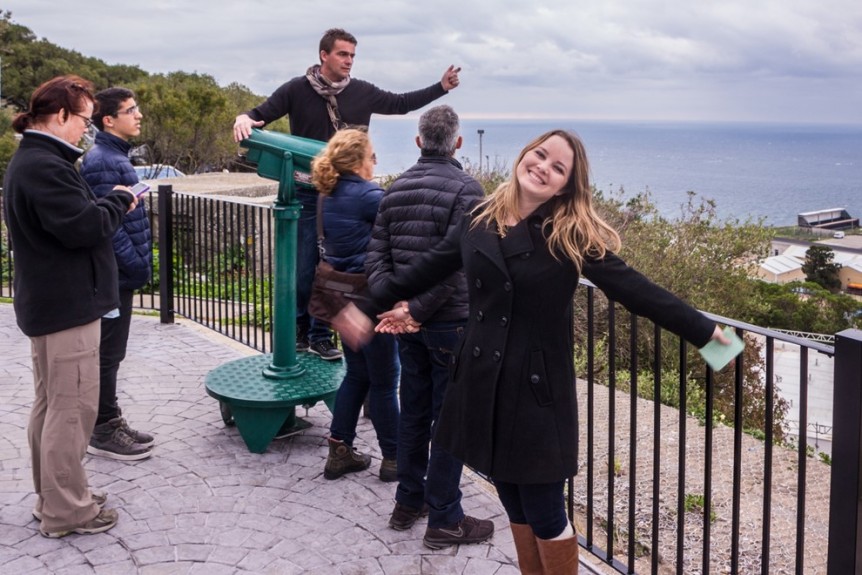 Our tour started at one of the Pillars of Hercules (Europa Point) at the southern tip of Gibraltar peninsula. From here you can look across the Strait of Gibraltar. To the south, Morocco is visible just 23 kilometers away (14 miles). To the east, the Mediterranean Sea and to the west the Atlantic Ocean. (Less than the distance from Los Angeles to Santa Catalina Island – 22 miles.) Morocco is visible just above the roof of the building in the photo below. (By the way, Great Britain has reduced substantially its military presence and much of the former military installations have become housing for Gibraltar locals.)

Re the name the Pillars of Hercules – from Wikipedia: The Pillars of Hercules (Latin: Columnae Herculis, Greek: Ἡράκλειοι Στῆλαι, Arabic: أعمدة
هرقل‎, Spanish: Columnas de Hércules) was the phrase that was applied in Antiquity to the promontories that flank the entrance to the Strait of Gibraltar. The northern Pillar is the Rock of Gibraltar (now part of the British overseas territory of Gibraltar). A corresponding North African peak not being predominant, the identity of the southern Pillar has been disputed through history,[1] with the two most likely candidates being Monte Hacho in Ceuta and Jebel Musa in Morocco. http://en.wikipedia.org/wiki/Pillars_of_Hercules

The largest of Gibraltar’s 150 caves, St Michael’ cave was used as an emergency hospital during WWII (in the event the military hospital was attacked – it wasn’t.) More recently a major portion of the cave has been transformed into a really neat performing arts theater, hosting for example the recent Miss Gibraltar pageant.

I’m tempted to say here are two old fossils found in the cave, but we are NOT that old – yet.

From Fodor’s Spain 2014: “The famous Barbary Apes are a breed of cinnamon-color, tailless monkeys (not apes, despite their name) native to Morocco’s Atlas Mountains.” (These monkeys will make another appearance in a future blog post.) “Legend holds that as long as they remain in Gibraltar, the British will keep the Rock; Winston Churchill went so far as to issue an order for their preservation when their numbers began to dwindle during World War II.”

We were warned to beware the monkeys would grab purses, food or cameras and to be careful with our items. This monkey jumped onto the roof of our van before we could even come to a stop. Later, another medium sized monkey jumped on Rebecca, giving her quite a start.

Parental Warning: Upcoming content may not be suitable for children or people offended by nature documentaries. Continue reading at your own risk.

“Monkey Business”, or “How little monkeys are made”, or “Can you guys get a room?” – You pick the title of this photo.

At least we know the monkeys do more than eat and groom each other.

Here’s a couple of photos we took of ourselves in front of the point of the Rock at the Ape’s den: 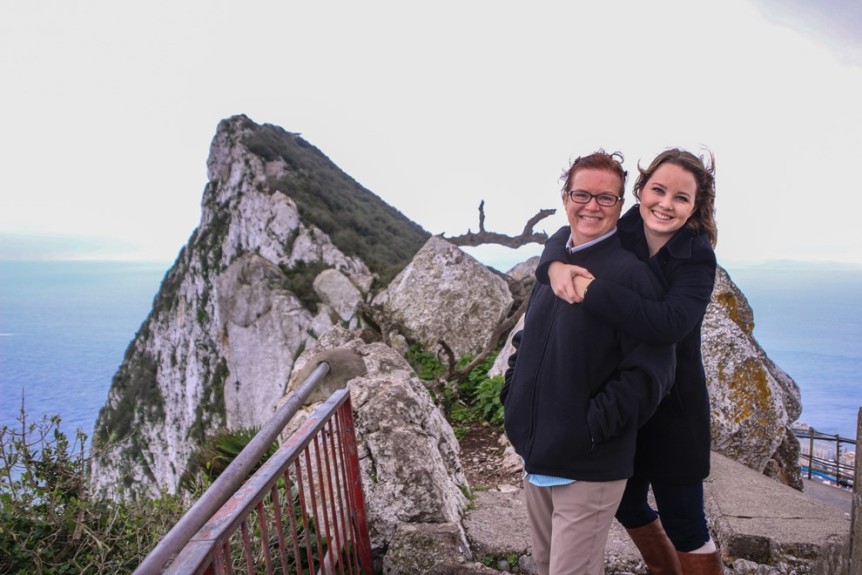 Here’s a photo of a mother grooming her baby: 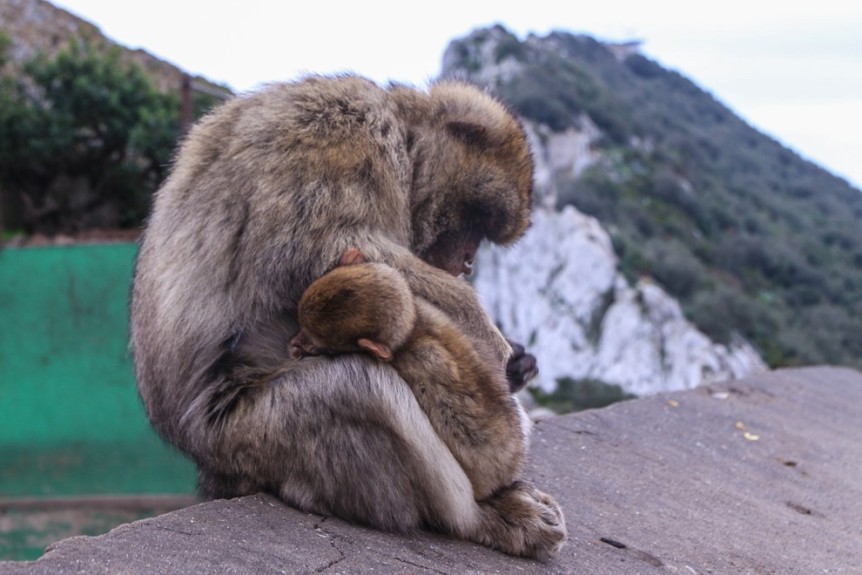 That same baby sitting in her mother’s lap being groomed:

Our tour continued around to the east side of the rock. From the entrance to the Great Siege tunnel, is this view of the Gibraltar airport and beyond the airport the Spanish city of La Linea de la Concepcion. 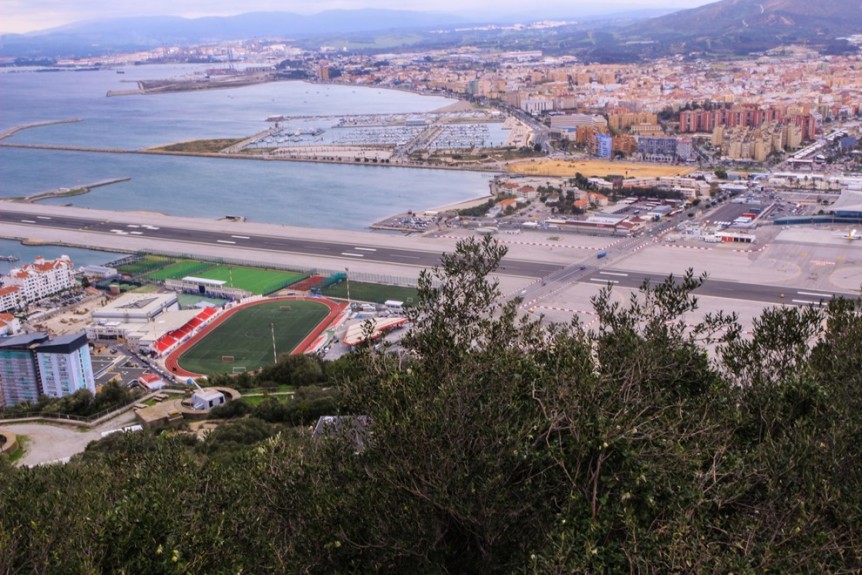 Extensive defensive tunnels have been dug into the Rock for centuries. The Great Siege Tunnels were carved out during the Great Siege of 1779-82 by the British to defend against the Spanish. 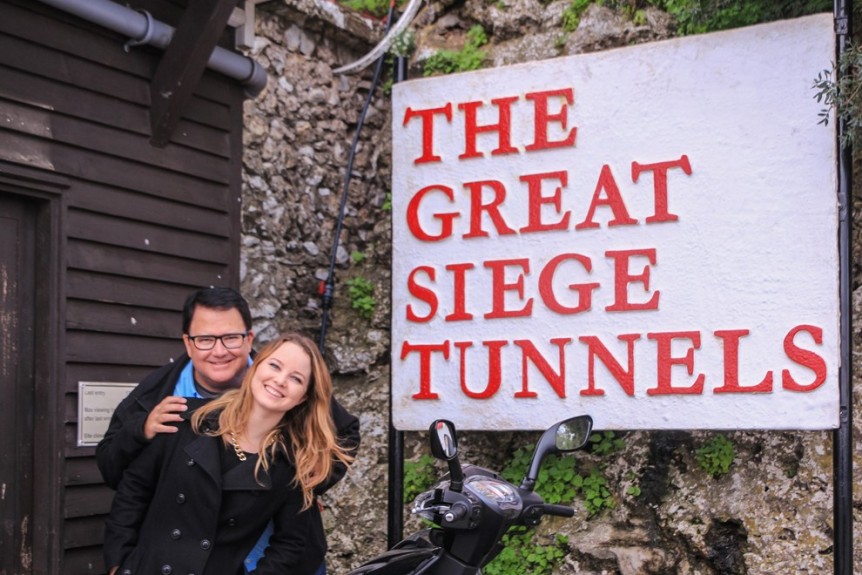 This opening in the tunnel is perfectly sighted to rain cannon fire down on Spanish invaders.

This room in the Great Siege Tunnels allowed the British to fire in 180 degrees to protect Gibraltar and keep the Strait open to British ships. 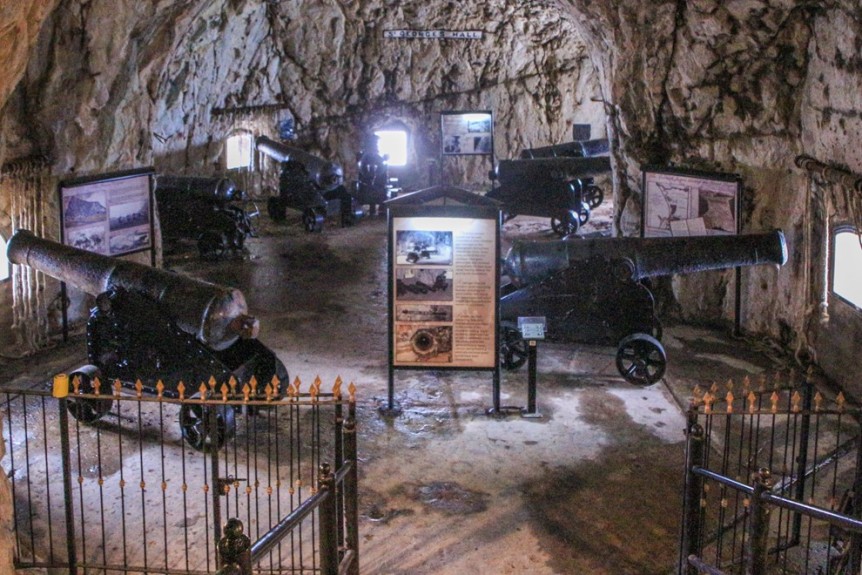 After the tour, we walked through the little town and ate lunch at Sacarello’s. Lunch was good, and I could have spent a little more time in Gibraltar.’

Holly and Rebecca in Casemates Square:

Unfortunately, we didn’t have a full day in Gibraltar. Our plan was to get to Tangier, Morocco before nightfall. We left Gibraltar, the same way we entered – by walking across the airport runway to cross the border back into Spain. There we picked up a taxi who drove us to our hotel to collect our luggage and then on to the port city of Tariff, Spain* to catch a ferry across the Strait to Tangier.

The fast ferry takes about 1 hour to cross the strait. I suggest you immediately get in line to have your passport stamped on-board. Holly knew about this, and I poo-pooed it. She was right, by the time she and Rebecca got in line, it took them the entire crossing to get to get our passports stamped. Docking in Tangier, we disembarked and began our journey through Morocco.

Coming up: “You Are Welcome” – Morocco, a mix of old and new – mostly old.

*”Tarifa was given its present name after the attack of Tarif ibn Malik in 710, a Berber military commander of Musa bin Nusayr.[3]
Tarifa is sometimes credited with being the origin of the word “tariff“, since it was the first port in history to charge merchants for the use of its docks, but other sources[5] point to the Arabic word ta’rïf, as the origin. The name “Tarifa” itself is derived from the name of the Berber warrior, Tarif ibn Malik.” http://en.wikipedia.org/wiki/Tarifa