Queen Mary 2: The Voyage Home – Rocking, Rolling, Dressing Up, Dining and Relaxing on the North Atlantic.

The final leg of our Around the World trip was a Trans-Atlantic crossing from Southampton, England to New York City aboard the Cunard Line’s Queen Mary 2.

We had a nice stateroom with a balcony on deck 11. Our stateroom was very comfortable and this room is actually much larger than our hotel room in London, so we were pleased. By the way, please don’t refer to staterooms as “cabins”. Here Holly settles in and we prepare to enjoy a bottle of champagne left in our stateroom by Cunard to welcome us aboard.

The ship was decked out for Christmas and we enjoyed the decorations throughout the trip. Holly particularly enjoyed this ‘Wind in the Willows’ caroling scene. 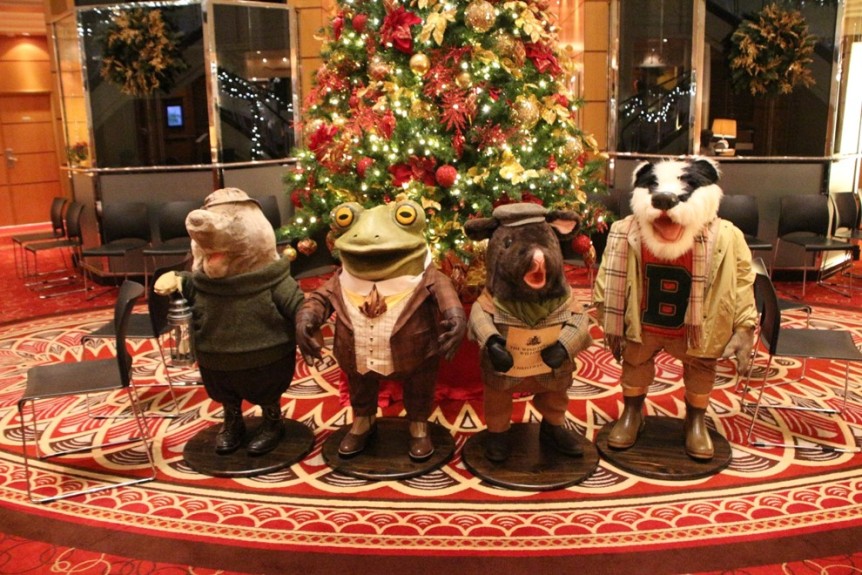 The upside of the Trans-Atlantic Crossing in December is the wonderful Christmas decorations. The downside, is the rough North Atlantic winter seas. The crossing takes seven days and the first four days we experienced what the Captain described as “very rough” seas. Waves and swells measuring 18 to 25 feet, meant that the ship’s decks rolled and rocked continuously for the first four days. The captain on his daily announcement continually reassured the passengers that the Queen Mary 2 was built for just such conditions and is the very best ship in the world for sailing as smoothly as possible in rough seas. I took this picture from our balcony on deck 11 and it doesn’t really show the size of the swells. When we would eat meals in the dining room on deck 2, it was hypnotic to watch the swelling seas which occasionally hit the windows.

Because of the rough seas, we didn’t take advantage of some of the activities available during the day; we didn’t want to get seasick by sitting in closed off rooms. We used the time to get some much needed rest. By the end of our almost four month trip, we were worn out. We slept in and took afternoon naps for the first few days. We did however take advantage of the dining room. We ate in the Britannia Dining Room with another couple – Roger and Alison. There were two other people at our table, a mother and daughter who didn’t return again for the rest of the cruise. Roger suggested that perhaps they fell overboard, since we never saw them again, even in passing on the ship. 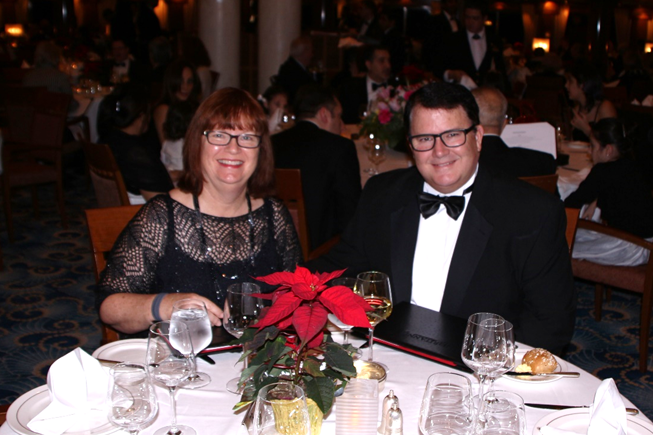 Roger and Alison on the proprietors of a guest home in the Southwest of England. They were terrific company and we enjoyed making their acquaintance.

Here’s the Britannia Dining Room from the second level. Our table is immediately to the right of the large round table in the middle of the room. Holly is sitting alone at our table in this picture with her back to the camera.

The service we had at dinner every evening was terrific and our waiter, Froilan, was great. Although we had other dining options, we never really considered them because we were so happy with the Britannia dining room. Froilan was friendly, efficient and made very helpful suggestions. At breakfast we did not sit at the same table and had different wait staff and I thought the service was poor to fair. I was surprised by the level of the service at the non-dinner meals. Here is Froilan with Holly and Alison. Another nice feature of the Britannia dining room was the harpist’s playing during our evening meal.

Three of the seven nights were “formal nights”, men wore either a tuxedo or a dark suit and tie. I rented a tuxedo onboard the ship. Holly wore the clothes she bought in England. On “informal nights” jackets were required and jeans were not permitted, but a tie is optional. Most men, including me, still wore a coat and tie to dinner on the “informal nights”.

On the second formal night, the Commodore hosted a cocktail reception. Here we are with Commodore Christopher Rynd. As “Commodore”, Christopher Rynd is Cunard’s senior captain and holds responsibilities within Cunard beyond the Queen Mary 2, including for example overseeing the training of crew members. 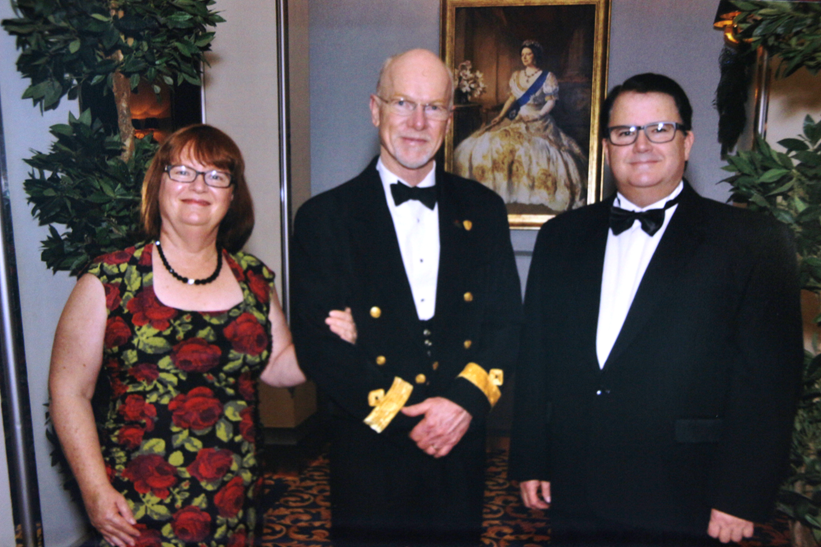 Here the Commodore address the passengers at the cocktail reception in the Queen’s Room and introduce his senior staff.

The third formal night of the crossing the ship hosted a Masquerade Ball, again in the Queens Room with dancing to a live orchestra.

I’m certain that you’d never guess, but yes, that us behind these clever masks. In addition to the Masquerade Ball and the Black and White Ball, there was also very good entertainment each night. We particularly enjoyed one show that showcased the dancers.

Finally before dawn the morning of the seventh day of the cruise, we arrived in New York only one hour behind our scheduled arrival time. It was remarkable that the ship was able to make up so much time despite deviating south from the planned route to avoid worse weather. We sailed into New York harbor beneath the Verrazano-Narrows Bridge which connects Staten Island to Brooklyn. Although, it was probably just my perspective, it seemed that the top of our ship barely cleared the bottom of the bridge. Here’s my photo of the Verrazano Bridge:

We passed by the Statue of Liberty as we entered New York harbor and of course I couldn’t help but think of all the immigrants to our country who viewed Lady Liberty as they came to our country to build new lives for themselves and their posterity in land most blessed by God with freedom and opportunity. Fortunately, our stateroom was on the port (left) side of the ship, so I was able to take photos of the Statue of Liberty from our balcony while also eating breakfast and preparing to disembark the ship.

Of course I also took pictures of the Manhattan pre-dawn skyline. The tall tower on the left of the picture is the newly built Freedom Tower erected on the sight of the former World Trade Towers.

Once we docked, we disembarked, cleared customs (customs was fast and easy) and hopped into a taxi to take us back to Penn Station to “close the loop”, returning where we started our around the world adventure. Our taxi took us across the iconic Brooklyn Bridge into Manhattan on a Sunday morning as the sun was just coming up. It was magical. I wish I could have stopped the taxi on the bridge to take a picture.

We had asked our cabin steward to find us some cardboard we could use to make signs for our final pictures. We spent about half an hour walking around Penn Station with our luggage and these signs asking strangers to stop and use my camera and Holly’s iPhone to take pictures of us. People would walk by, read our sign, and then stop and talk with us and ask us questions about our trip. It was fun and the attention we drew made us feel like celebrities for a few minutes. The signs read:

We were elated to have completed our Around the World trip by rail and sea. Here’s a summary of the place we visited:

A final photograph of the intrepid travelers on the Atlantic Crossing home-bound: