We traveled from Amsterdam to London via train with a change of trains in Brussels, Belgium. Of all our travels on this trip around the world, we have not passed through a country without stopping. Unfortunately in Brussels, we only saw the inside of the train station. Here Holly waits in the Eurostar lounge of the Brussels train station.

From Brussels, we rolled into London on the Eurostar, a high speed train, via the Chunnel. The Eurostar is nice, but didn’t seem as high tech and sleek as the bullet train we took from Shanghai to Beijing.

Our priority in London was different from the other cities we visited on this trip. London was the first city on this trip both Holly and I had been to before, so we didn’t feel a need to try to see the city in our limited time. Our goals were simple:

Because of the bombing of London, Churchill needed a secure location safe from Nazi bombs. Fortunately this underground complex had been prepared in advance of the start of England’s entrance to World War II. Here is the War Cabinet Room, with Churchill’s seat in the middle in front of the map.

Here I am next to a sign in the bunkers with a surface weather report. There is a slot on the right end of the frame and the appropriate printed weather report was inserted for the information of those working below ground in the bunker. 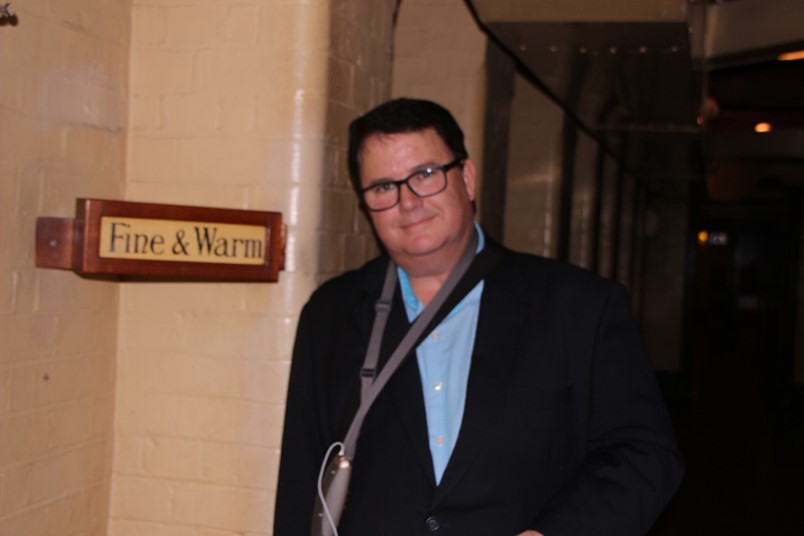 There are several offices which doubled as bedrooms for senior staff.

The map room. (Those are wax figures, not live actors.) 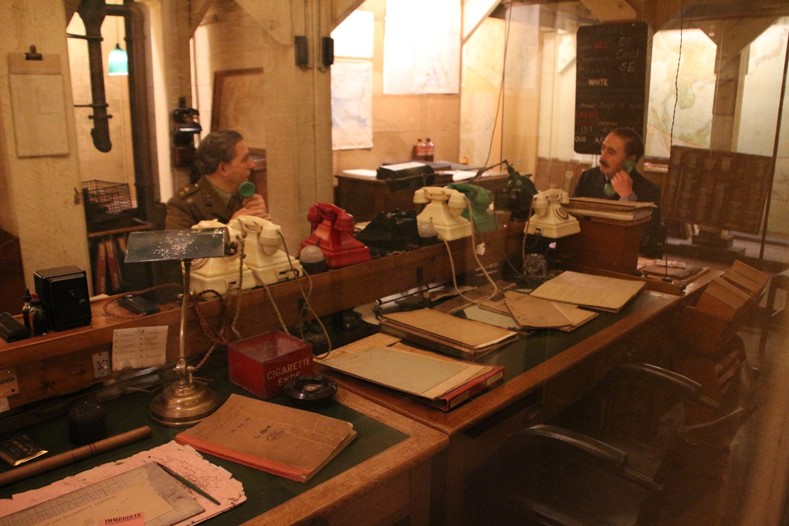 A section of the underground facility has been transformed into The Churchill Museum which tells the great man’s life story. Here’s a photo of an “Enigma Machine”. This machine developed by the Nazis to encode their messages, came into the hands of the Allies allowing them to read the German’s messages throughout the war.

The Churchill War Rooms, are just a stone’s throw from the Houses of Parliament and Big Ben.

Kate, our oldest daughter spent her sophomore year in London as part of Pepperdine’s study abroad program about 6-7 years ago. Rebecca, our youngest daughter will likewise be studying in London begin this fall at Pepperdine’s London House. Holly and I thought it would nice to stop by and take a look, so Holly contacted Dr. Carolyn Vos Strache, the very gracious director of the London program and she invited us to stop by for a tour. Here’s a photo of Pepperdine’s London House: 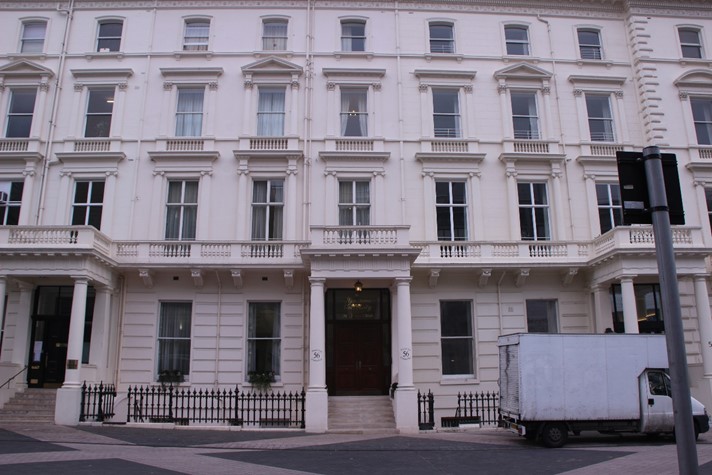 We found London’s streets a little confusing because some of the street names continue around corners. We did eventually find our way to Pepperdine’s door. Carolyn proudly showed us the recently remodeled interior, with new furniture donated by an alumni parent who owns a furniture factory in China. We didn’t see the facility prior to the renovation, but it looks great now. Rebecca is going to have a wonderful time.

When Kate was in London, Dr. James White and his wife Penny were the faculty in residence, along with Tom & Sheila Bost (Law School faculty in residence). The Bosts are good friends of Holly’s family and Tom sent Holly’s dad occasional updates on Kate while in London. 6 years later, both the Whites and the Bosts are back in London. (It would have been too perfect for them to be there when Rebecca comes this fall, but they’ll be back in Malibu.) Kate treasured her time with the White’s and their children, Jonathan and Rachel. After they all returned to Malibu, Kate continued to be with them on a weekly basis at a bible study in the White’s home. Our daughter was truly blessed by their friendship.

We met the White’s two children and are very impressed at how mature and self-possessed they both are. Here’s a group photo: (from left to right) Tom Bost, Rachel White, Penny White, Dr. White, Jonathan White, Sheila Bost, Dr. Carolyn Vos Stache.

Faithful readers of this blog will remember that we made a friendship with fellow travelers Mark & Jenny from England. They had spent 5 years working in Australia and then a year and a half traveling around Australia and New Zealand. For their trip home to the U.K., they took the train from Vietnam to Beijing, and from Beijing traveled to Mongolia and Russia on an itinerary very similar to ours. We first met them on the train from Beijing to Ulaanbatar. Ran into them in a grocery store in Ulaanbaatar. Then ran into them again on the train to Moscow from Yekaterinburg and shared the vodka they’d bought in Mongolia. In Moscow we enjoyed a dinner before a ballet at the Bolshoi and then we last saw Mark & Jenny in St. Petersburg at the Mariinski Theater for a performance of the Nutcracker.

We met up with Mark & Jenny at an Indian Restaurant they selected: Dishoom, which bills itself as a Bombay Café in London. It was a wonderful restaurant, the food was terrific, and we were lucky to get this table because it was very busy while we were there. We each shared our travel stories since St. Petersburg. Mark & Jenny returned to London from St. Petersburg by traveling through the Baltic countries, part of which they did by bus because there was no train available. Jenny & Mark and both accountants. Jenny has secured a position with her previous firm and Mark is still in the midst of his job search. He had just been to an interview prior to joining us at lunch. They are great company and we were glad we got to know them a little on our journeys. We hope our paths cross again. 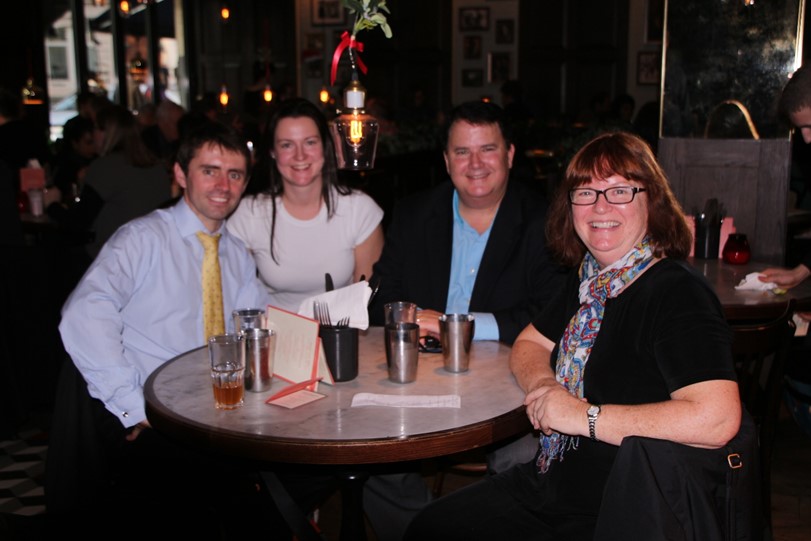 A random photo of me in a London phone booth. It’s nice to know that somewhere in the world phone booths still exist.

We bought tickets to see a performance of Richard II by the Royal Shakespeare Company. I’ve never seen Richard II performed and I wasn’t familiar with the story line. It’s the story of how Richard II lost his throne (and ultimately his life) to Henry Bollingbroke, the Duke of Hereford, who later becomes King Henry IV.

Here’s a photo of the Barbican Theater:

When Shakespeare’s Richard II opens, the King’s Uncle, the Duke of Gloucester has been murdered. Here’s a photo of the stage set with the Duke’s coffin prior to the beginning of the show.

In Shakespeare’s play, Edward’s capriciousness leads to his downfall. To quote Helen Castor from the play’s program: “…These were issues that played a critical part in the historical events of a reign shaped by tension between competing conceptions of royal authority: the ‘top-down’ principle that an anointed king had a God-given right to rule, and the ‘bottom-up’ assertion that the monarch’s responsibility was to defend the interests of his people.”

As we’ve traveled around the world on this trip, I’ve realized how fortunate we are to live in the United States. The blessings of our society: freedom, private property, common law, democracy and representative government are rare in history and are still rare in much of the world. In many of the countries we visited, people told us about the “corruption” in the government (not “their” government, “the” government) and express little hope that the rigged system as they saw it would get better. The American Experiment didn’t happen in a vacuum, we inherited a tradition of freedom from the British and we Americans took it to another level. One only has only to look at the English speaking world today (and those countries that have modeled themselves after our system – think Japan), and see how we stand in contrast to much of the world. I’ve been reading an excellent book – Inventing Freedom: How the English Speaking Peoples Made the Modern World by Daniel Hannan
that makes this case and traces the history of England in the process. In Shakespeare’s Edward II, we see how England was different very early on, replacing a King who did not respect the rule of law and the rights and property of his subjects.

Here’s a photo of a double decker bus in Sloane Square decked out with Christmas lights:

Our most important job in London was to shake off our “inner hobo” and purchase some clothing so we wouldn’t look like refugees among the passengers of the Queen Mary 2 on our Trans-Atlantic voyage. Because of the nature of our trip, (mostly train travel), and the length of the trip, (110 days in all), we limited ourselves to one rolling bag and a day-pack sized backpack each. We each had one reasonably nice outfit we could wear to operas, ballets, nice restaurants or any occasion where we had to dress up. Other than that we had mostly standard polyester travel clothing that can be washed in a sink. By the time we reached England we were tired of these clothes and they were looking pretty well-worn.

Our first thought was to go to Harrods, seen below:

Harrods is beautiful and wonderful to look around in, but not really a great place for Holly and me to buy the kind of clothing we are comfortable wearing. This nice Harrods doorman was very pleasant and allowed me to take photos of him:

After an unsuccessful try at Marks and Spenser, Holly found her new “favorite” store – Peter Jones in Chelsie off Sloane Square. She used a personal shopper (free service) who brought her countless outfits to try on. For Holly this was just the ticket and she was able to buy a number of outfits in a short amount of time. She looking really good on this crossing, and is ever so relieved to not be wearing the 5 tops/3 pairs of slacks combination that has been the sum total of her wardrobe for the past 103 days! She would burn the old clothes, but being mainly of polyester, they would only melt. Instead, there was a clothing donation bin near our hotel and we dropped off a number of items rather than bring them home.

I purchased my clothes at shop named “High & Mighty”. I think the name describes the type of men’s store this is. Let’s just say, ahem, it’s not a store for little people.

London is always great. We are looking forward to returning, we hope, to visit Rebecca when she’s there next year.