A tasty bite of South Korea – Our day in Busan

Korea is amazing! Consider the country’s modern history, occupation by China and later Japan – our lecturer Dr. Leavell called Korea the Poland of Asia. Then suffering a devastating war with the communist north and partition following WWII, the annual per capita income at the end of the Korea War as $75. Today it is $35,000.

South Korea, like Japan, is a modern industrialized country, thanks to the blessing of being occupied by the United States after WWII and embracing capitalism and democracy. (Also, about 35% of Korea has embraced Christianity – another positive influence in my opinion.) Unlike Japan, Korea was not rebuilding an industrial economy that had existed before the War, they created a modern economy from literally nothing solely through incredible hard work, sacrifice and determination. I have nothing but admiration for the people of Korea, and I can’t help but feel sadness for their family members trapped in the world’s largest gulag – North Korea.

Busan (It used to be spelled Pusan) is the second largest city, after Seoul, with a population of 3.6 million souls. Located on the southeastern tip of the Korean Peninsula, Busan is Korea’s largest port. It’s a little over 100 miles to Japan. There are high speed hydrofoils and ferries that carry people back and forth to Japan. Here’s a photo of a hydrofoil entering the harbor at Busan:

The Diamond Princess arrived in Busan at 8 a.m. Here’s a photo of downtown Busan taken as we rounded the point to enter Busan harbor:

Our shore excursion took us first to the Bulguksa Temple, which means “Temple of the Buddha Land”.

The Bulguksa Temple is home to seven Korean national treasures and is listed as a UNESCO World Heritage Site. Perched on the slopes of Mt. Tohamsan, this temple was built between 751 A.D. and 774 A.D. The temple served as a center of Silla Buddhism and of prayer for the protection of the country from foreign invasion. The entire temple was burnt by Japanese invaders in 1593 because the temple was used as a base of the volunteer militia. Though the main hall and a few outer buildings were rebuilt, it was not until 1969-73 that it was completely restored after thorough research, investigation and excavation of the ancient temple site.

Here we are at the entrance to the Bulguksa Temple.

The first gate contains representations of the four guardians, each guarding against evil spirits from one of the four points of the compass, North, South, East and West.

Holly in front of the first gate:

The front of the main temple complex: 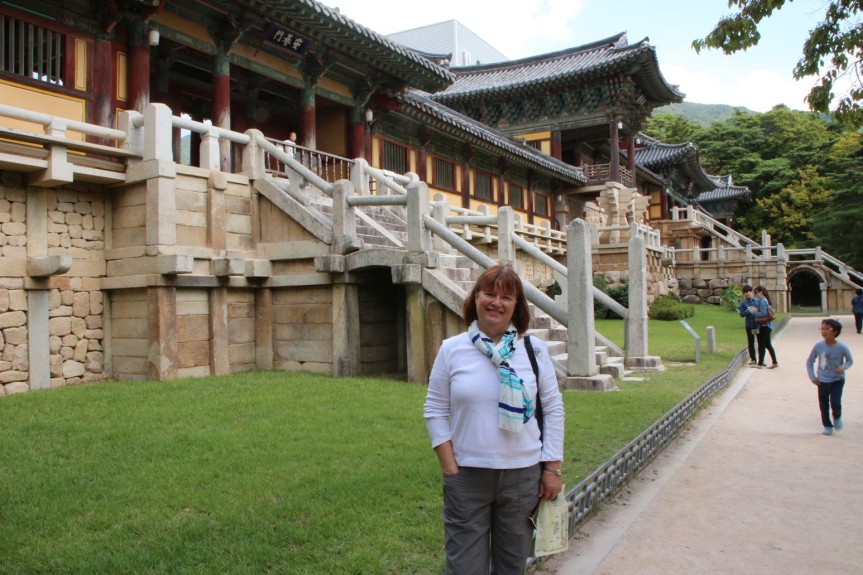 Inside the main temple complex is this three level pagoda. Pagodas are erected to contain relics of Buddha: 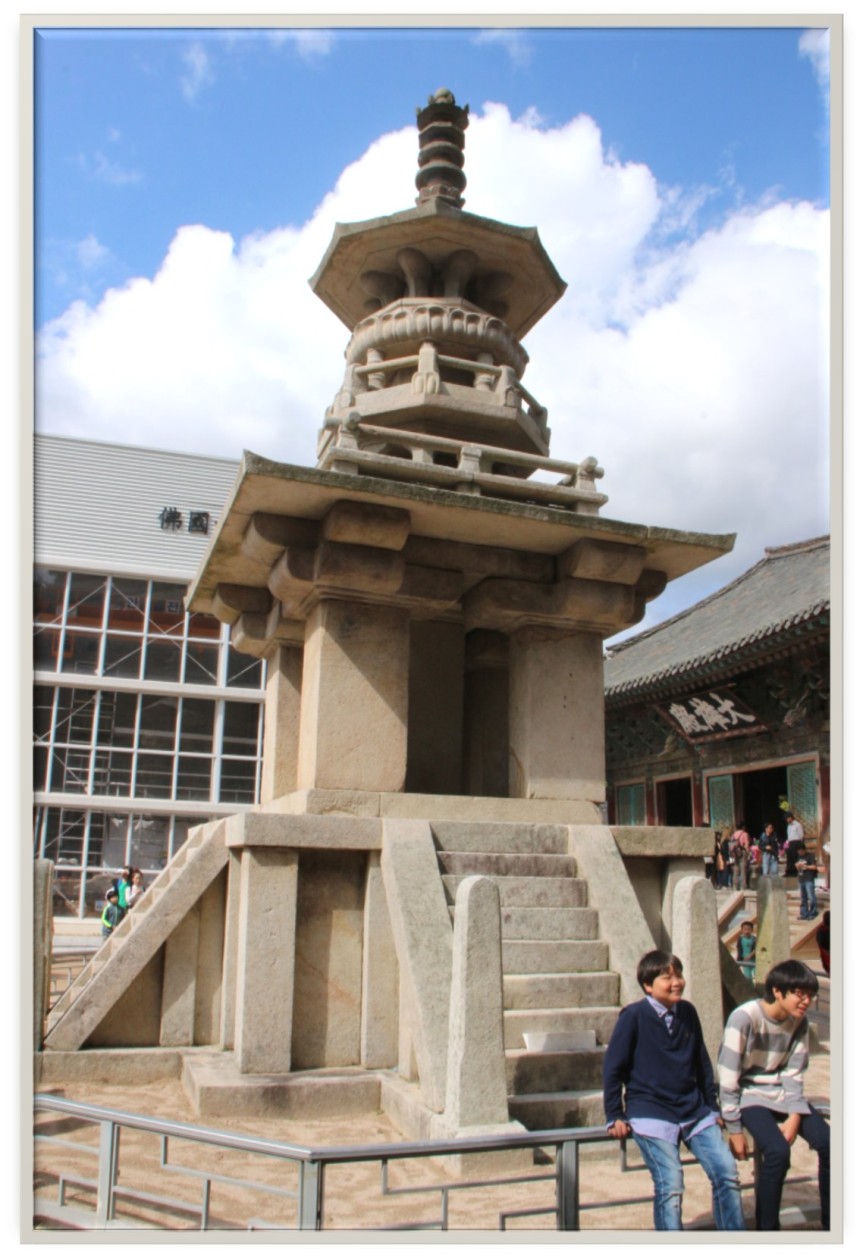 These two statues of a seated Buddha are gilt bronze: 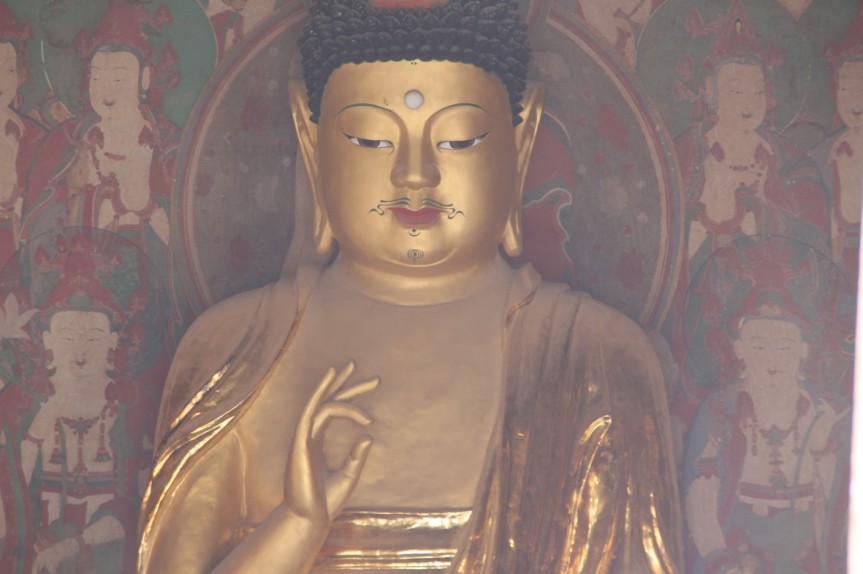 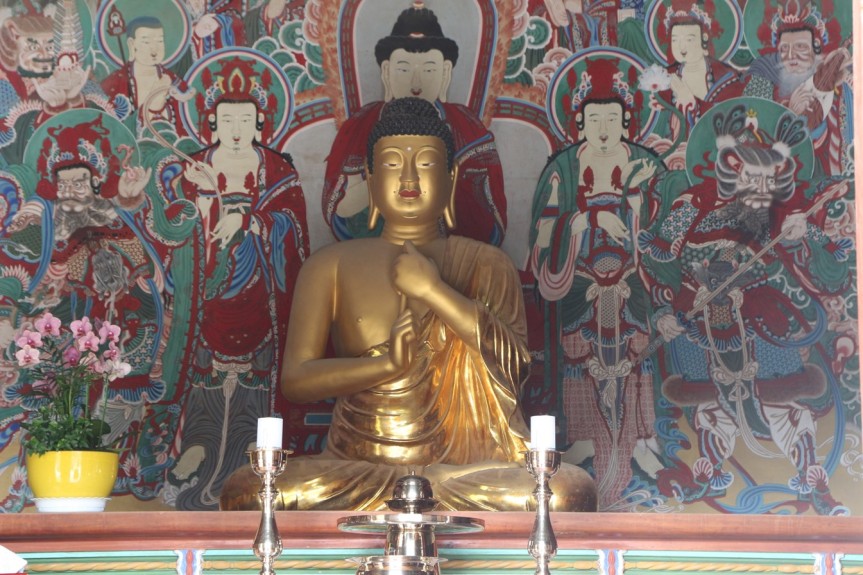 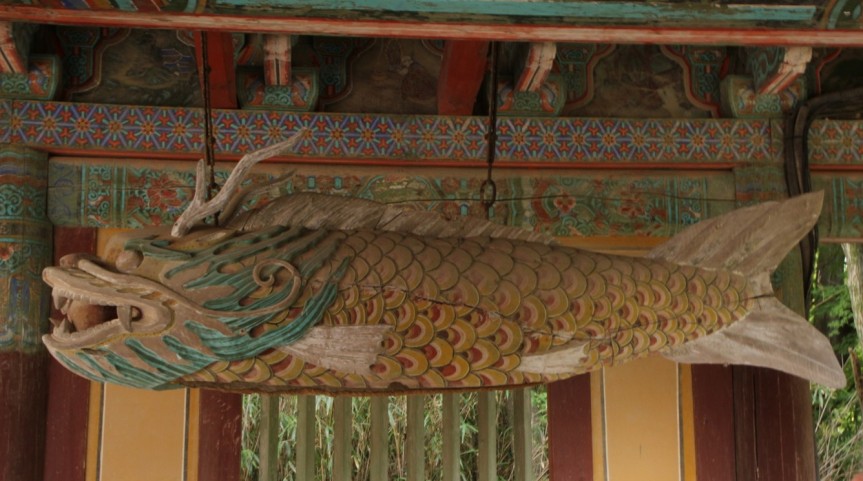 In one part of the temple area, people pile little stones to make “Pagodas” and make wishes. Below is a photo of a young boy making his own “Pagoda”. It was a National Holiday when we were in Korea so there were families out everywhere we went enjoying the nice sunny day. 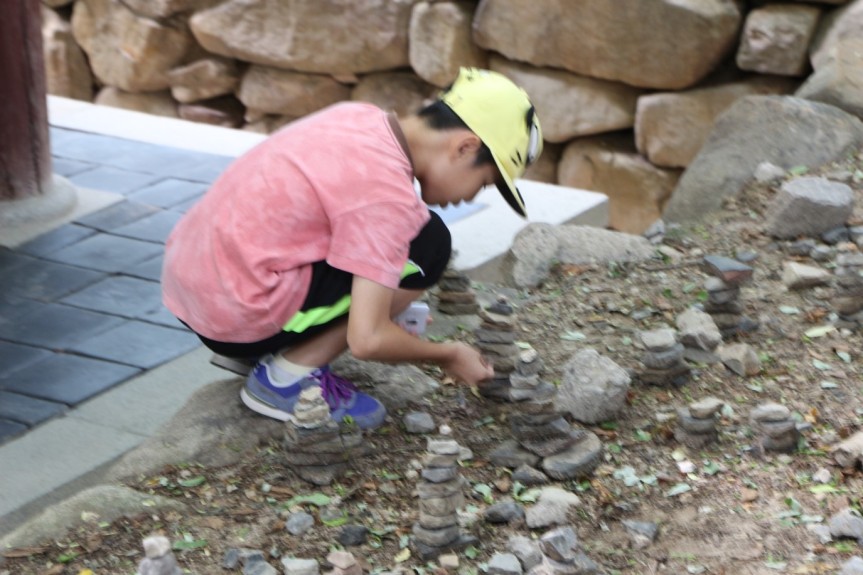 The grounds of the temple are beautiful. Especially the trees.

When we finished at the temple, our tour proceeded to the Commodore Hotel in Gyeongju for a buffet lunch that included Korean delicacies, including Kimchee – spicy but good. 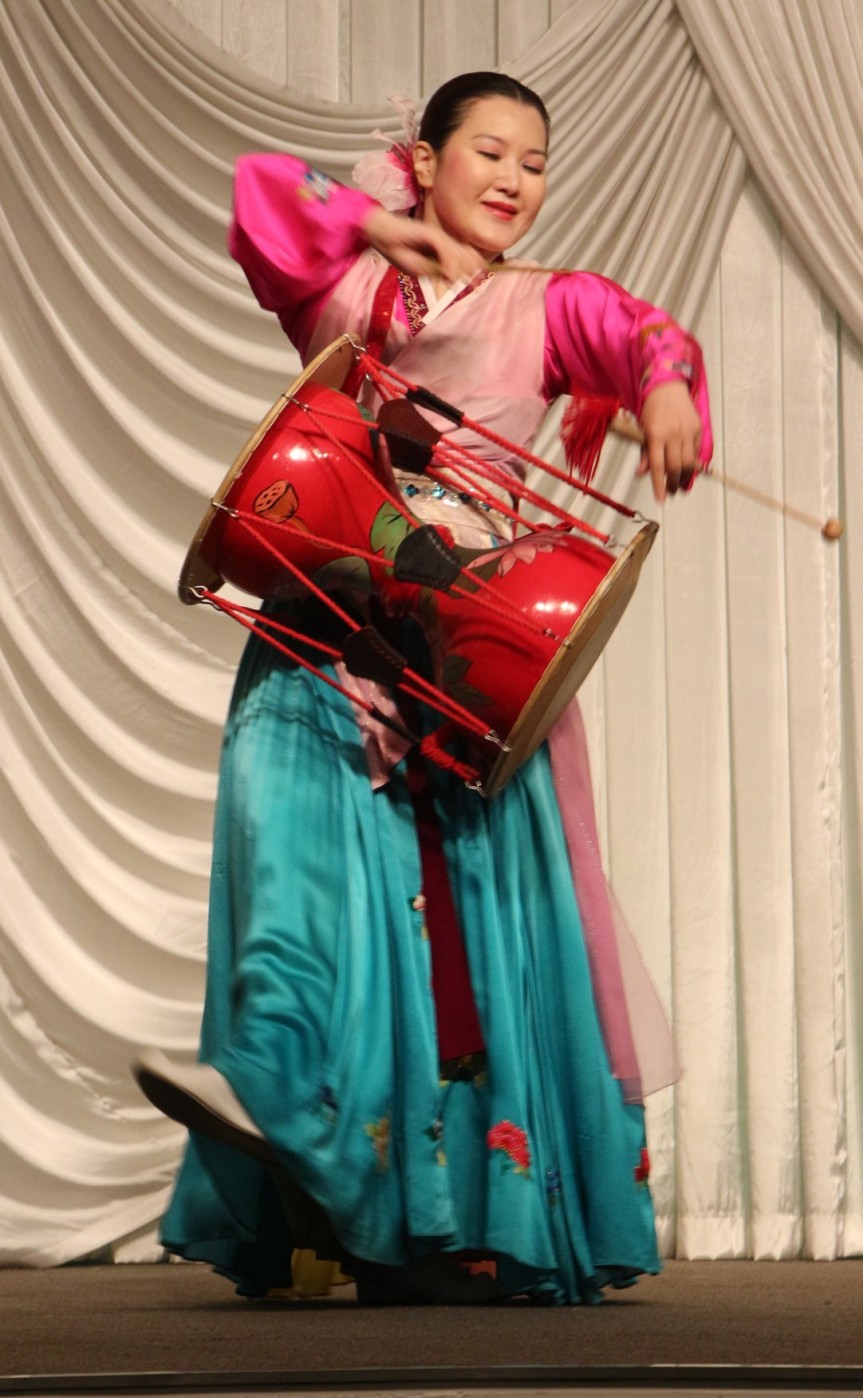 After lunch we continued our tour to Tumuli Park where there are royal tombs. These tombs built during the Silla Dynasty, 668 A.D. to 926 A.D., are shaped like mounds to resemble mountains and to be harmonious with their environment. Some of the mounds were decoys, built with no tombs inside to confound potential grave robbers. Tombs were built by digging out the grave, putting six meters of stones atop the grave, covering that with clay to seal the tomb and then covering it with earth.

One of the tombs opened at Tumuli Park yielded beautiful gold crowns, necklaces, etc. We were able to enter the tomb to see inside. At the nearby Gyeongju National Museum, there was a display of the artifacts taken from the tomb we had entered including this gold crown.

This stone structure is an astronomical observatory. According to our tour guide, this is the oldest observatory ever built, around 500 A.D. I’m not sure about the accuracy of that statement. I would have guessed that ancient Mayan observatories were older, but I wasn’t going to debate our host for the day.

The single most frustrating part of this “Grand Asia” cruise has been our stops in Japan and Korea. Spending only one day in countries like Japan and Korea, while fun and interesting, leaves us wanting to really see these countries in a much deeper way than is possible on an 8 hour shore excursion. Holly’s comment after our visit to Korea was that before our visit, she was not that interested in visiting Korea, but now she is very interested in returning.

I was already interested in visiting Korea and after our visit, I’d very much like to return to see more. We didn’t really see much of the city of Busan and of course, there’s Seoul and the DMZ to visit.

I’ll leave you with a picture of ladies weeding the lawn at the Gyeongju National Museum and the sunset as we left Korea.