Vladivostok is the Pacific terminus of the 5,778 mile long Trans-Siberian Railway. Running from Moscow in the West to Vladivostok in the East, the Trans-Siberian Railway is the longest continuous rail track in the world, linking Moscow with its huge territories and opening the Pacific Ocean in much the same way the U.S. Trans-Continental Railroad linked the United States with its western territories and the Pacific (both built in the late 19th century). The railway station in Vladivostok is built to mirror Moscow’s railroad station, emphasizing the unity of Russia.

That’s the Vladivostok train station behind us (and in front of our ship) in the picture below: 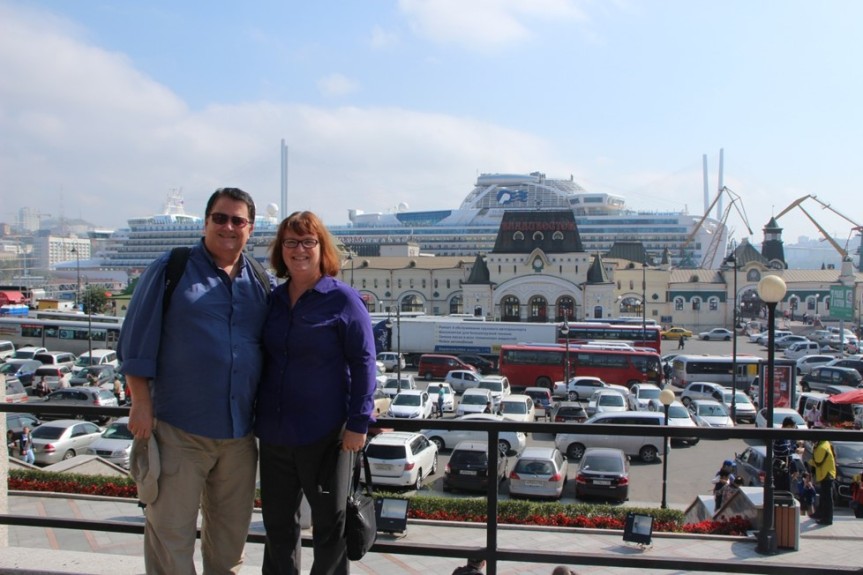 The picture of us above was taken standing at the foot of the statue of Lenin (picture below) which dominates the square opposite the Vladivostok’s train depot and greets all passengers arriving after their Trans-Siberian journey: 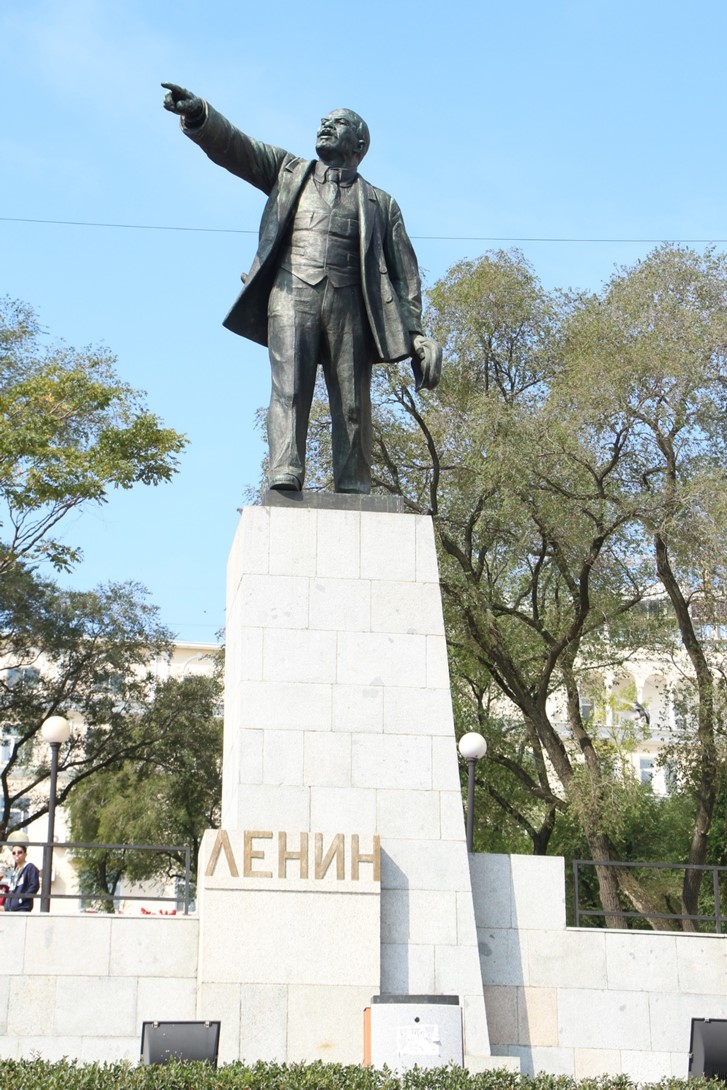 Traveler’s Tip: If you are looking for a restaurant or WIFI, there is a restaurant named “Republic” right next to this statue (in the direction Lenin is pointing). Republic is a local chain that serves food cafeteria syle. This is helpful if you don’t have a working knowledge of Russian, because you can see what they have to offer and point at what you want. At the bottom of the receipt they print the code for their WIFI, which works great. We had a nice lunch here and I updated my email while Holly had a Skype conversation with Kate.

From the Russo-Japanese War, through World War II, the Cold War, to today, Vladivostok has been the main Russian Naval base for the Pacific. During the Cold War Vladivostok was a “closed” city. Even Soviet citizens needed permission to come to here. Our tour guide Oxana was born in the Ukraine. She told us about her father who had to receive permission to move to join the Merchant Marine and move to Vladivostok.

Because of Vladivostok’s military importance and history, there are numerous monuments and a WWII era submarine that has been converted into museum (see photo below):

They even let me take temporary command of the submarine museum and Holly load the torpedo tubes. J 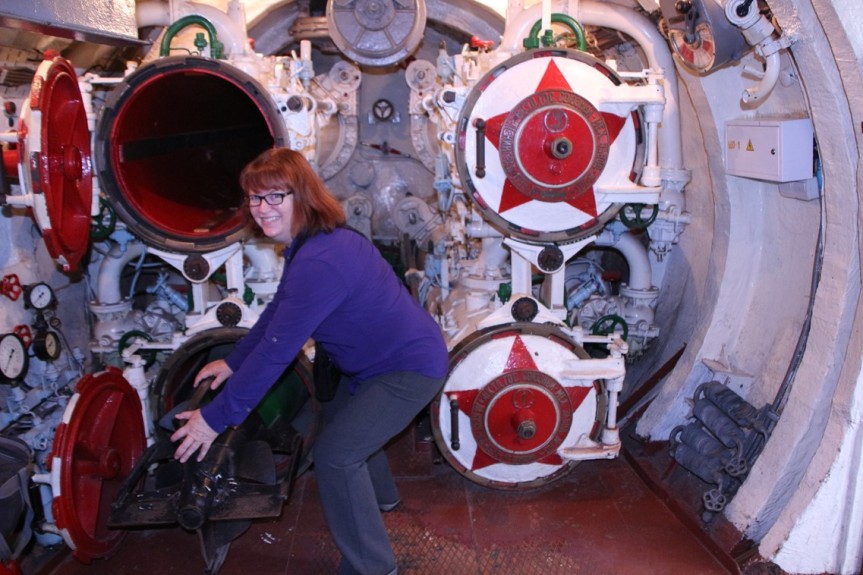 The “Monument to Fighters for Soviet Power in the East”:

Here’s a close up of the frieze on the back wall of the monument:

On the lighter side, Vladivostok is also the birth place of the actor Yul Brynner – the King from The King and I. The house he was born in has had a plaque for many years, and a few years ago, a statue was erected in a small park immediately in front of his birth place. The yellow building behind the statue Is the birth place. Tip for travelers: This statue is located on Ulitsa Aleutskaya, almost directly across the street from the Primorsky Art Museum, up a fairly steep driveway.

We took a tour in the morning which took us first to a museum and then to this Russian Orthodox Church: 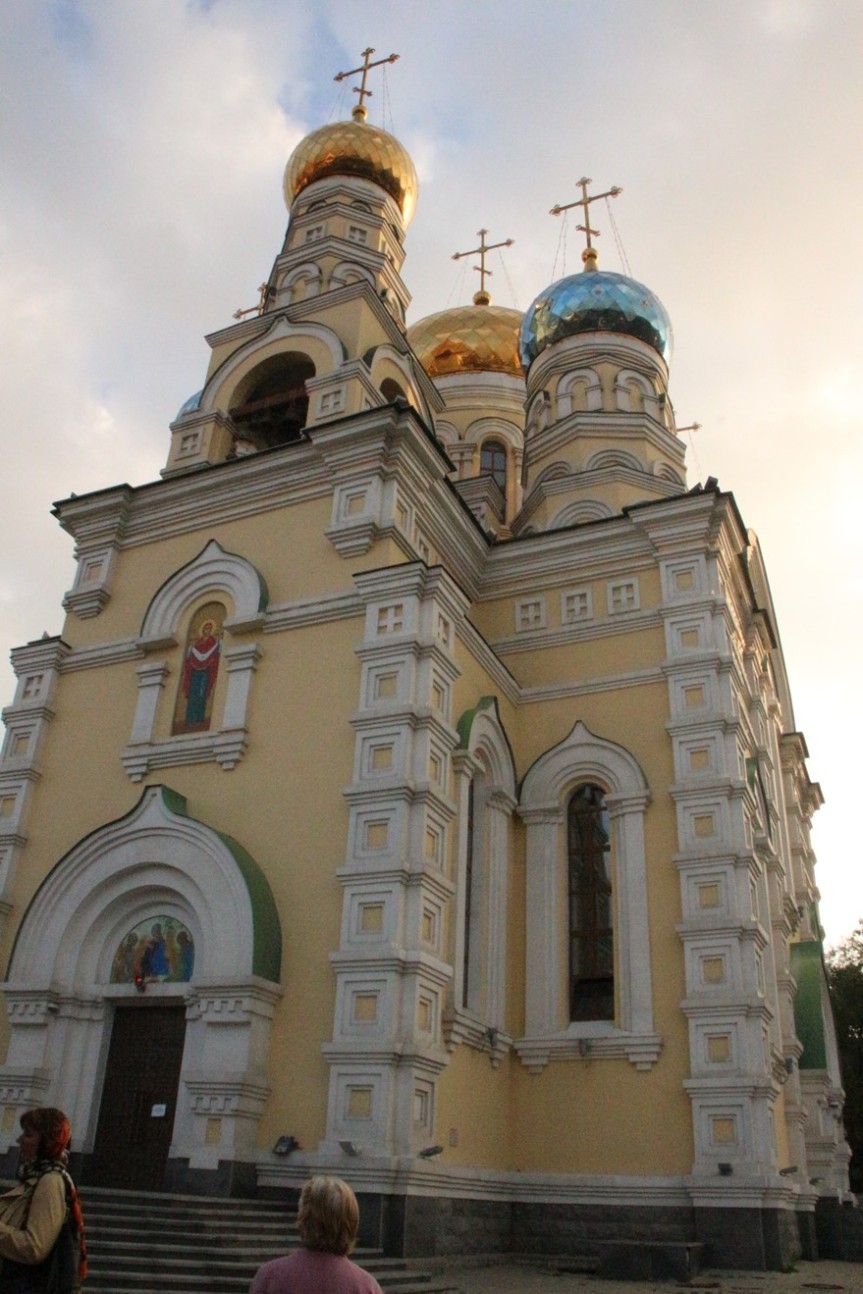 After then visiting the Submarine Museum and the Monument to the Fighters for Soviet Power in the East, we took a restroom break at the local cinema:

Vladivostok recently hosted a meeting of “APEC”, the Asia Pacific Economic Cooperation forum. Heads of state from major countries in Asia and the Pacific region attend. (President Obama passed, but sent Hillary Clinton.) Vladivostok, probably because it’s so far from Moscow has not received much in the way improvements over the years. However, to prepare for the APEC meeting, significant resources were spent on Vladivostok, including building a beautiful new bridge.

Our tour for the morning concluded at “Eagles Nest”, a vantage point atop a hill with great views of the city, the harbor and the new bridge. (Sorry I know we are blocking the view, but our children say they want to see together us in some of the pictures.)

After the tour, we had lunch and then explored Vladivostok on our own. We found the Yul Brynner statue by accident when we were looking for the Arsenev Regional Museum. We asked several people we came across from the cruise who had been to the museum and received fairly negative reactions. We almost didn’t go into the museum, but we are glad we did. They had two floors of interesting exhibits. There were some English markings, but most of the explanations are understandably in Russian. That didn’t really take away from our enjoyment. Holly particularly enjoyed a section on period clothing and another with the stage costumes a famous Russian performer (sorry I don’t remember her name) who had recently passed away. Here’s what the museum looks like from the outside (we missed it the first time we walked by. I think we were looking for a stand-alone building and it’s not.

When we returned to our ship, there was a show by the Vladivostok Folkloric Dancers and Singers that was just wonderful. A great way to end our day in Vladivostok.

Nikita Khrushchev visited the United States in 1959. He met with President Eisenhower and visited among other places, Hollywood, New York and San Francisco. He is said to have compared Vladivostok to San Francisco, probably because they are both natural port cities built on hills. We also noticed that like San Francisco, many of the female residents of Vladivostok dress very stylishly. The city has a cosmopolitan feel to it.

Vladivostok because of its strategic location with access to Asia and the Pacific has, it seems to me, unlimited potential. The current population is only 600,000+. Obviously development in Vladivostok will depend on economic development in the rest of Russia, but my guess is that this formerly closed city, will continue to grow and develop into an important economic center on Russia’s east coast.

You can see the hills and also, some of the Russian Navy ships in the photos below. I took these photos from balcony of my cabin on the Princess Diamond.

As night falls, our ship finally slips its moorings and begins to depart Vladivostok. I took some final photos. 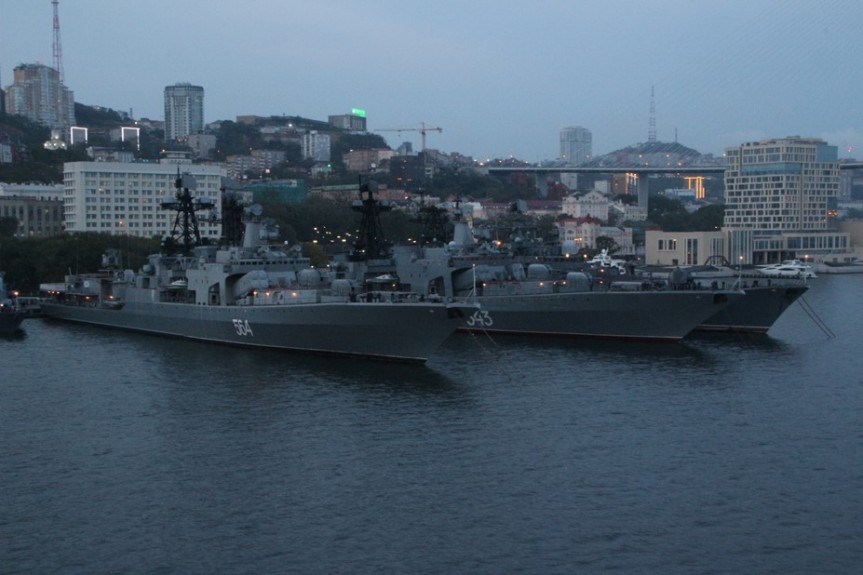 Holly and I are looking forward to seeing more of Russia and taking the Trans-Siberian to Moscow. But that’s about a month in our future. Next stop is Busan, South Korea. Then we stop in two Chinese ports before disembarking our ship and beginning three weeks of travels in China. We’ll be getting back to Russia in about a month. Until then, we say good bye to Mother Russia.