Cairo Day 1 – Our “Raiders of the Lost Ark” Experience

For our time in Cairo, we hired Tamer Mina to be our driver and guide. Tamer had met us at the airport the night we arrived and drove us to our hotel, the Hilton Zamalek. The next morning Tamer picked us up in his car and drove us to Saqqara in the desert on the west side of the Nile River which was the necropolis (cemetery) for Memphis the ancient capital of Egypt. Saqqara was an active burial site for 3,500 years and covering 7 kilometers is Egypt’s largest archaeological site.

Our first stop was the Tomb of Kegemni, the chief justice under the pharaoh Teti. 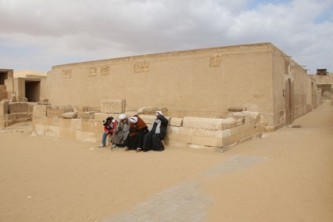 From: http://www.osirisnet.net/mastabas/kagemni/e_kagemni_01.htm – Here’s some information about who Kagemni was: In the first years of the reign of Teti, first king of the 6th Dynasty (c. 2321-2290 B.C.), an official named Kagemni-Memi was appointed to the rank of Chief Justice and Vizier, the highest post in the bureaucracy of Old Kingdom Egypt. Teti had good reason to trust his new vizier because Kagemni was a son-in-law of the king through marriage to “The king’s daughter…” Thanks to his new position and his royal connections, Kagemni was able to organize in the 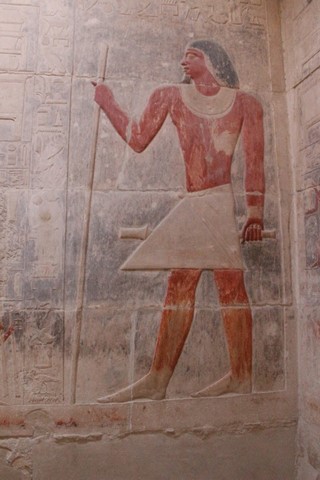 necropolis of Saqqara the construction of a sumptuous tomb for himself, situated close to his king’s pyramid. For it, he would have the best workshops and workers of the country, which explains the extraordinary quality of the decor which decorates the walls of his mastaba.
Kagemni’s portrait on the tomb wall:

Friezes on the wall of Kagemni’s Tomb:

The monument is located to the north of the pyramid of Pharaoh Teti, and to the northeast of the step pyramid of Djoser (3rd Dynasty). It testifies to the power reached by the highest commissioners at the time where the decline of royal authority began.

Pyramid of Teti  (From Lonely Planet Egypt): “The Pyramid of Teti (2345-2323 BC), the first pharaoh of the 6th dynasty, was built in step form and cased in limestone, but today only a modest mound remains. ”

We entered the Pyramid of Teti’s burial chamber by descending a very low passage way. One must bend at the waist to enter. One of these gentlemen will accompany you into the burial chamber and (for a modest tip) will allow you take photographs.

Within the intact burial chamber, Teti’s basal sarcophagus is well preserved, and represents the first example of a sarcophagus with inscriptions, as well as a shower of stars (on the ceiling). Notice some of the blocks of stone making up the vaulted ceiling have settled a little below their neighboring ceiling block. It’s a little disconcerting. 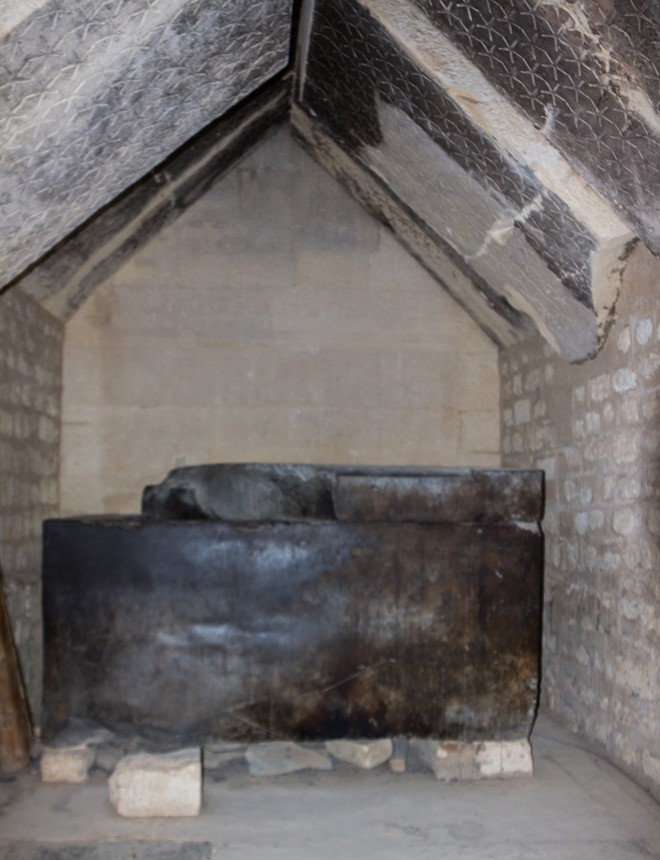 In the interior can be seen portions of the hieroglyphic spells of the Pyramid Texts up close. Later pyramid texts such as these were written onto papyrus scrolls and buried with Egyptians. These scrolls became known as the “book of the dead”. 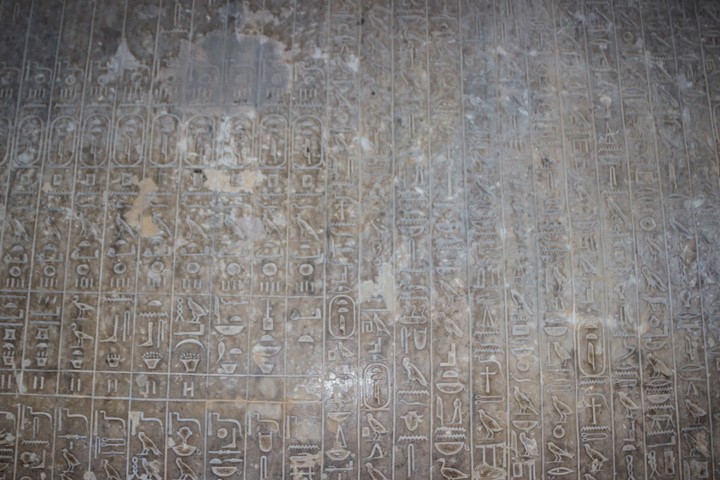 Step Pyramid of Zoser:  From Lonely Planet: “In the year 2650 BC Pharaoh Zoser asked his chief architect Imhotep (later deified) to build him a Step Pyramid. This is the world’s earliest stone monument, and its significance cannot be overstated… Previously, temples were made of perishable materials, while royal tombs were usually underground rooms topped with a mud-brick mastaba (structure in the shape of a bench above tombs that was the basis for later pyramids). However, Imhotep developed the mastaba into a pyramid and built it in hewn stone. From this flowed Egypt’s later architectural achievements.” 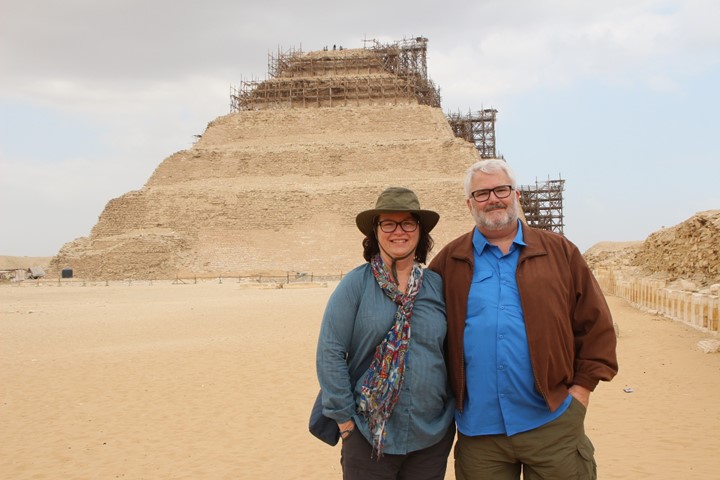 The Step Pyramid is surrounded by a vast funerary complex, including the Hypostyle Hall. The 40 pillars in the corridor are “bundle columns”, ribbed to resemble a bundle of palm or papyrus stems.

The Step Pyramid’s funerary complex includes the Great South Court with a section of wall featuring a frieze of cobras. 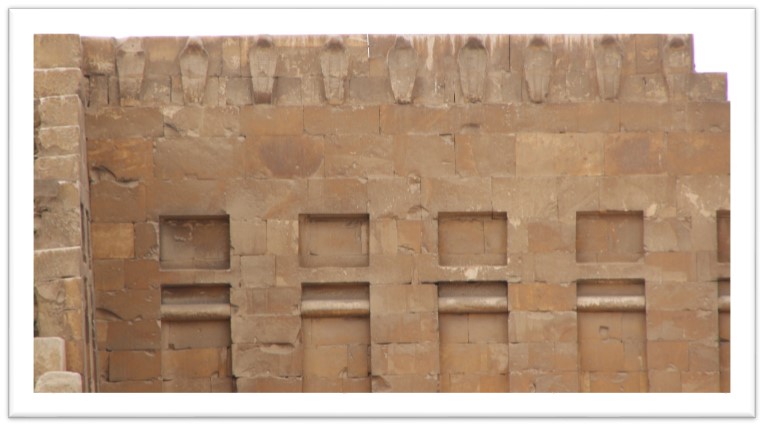 About 10 kilometers south of Saqqara, also on the West Side of the Nile is Dashur. About 3.5 km long, this area once had 11 pyramids. There are three pyramids that can still be seen, two from the old kingdom and one from much later.

The two old kingdom pyramids at Dashur are the “Bent Pyramid” and the “Red Pyramid”. These pyramids were built for the Pharaoh Sneferu and are the first true pyramids erected in Egypt. From Wikipedia: https://en.wikipedia.org/wiki/Sneferu “Sneferu, was the founder of the 4th dynasty during the Old Kingdom. The Oxford History of Ancient Egypt suggesting a reign from around 2613 BC to 2589 BC.[6] He built at least three pyramids that survive to this day and introduced major innovations in the design and construction of pyramids in Ancient Egypt. His son Khufu is well known under his Hellenized name Khêops or Cheops – took his father’s innovations in pyramid building to the next level by
building the Great Pyramid at Giza.”

The first of Sneferu’s massive undertakings is the Pyramid at Meidum (which we did not see). There is some debate among scholars as to Sneferu’s claim to the Meidum pyramid, and many credit its origin to King Huni. Nonetheless, the pyramid is a remarkable example of the progression of technology and ideology surrounding the king’s burial site.

The immense stone structure serves as physical testimony to the transition from the stepped pyramid structure to that of a “true” pyramid structure. Archaeological investigations of the pyramid show that it was first conceived as a seven-stepped structure, built in a similar manner to the Djoser complex at Saqqara. Modifications later were made to add another platform, and at an even later stage limestone facing was added to create the smooth, angled finish characteristic of a “true” pyramid.
Complete with a descending northern passage, two underground chambers, and a burial vault, the pyramid mainly follows the conventions of previous tombs in most aspects other than one: instead of being situated underneath the colossal structure, the burial chamber is built directly within the main body albeit very near ground level.
The Bent Pyramid – Sneferu’s 2nd pyramid and 1st attempt at a true pyramid:

From the Lonely Planet: Egypt – “Trying to create a true, smoot-sided pyramid, Sneferu’s architects began with the same steep angle and inward-learning courses of stone they used to create step pyramids. When this began to show signs of stress and instability around halfway up its eventual 105 meter height, they had to reduce the angle from 54 degrees to 43 degrees to and begin to lay the stones in horizontal layers. This explains why the structure has the unusual shape that gives it its name.” 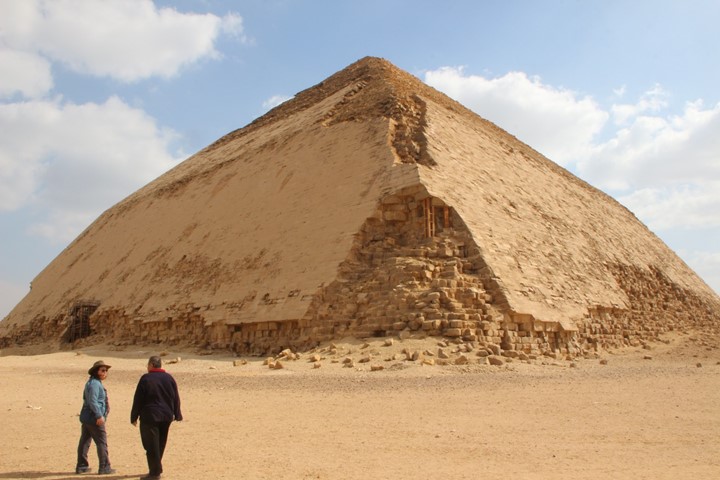 The Red Pyramid, also called the North Pyramid, is the largest of the three major pyramids located at the Dahshur necropolis. Named for the rusty reddish hue of its red limestone stones, it is also the third largest Egyptian pyramid, after those of Khufu and Khafra at Giza. It is also believed to be Egypt’s first successful attempt at constructing a “true” smooth-sided pyramid. The Red Pyramid was the third pyramid built by Sneferu, and is located approximately one kilometer to the north of the Bent Pyramid. It is built at the same shallow 43 degree angle as the upper section of the Bent Pyramid, which gives it a noticeably squat appearance compared to other Egyptian pyramids of comparable scale. Construction is believed to have begun during the thirtieth year of Sneferu’s reign. Egyptologists disagree on the length of time it took to construct. Some suggest it took 17 years to complete, others say 10 years and 7 months.

The Red Pyramid was not always red. It used to be cased with white Tura limestone, but only a few of these stones now remain at the pyramid’s base, at the corner. During the Middle Ages much of the white Tura limestone was taken for buildings in Cairo, revealing the red limestone beneath.

We entered the Red Pyramid by climbing up the exterior to the entrance and then 142 steps down a 63 meter long passage way. 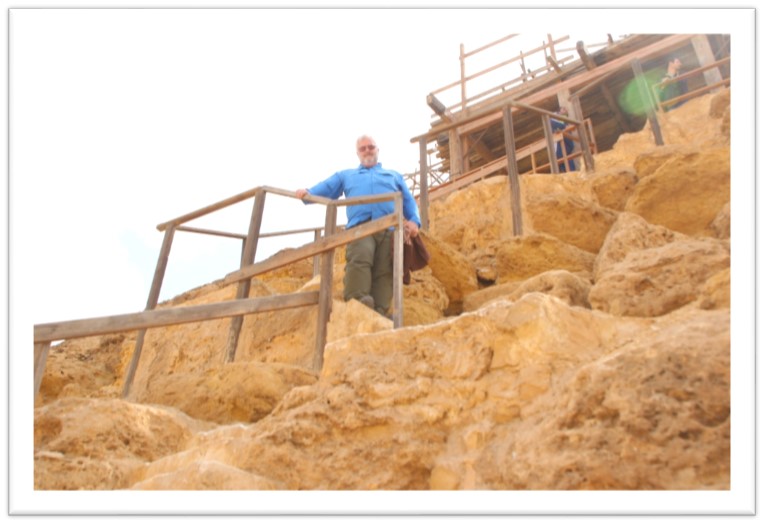 When entering the Red Pyramid, we descended a long, low corridor. 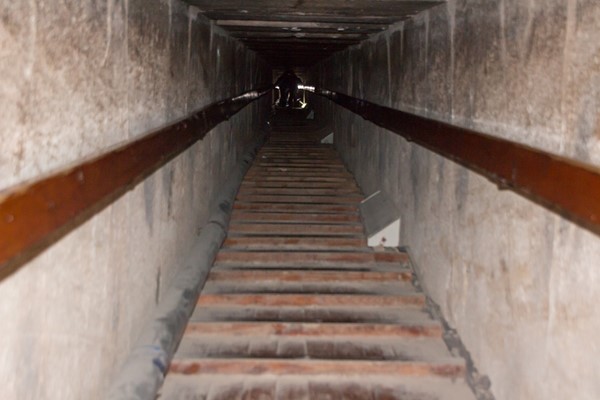 The burial chamber inside the Red Pyramid is very plain, but has tall vaulted ceilings. The ancient Egyptians made a vaulted ceiling that supported the weight of the pyramid, by placing stones at each layer a little closer. To allow visitors to get to the final chamber, they have built this wooden staircase. It is amazing that 5,500 years ago, people could build large rooms inside massive pyramids. 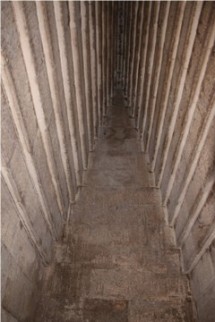 The Black Pyramid – The Black Pyramid was built by King Amenemhat III during the Middle Kingdom of Egypt (2055-1650 BC). It is one of the five remaining pyramids of the original eleven pyramids at Dahshur in Egypt. Originally named Amenemhet is Mighty, the pyramid earned the name “Black Pyramid” for its dark, decaying appearance as a rubble mound. The Black pyramid was the first to house both the deceased pharaoh and his queens.  The pyramid was originally about 75 meters tall with a base 105 meters long and an incline of 57°. Typical for pyramids of the Middle Kingdom, the Black Pyramid, although encased in limestone, is made of mud brick and clay instead of stone.  (That’s why it’s in such bad shape today.) 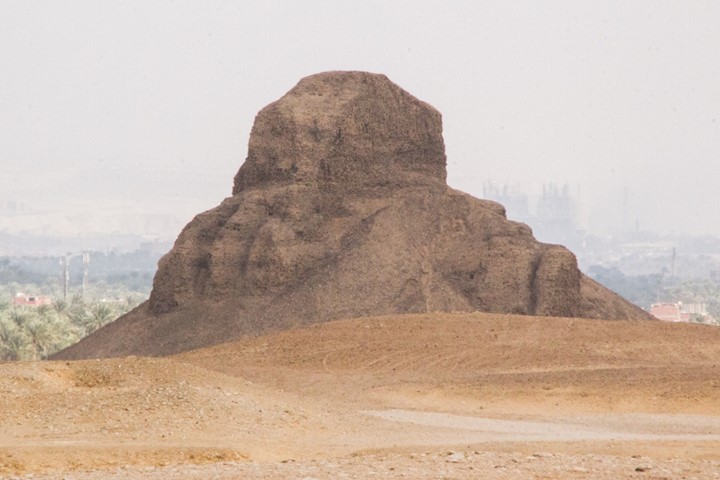 Memphis:  Memphis became the capital of Ancient Egypt for over eight consecutive dynasties during the Old Kingdom. The city reached a peak of prestige under the 6th dynasty as a center for the worship of Ptah, the god of creation and artworks. The alabaster sphinx that guards the Temple of Ptah serves as a memorial of the city’s former power and prestige.

The only remaining evidence of Memphis is an open-air museum, built around a magnificent fallen colossal limestone statue of Ramses II. 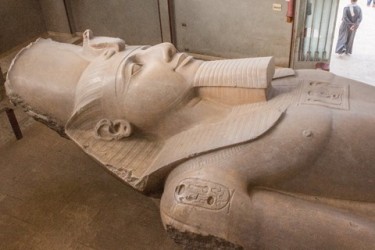 This alabaster sphinx is the other major attraction at the Memphis Open Air Museum. 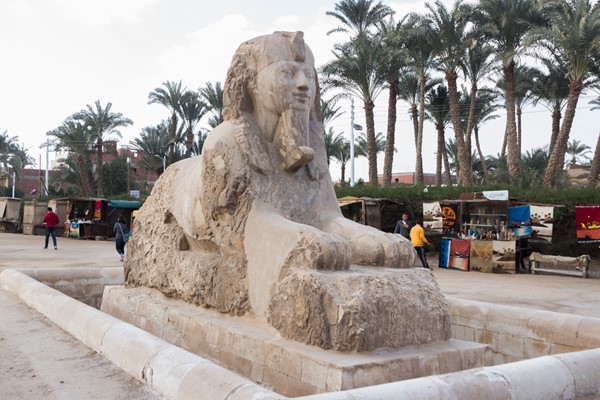 Finally, we went to dinner with Tamer. We had a very nice dinner which only cost 140 Egyptian pounds or $17.95 or $5.98 per person for a nice multi-course dinner. Egypt is very affordable, hotels, food, etc. are not expensive. Everywhere we went it was obvious that tourism is way down. It was nice for us, because much of the time it felt like we had the museums, temples, pyramids and other attractions to ourselves. Because of the bad publicity about Egypt, tourists are still staying away, but they shouldn’t. We felt completely safe the entire time we were in Egypt and the people really want tourists and their dollars. If you would like to visit Egypt, don’t wait. GO!!