The second day of our Moroccan road trip we continued toward our rendezvous with camels and New Year’s Eve on the sand dunes.

After finishing our previous day at Ait Ben Haddou (see my previous blog post) we spent the night at the hotel Sawadi near the town of Ouarzazate. (Website: http://www.sawadi.ma/en/) This hotel is run by a French couple. (All the nicest hotels and riads we stayed at in Morocco were run by French owner/operators.) If you are needing a hotel in this area, I highly recommend it. We arrived late and it was dark so we couldn’t see much of the place. Our rooms were nice and we had a nice dinner in their restaurant. In the morning we were able to see more of the hotel and its grounds. We were impressed. There is a pool and places for kids to play.

Our first stop was another Kasbah, Kasbah Amradil near Skoura. 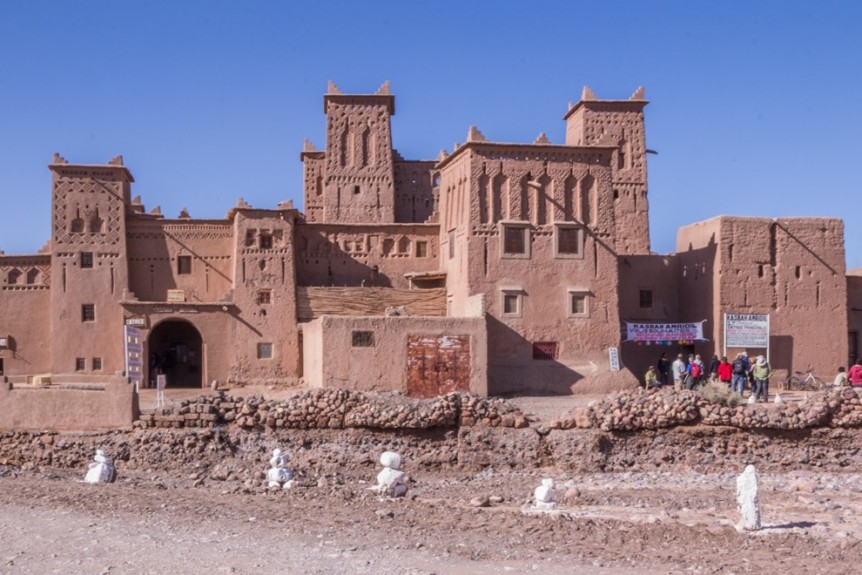 Kasbah Amerhidil is one of the largest Kasbahs in Morocco and has been partially restored.

We hired a local guide at the entrance to walk us through the Kasbah – and of course we took photos. 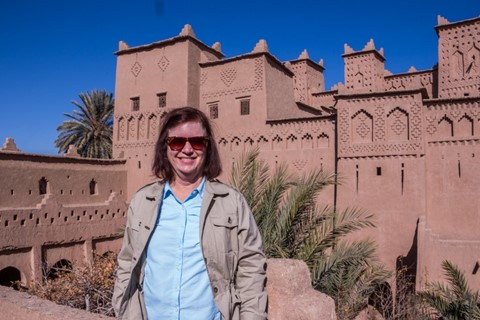 We then continued our trip through Morocco’s Rose Valley – known for production of Moroccan roses – towards the Dades Gorge.

On the way we passed Tamnalt Hills, with rock formations the Moroccans say look like a monkey’s feet. 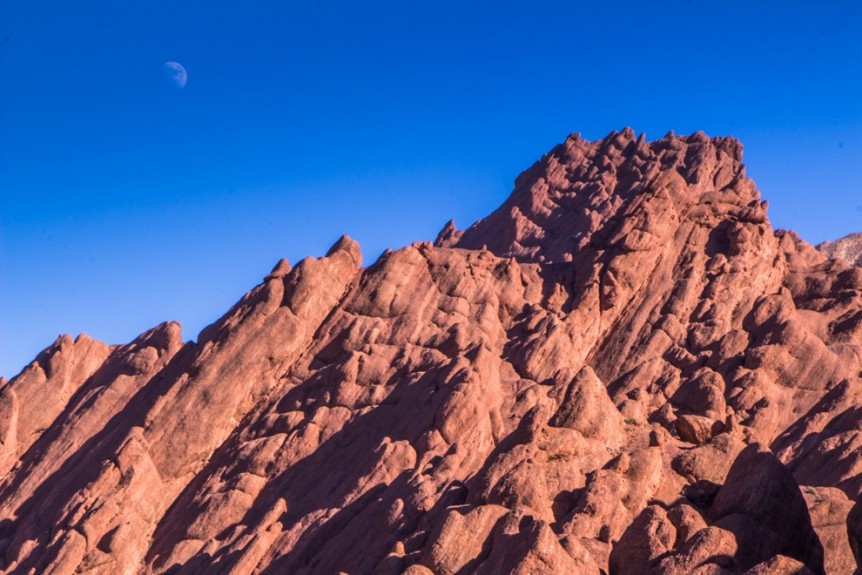 Here are Natalie and our guide Mohammed.

This is a look back on the road through the Dades Gorge:

Some scenery on the trip through Dades Gorge, a photo of me and one with Natalie and Rebecca. We continued toward our destination for the night – Todra Gorge. 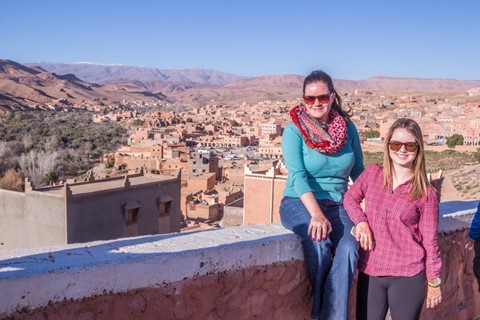 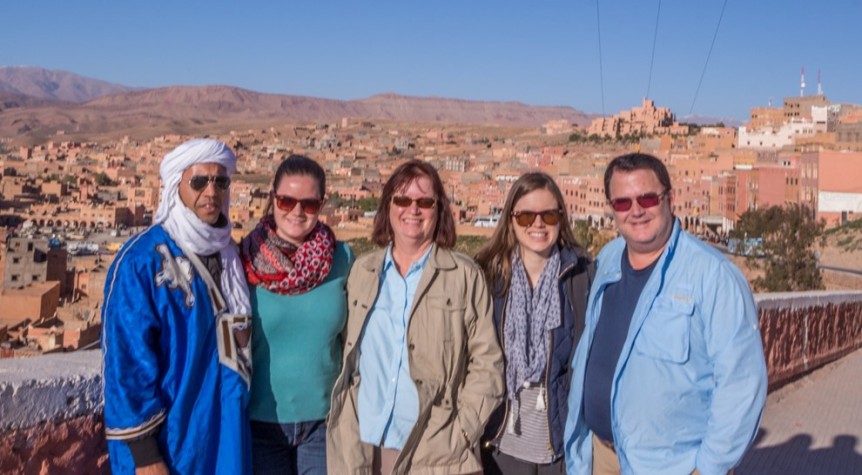 The next morning we took a walk through Todra Gorge. The walls of the Gorge are 300 meters tall and at their narrowest, only 20 meters apart.

The girls walking across the river that cuts through Todra Gorge. After our morning Gorge walk, we stopped and purchased some Berber Carpets at a small shop down an alley and up some stairs. It was very charming. They served us tea, then they had two older women demonstrate the fine art of carpet weaving. Then we went through their merchandise. I bought two carpets which we arranged to ship home via DHL in Fes. 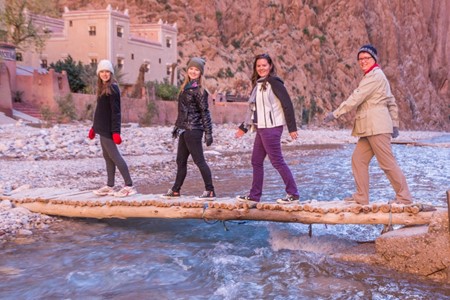 In Erfoud, Mohammed suggested we stop and buy head scarves for our Camel Trek. Natalie and Holly model their purchases.

Mohammed is no slouch in the head scarf department:

To begin our camel adventure, we passed under this camel gate leading to a hotel. The camel concession and sand dunes are in the rear of the hotel. Here’s Natalie with one of the gentlemen assisting in preparing us for our camel trek: 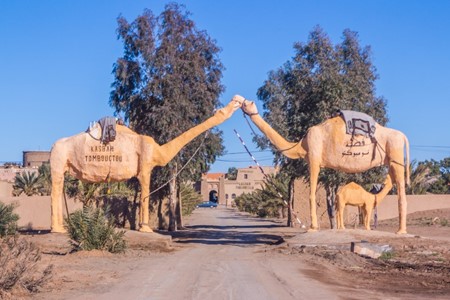 The dunes really are this color. Amazing!

We were loaded up on our camels for the hour and a half trek to our camp for the night. This gentleman led our camel train of 5, while our guide Mohammed took my camera and took many really good photos of us while we had our Lawrence of Arabia moment.

It was late afternoon and we cast really long shadow as our camels walked along the crest of the dunes. 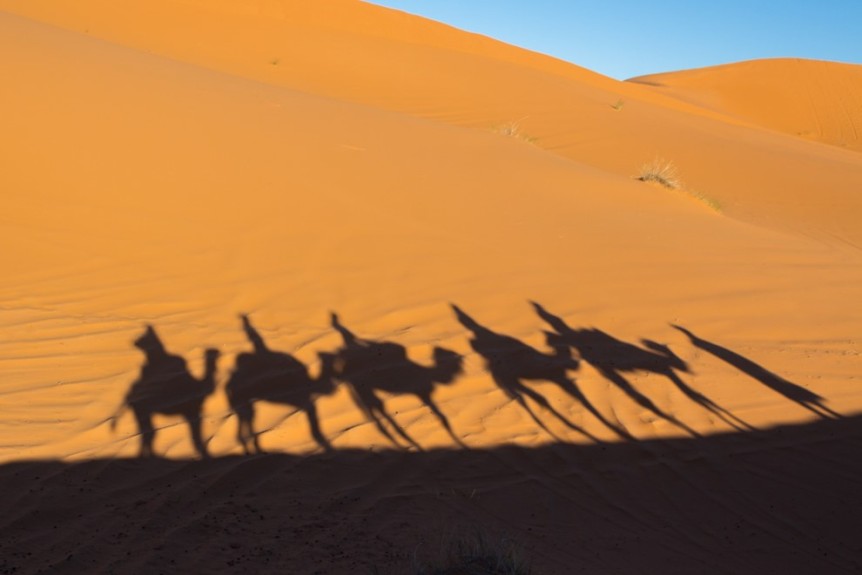 Eventually we arrived at our camp, where we were joined by a group of Japanese who are in Morocco as part of Japan’s version of the Peace Corp.

The girls checked out our tent and the beds and the rest of the camp, 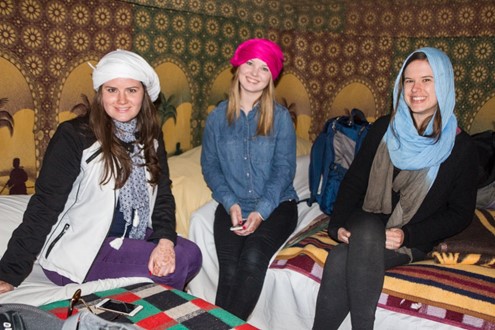 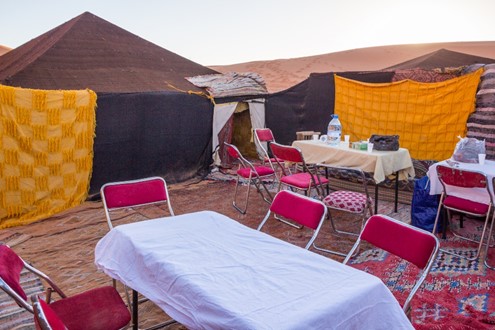 Then we climbed to the top of the nearest dune to take pictures and watch the sun set. 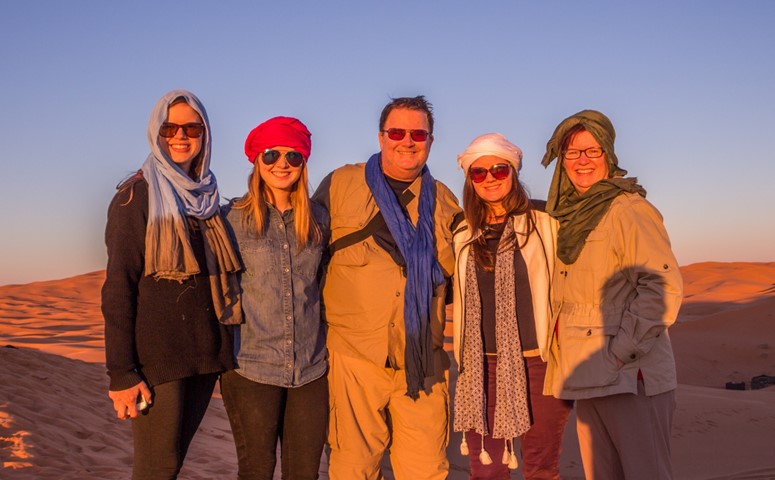 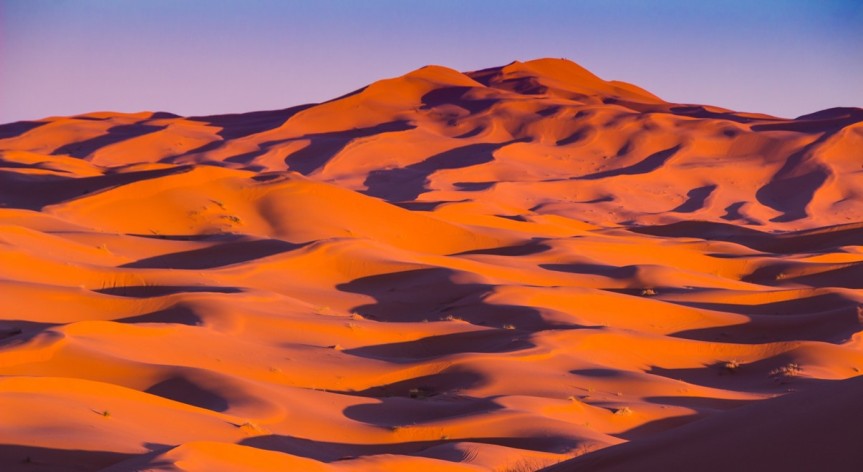 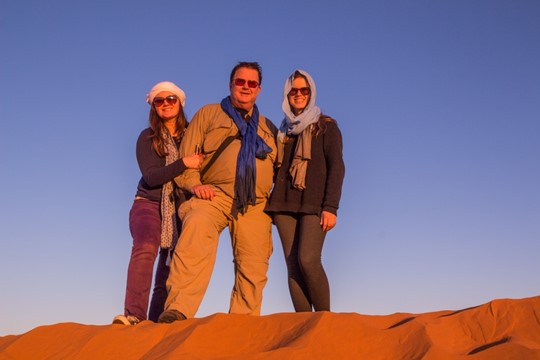 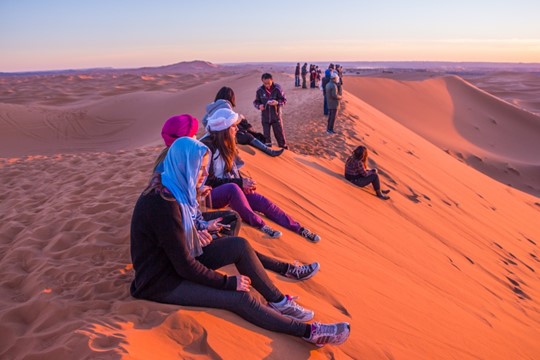 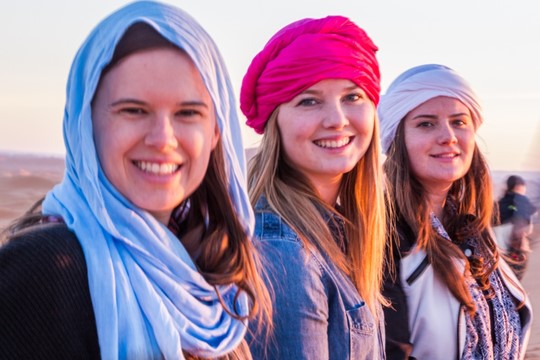 We feasted on a sumptuous New Year’s eve dinner, including a Moroccan Tangine dish.

After dinner along with the Japanese contingent, we were treated to a campfire with music and dancing. 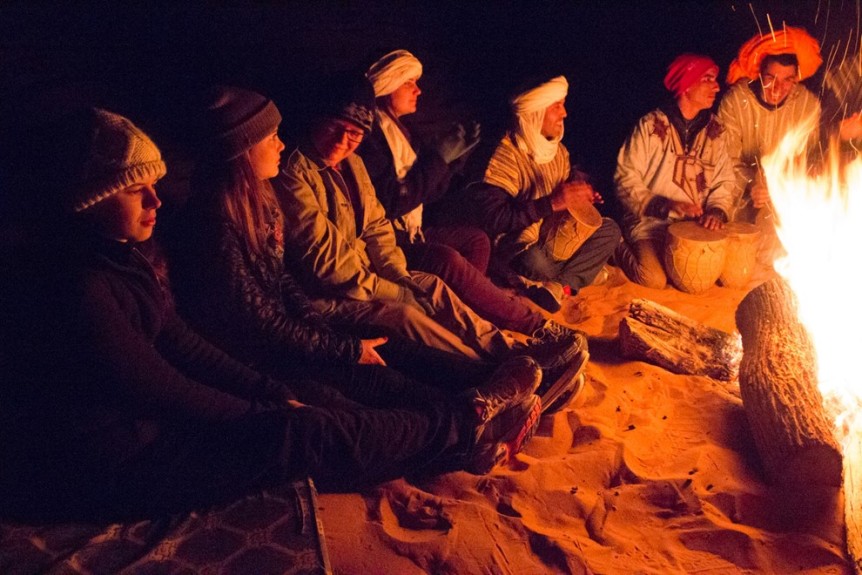 The only negative of the experience was how bitterly cold the desert got that night. We all were freezing and had to tuck our heads under the covers to keep reasonably warm.

The next morning we loaded up on our camels and headed back to hotel where we had a nice breakfast. Mohammed pulled a few strings and got us each a hotel room to take hot showers before continuing on our trip.