Marrakesh – Part 1 – You are welcome!

Having collected all of our daughters in Casablanca, we boarded a morning train to Marrakesh on Christmas day. The countryside in Morocco in December is green and reminds me of California. We passed many towns, villages and farms. I took this photo of a village we passed from my window on the train.

I usually like to spend my time on trains looking out the window and working on my photographs for the blog.

Morocco is a mix of old and new. Everywhere we went we saw a lot of construction. New buildings, even whole new towns and cities going up. You also still see the traditional side of Morocco. Here’s another photo I took from the train. We saw people using donkeys to pull carts and also just riding the donkey itself, usually also loading the donkey with whatever they need to haul.

When we arrived in Marrakesh, we loaded ourselves and our baggage into one taxi. That meant three daughters and Holly in the back seat and the creative use of bungee cords to hold our luggage in trunk. There are typically two types of taxis available, gran taxis – which are basically full size cars and petit taxis which are very small subcompacts (usually with roof racks for luggage). Petit taxis can only take 3-4 passengers and since we were 5, we frequently took two petit taxis. Often by bargaining with one driver who then coordinates with the second driver. We quickly learned that taxis do not have meters and prices must be NEGOTIATED up front. Bargaining is part of the fabric of Morocco and we found that we had to bargain the amount of the fare before entering a taxi, otherwise you WILL be taken for a ride (both literally and figuratively).

Holly had booked us rooms at the Riad Alboraq (http://www.riad-alboraq.com/en/ ) run by a French woman named Michelle and a very friendly and warm staff. Our favorite staff member was Mohammed, who was always very helpful and quick to bring us a pot of Moroccan tea. We arrived on Christmas and ate dinner in their dining room. The staff even found some Christmas ornaments to decorate our table. Here we enjoying breakfast the next morning. 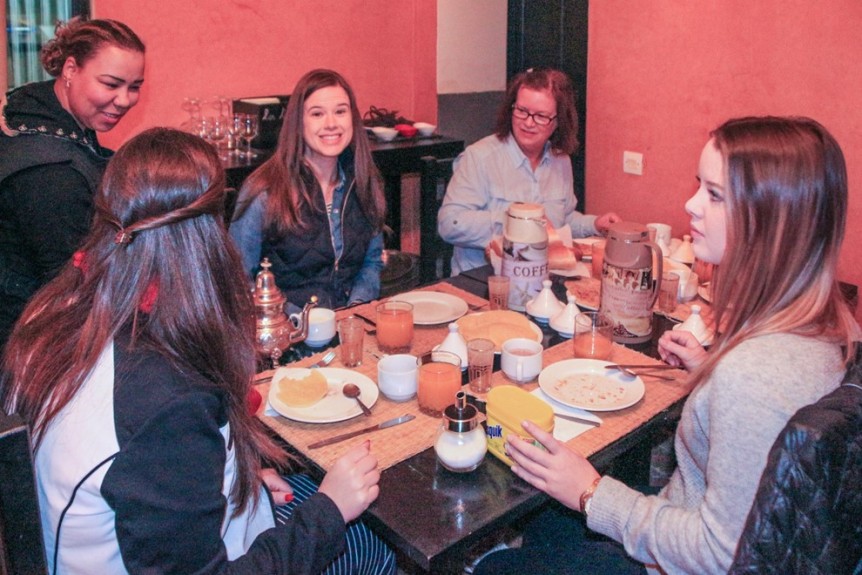 Djemaa el-Fna is the open square at the center of Marrakesh’s Medina. In the background is the Minaret of the Koutoubia Mosque.

We took these photos of the main square from the terrace of one of the several restaurants on the south side of the square.

Here are a couple of photos of Djemaa el-Fna square from street level. 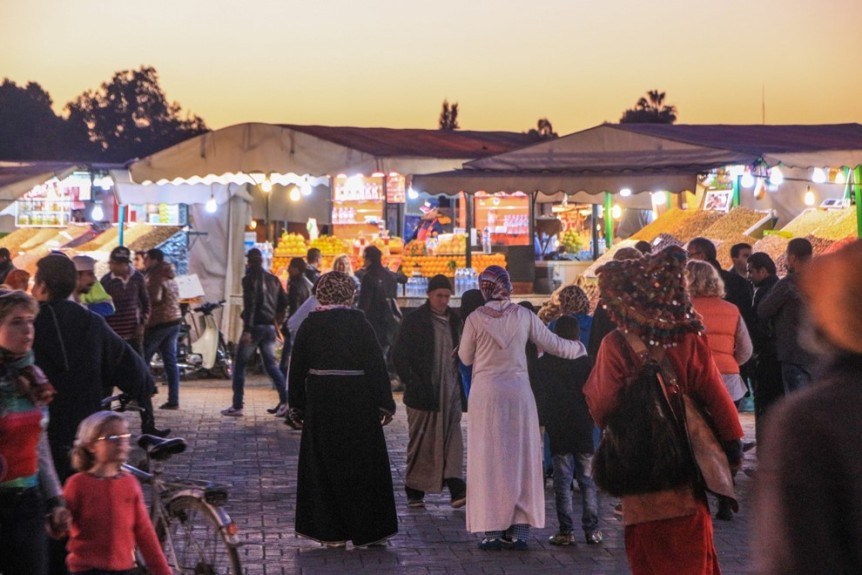 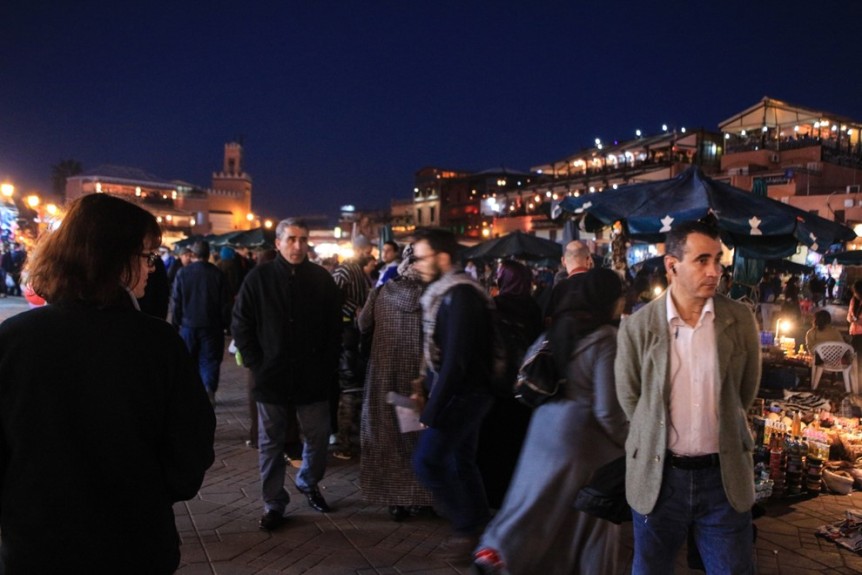 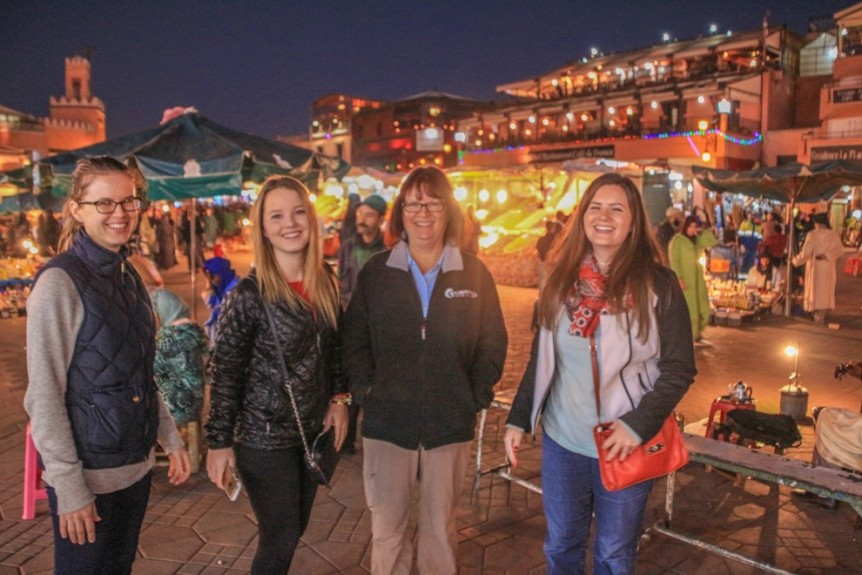 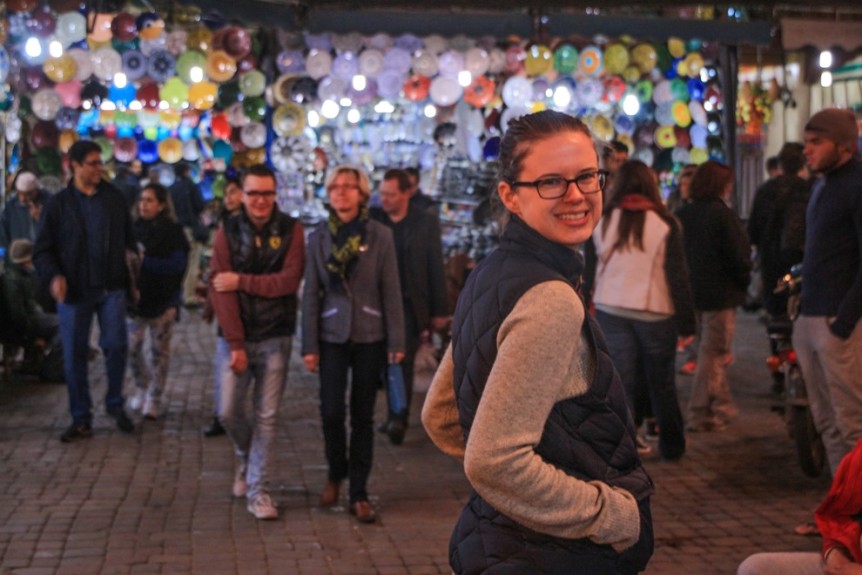 Ali ben Youssef Medersa is a well preserved 16th century Koranic school. As many as 900 students from Muslim countries around the world once studied here.

This is a view looking up through one of the sky lights notice the beautifully carved cedar wood.

This is the central courtyard of Ali ben Youssef Medersa. Arranged around the courtyard are the students former sleeping quarters.

We couldn’t resist taking pictures in the ornate doorways with their intricate “gibs” (stucco plasterwork and “zellij” (mosaic). 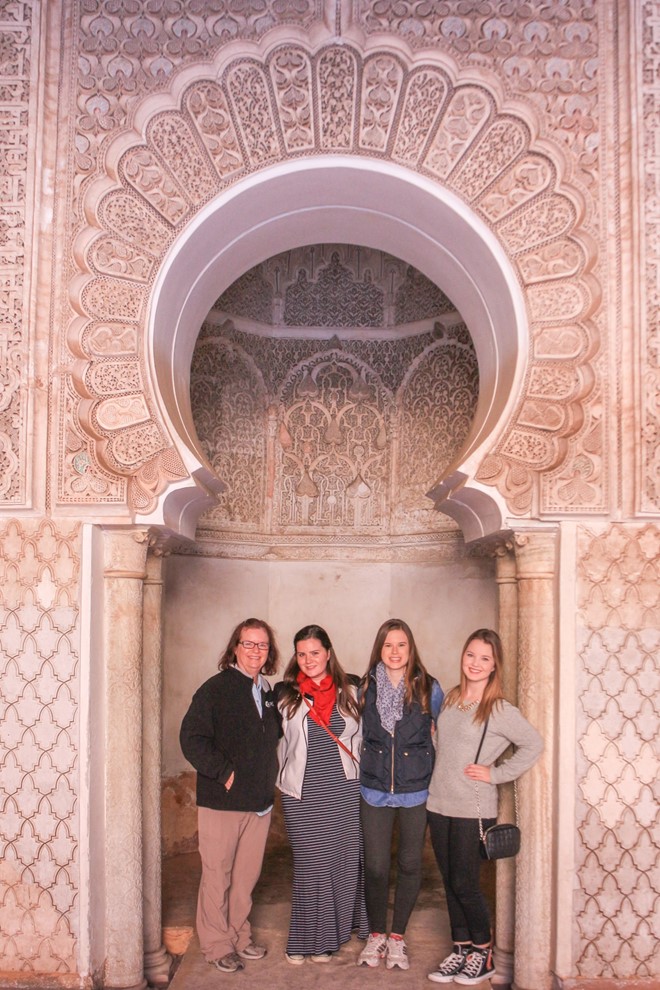 The girls look out into the central courtyard from one of the windows of the student’s rooms. Notice the Arabic script just above the top of the window.

We spent more time shopping in the Souks than at any other activity in Marrakesh and indeed throughout Morocco. The Souk is a vast labyrinth of narrow streets lined cheek by jowl with shops offering hand-crafted items, food, knock-off merchandise and what-not.

Some of the more colorful stalls in the souk were the sellers of spices and this seller of beans.

From Fodor’s Morocco: “This 16th century palace was once a playground for Saadian princes and visiting diplomats – a mammoth showpiece for opulent entertaining. Today it’s a romantic set of sandstone ruins, policed by nesting storks. Sultan Ahmed el-Mansour’s lavish creation was ransacked by Moulay Ismail in the 17th century to help him complete his own palace at Meknes. But it’s not hard to see why the palace, whose name translates as “The Marvel,” was once among the world’s most impressive monuments. A huge swimming pool in the center is flanked by four others, along with four sunken orange orchards.” 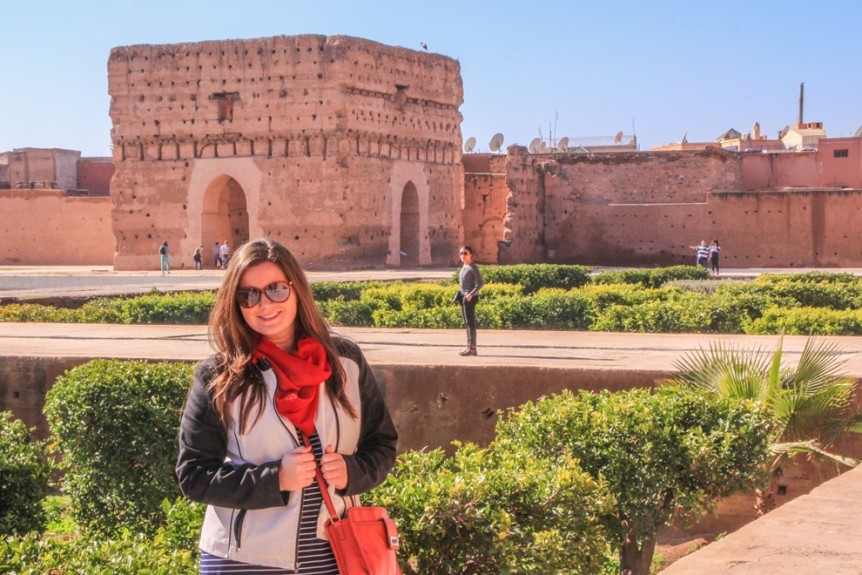 A view from the palace walls:

Holly on the palace walls: 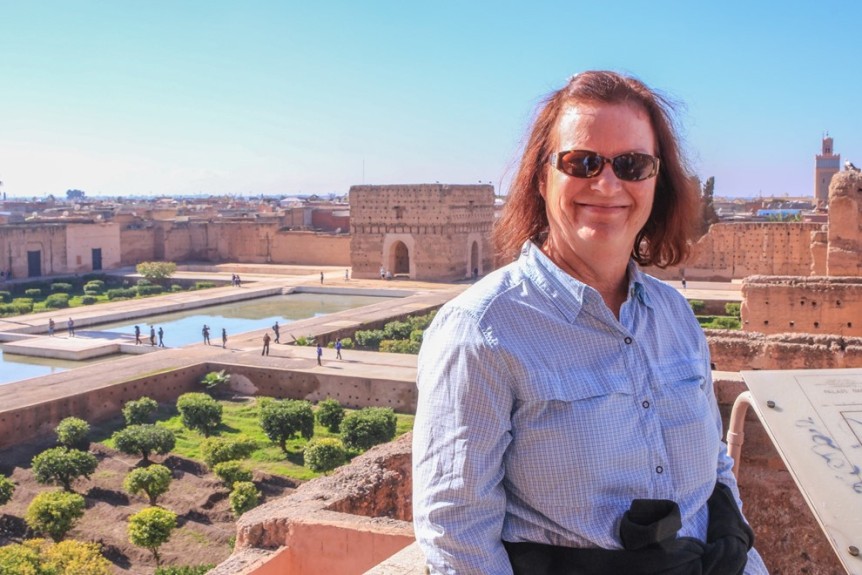 Back in the main square (Djemaa el-Fna) we decided to eat at one of the open air restaurants. This is not a relaxing experience. Forget about calmly choosing a restaurant. The moment you come over by the restaurants all grouped together, you are immediately beset by competing restaurant employees directing you to a table at their establishment. Once you sit down, the three ring circus continues as you will be sitting packed together with other diners and you will be jostled as people move in and out behind you.

To make matters worse, we got this hyperactive waiter who was much more irritating than entertaining.

Here’s the food we got. It was OK, but not really worth the price. 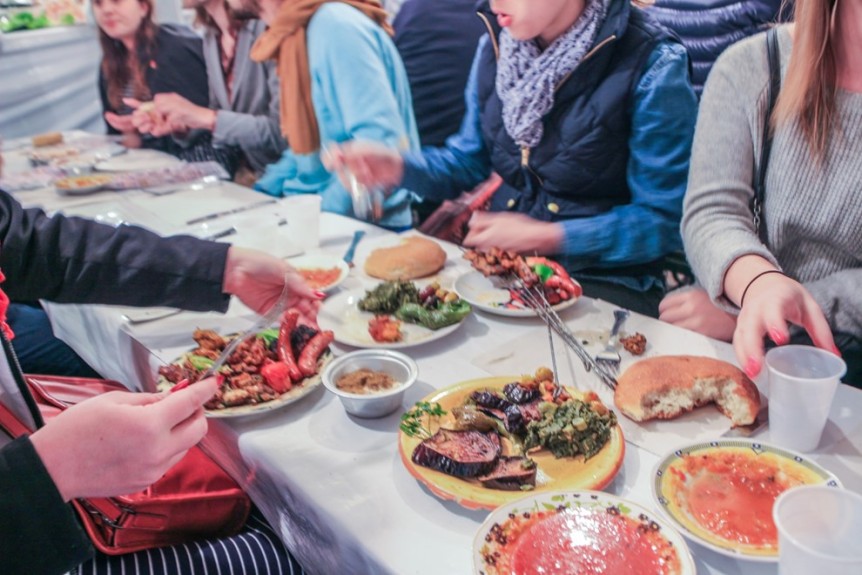 I suggest finding a nice quiet restaurant where the food and ambiance will be much better. 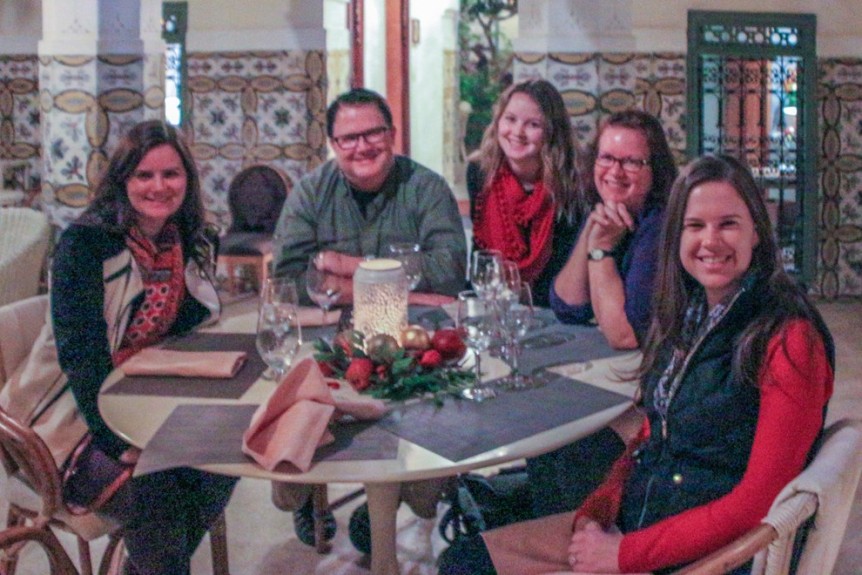 Coming up Part 2 – More photos from Marrakesh and a day trip to Essaouira.