Prague – We Czech in on this ancient capital.

When we were planning this trip, very early on Holly made it clear that she wanted to visit Prague. I could pick almost any cities/countries to visit – but Prague needed to be on the list. Prague wasn’t really on my radar screen, but I’m glad we went. The history of Prague goes back over 100 years and although the Nazis took over, followed by the Soviets, the city wasn’t destroyed by the conflagration of World War II. With the old buildings and the winding streets, I felt at times like I was in a medieval city. I said to Holly at one point that Prague reminded me of Venice, without the water.

Prague also reminded me of Budapest. Like Budapest, there is a river running through Prague. Like Budapest, on the bank of the river (the Vltava River in Prague), Prague is crowned by a castle complex atop a hill that overlooks the city across the river. And as with Budapest, Prague has many beautiful bridges crossing the river, including the historic Charles Bridge.

We spent about a day and a half touring the churches, museums and sights of Prague Castle. We entered into the first courtyard through this gate of battling titans. Notice the pair of guards beneath the statues.

There is a changing of the guards every hour, but at noon, there is a more elaborate guard changing ceremony, with one platoon of guards marching in to the sounds of a brass band (see the 2nd story windows on the right), relieving another platoon that marches out at the end of the ceremony.

Description of the Treasury from the Czech website: “The largest church treasury in the Czech Republic and one of the most extensive in Europe, the Treasury of St. Vitus Cathedral traces its beginnings back to the early Middle Ages. One of the oldest items in its inventory is a relic of the arm of Saint Vitus, acquired by Prince Wenceslas in 929 from Henry I, Duke of Saxony… During the second half of the 14th century, it was significantly enlarged through acquisitions of relics of saints and martyrs, donated to the church by King Charles IV. Accomplished goldsmiths and silversmiths fashioned precious vessels in which the holy remains were kept, allowing their manipulation during liturgical celebrations and important dynastic occasions.” This is a picture of the interior the St. Vitus Treasury from the Czech website. 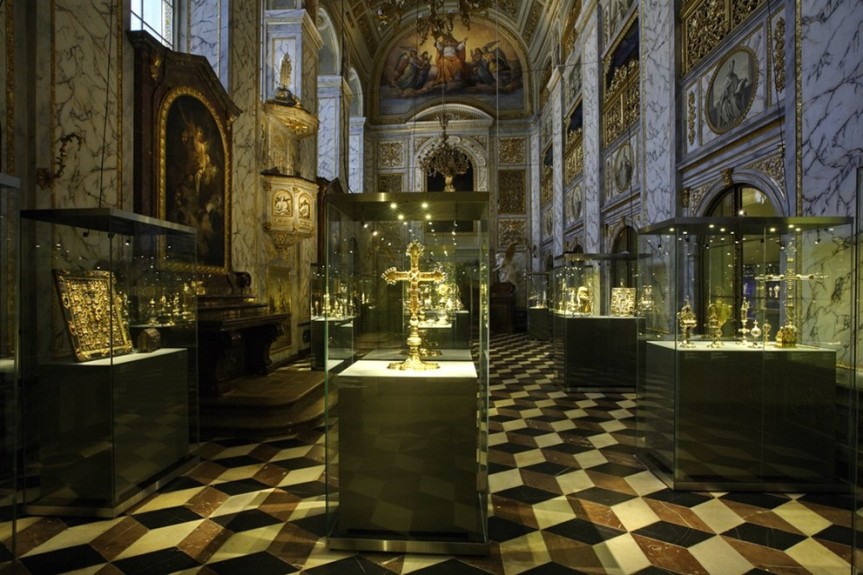 Entering the 3rd Courtyard, we came to the St. Vitus Cathedral. This gothic cathedral is the largest and most important church in the Czech Republic.

Above the main doors is this frieze of the crucifixion of Christ, with soldiers gambling for Christ’s clothing on the lower left and Christ’s body being taken from the cross on the lower right. 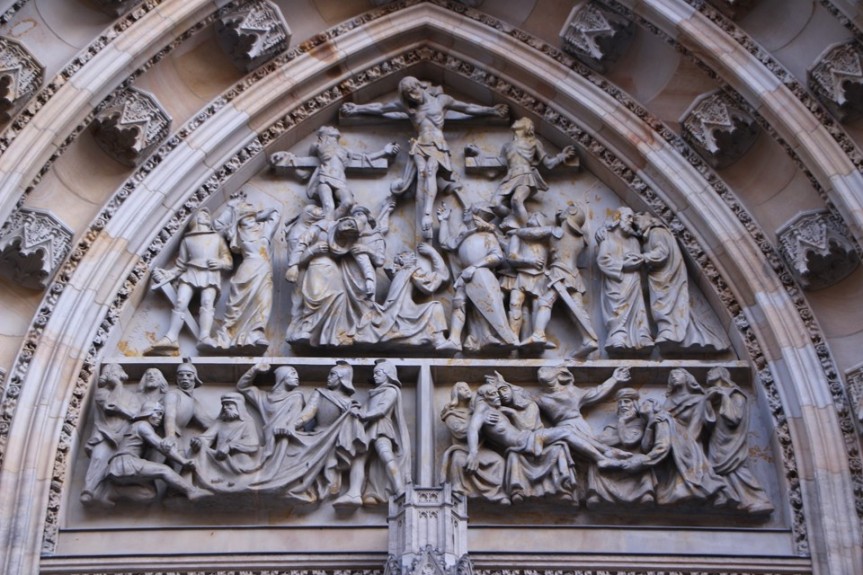 On the side of St. Vitus’s Cathedral was this nativity scene made of straw.

This view of the rear of the cathedral from St. George’s Square shows the flying buttresses.

Behind St. Vitus’s Cathedral is another church is the Basilica of St. George, the best preserved Romanesque basilica in the Czech Republic. The basilica dates to the 10th century when it was established by Vratislav I, the father of St. Wenceslas.

The Golden Lane: Built into the walls of the Castles are these tiny shops and dwellings that originally were for the castle’s guard.

Here’s Holly at the entrance to Prague Castle, looking north. 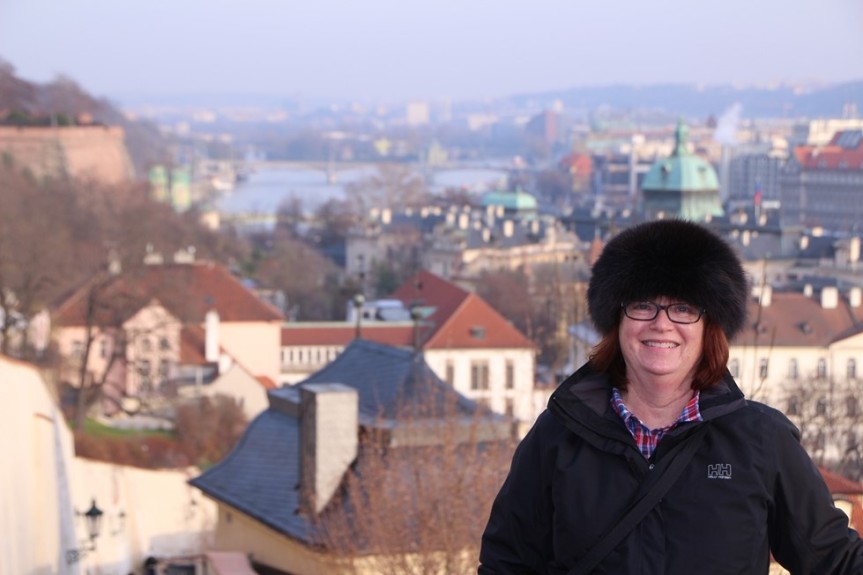 This is another view of Prague taken at sunset from the entrance to Prague Castle.

A view of the bridges over the Vltava River at sunset taken from the entrance to Prague Castle.

Another view of Charles Bridge. This bridge was completed in 1390 and carried wheeled traffic through World War II, now it’s a pedestrian only bridge with pairs of statues of saints along its length.

By the time we arrived at Charles it was dark. Here’s a photo of the Bridge Towers on the eastern end of Charles Bridge; Prague Castle and St. Vitus’s Cathedral are visible in the upper right quadrant of the picture.

One of the unique foods we saw for sale in the Czech Christmas markets was Trdelnik. As described by Wikipedia: “It is made from rolled dough that is wrapped around a stick, then grilled and topped with sugar and walnut mix. Nowadays, trdelník is again gaining popularity as a sweet pastry in Slovakia and the Czech Republic and is very popular among tourists.” Our trdelnik was just OK. I’d recommend trying it, but we didn’t rush out to buy a second one. 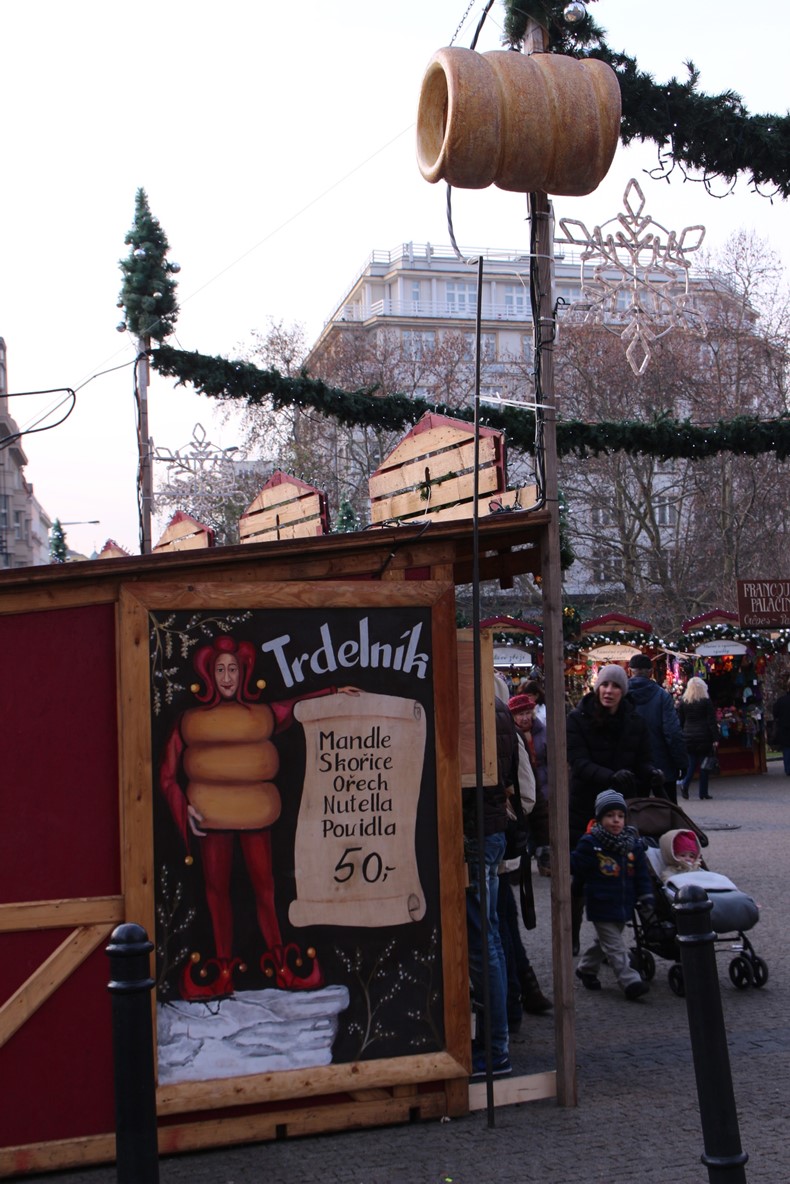 Another view of Prague’s Old Town Square with a view of the Church of St. James:

New Town (Nové město): Here’s Holly on Wenceslas Square with the National Museum in the middle of the background.

This statue of St. Wenceslas, (Good King Wenceslas of Christmas carol fame) flanked by the other patron saints of Bohemia stands in front of the National Museum.

Continuing our cultural tour of Europe, we went to a performance of La Traviata at the State Opera (photo below), a short walk from the National Museum.

We had our own box at the opera. That was nice. Because we were in our own box, we could kick off our shoes, take off our coats and get really comfortable.

The State Opera in Prague was very nice. Perhaps not as big or elaborate as the Bolshoi Theatre in Moscow or the Mariinsky Theatre in St. Petersburg, it was very tasteful and comfortable.

Here’s a picture I took of the orchestra pit, with my niece Merritt in mind. 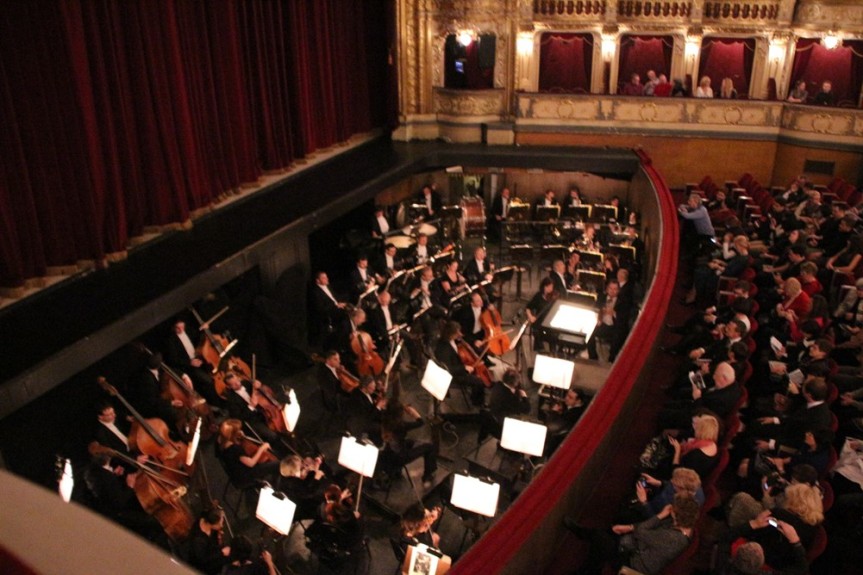 The performance of La Traviata was good. The singing and the music were beautiful. I was left a little cold by the costumes and scenery which didn’t seem very interesting or imaginative to me. I also thought that the gratuitous nudity was added just to be daring, and added nothing to the experience. Photography is not allowed during the performance, so I took this photo from the Opera’s website.

We left Prague on a morning train to Berlin. As we rode the train, we followed along the river and saw many beautiful little villages. Near Usti nad Labem in the Czech Republic, I took this photo which I quite like. 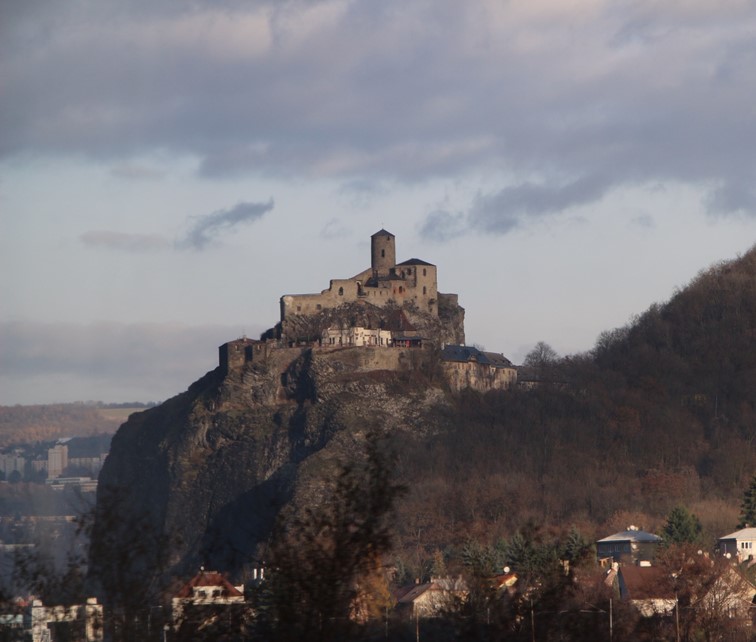