A guest blog by Holly Melton:

Our sweet ride from Moscow to St. Petersburg (and back): 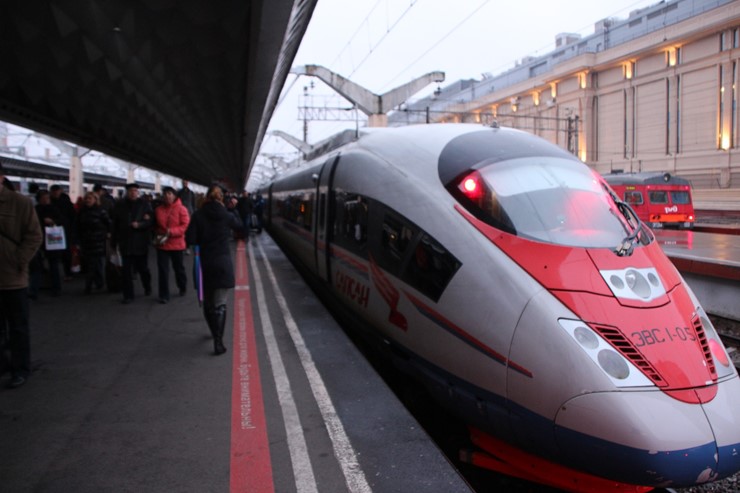 Mark and I are becoming experienced train riders on this trip. On this trip alone, we’ve been on a wide range of trains in Canada, Alaska, China, Mongolia and now Russia. Some local trains, some sleepers, some pretty plush, others pretty rough around the edges and definitely showing their age. Hands down, the best train experience is to be had on the high-speed bullet trains, like the train we took from Shanghai to Beijing. Russia also has a very nice bullet train on the Moscow to St. Petersburg run and we took it on the trip out to St. Petersburg and when we returned to Moscow.

First, we were absolutely delighted that our Finnish daughter, Laura Honkanen (AFS high school exchange in 2003/2004), and her parents, Samuli and Nana Honkanen, took a ship from their home in Helsinki to meet up with us In St. Petersburg.

In the picture below from left to right: Samuli Honkanen, Laura Honkanen, Holly Melton, Nana Honkanen:

St. Petersburg was built on a series of islands, on the river delta where the Neva River flows into the Gulf of Finland on the Baltic Sea – Peter the Great established this city in 1703, relocated his capital here from Moscow, and forced “European” society down the throat of his fellow Russians. Modeled after Amsterdam, there are canals and bridges linking everything together into an impressive metropolitan area. Every night from 2 – 5 a.m., the various bridges are lifted to allow commercial river traffic to navigate the canals – all land traffic stops for these 3 hours. You can imagine that locals are very aware and avoid getting caught out. Who wants to sit in their car or stand on the street, waiting for the bridges to be lowered?

Here’s a view up one of the canals at night. At the end of this canal is the Church of our Savior on Spilled Blood:

BAD LUCK! Due to high winds, combined with a high tide, there was a threat of flooding and the local authorities closed the dam on the Finnish Sea, to protect the city from flooding. The ship captain’s attempted to get to port ahead of the closure by steaming at full-speed from Helsinki to St. Petersburg, they didn’t make it in time. This left the Honkanen family and all the other passengers, stuck on a ship in the Gulf of Finland, cooling their heels for an extra 14 hours – VERY FRUSTRATING. Then, to top it all off, once they disembarked and got on the shuttle for their hotel – yup, you guessed it – it was 4 a.m. There was another hour delay, waiting for the bridges to be closed! It speaks well of their character, that they managed to smile when we finally met up mid-day on Monday – roughly 24 hours after the original plan.

We met the Honkanen family at the Monument and Museum to the Heroic Defenders of Leningrad. The monument and the museum below the monument are dedicated to the Siege of Leningrad by the Nazi Army – the siege lasted for a total of 900 days, from September 8 1941 until January 27 1944. The story of the siege is both heartbreaking and inspiring to see how the brave people of Leningrad endured the hardship. http://www.saint-petersburg.com/history/siege.asp

Sobering that more than 50% of the deaths in St. Petersburg (900 plus days long) were from starvation, rather than war related injury. Here’s a photo inside the Siege Museum below the monument:

Visiting the Saints in St. Petersburg:

The day after we arrived in St. Petersburg was Sunday and we had the opportunity to worship with a local church (see photo below – the lettering in blue is the church signage). This is a congregation associated with the Institute of Theology and Christian Ministry and the home congregation of Joel Petty (a missionary our home church in Santa Barbara sends a little support to). These brothers and sisters in Christ were welcoming – each one that spoke any amount of English made a point to speak to us.

Below is a photo of Edgar Egirev and his sweet daughter. He is the President of the Institute of Theology and Christian Ministry, and graciously sat by Mark during the sermon and translated the important points.

There was a guest speaker from Belarus, who gave an energetic sermon that was clearly enjoyed by all (and now we have a standing invitation to join the saints in Belarus in their worship). We were able to meet Joel and chat for a few minutes. But due to his travel schedule and ours, we didn’t have an opportunity to spend any real time together.

Recommended by Joel, and a member of the St. Petersburg congregation, Elina is a tour guide associated with the Privyetrussia Group. (Privyetrussia@gmail.com or +79215800925). We highly recommend Elina to anyone visiting St. Petersburg! With her excellent background in art history, Elina adeptly shepherded us through palaces, the city, and art museums with skill and ease. The Hermitage and Russian Museum would not have been nearly as interesting without her. (By the way, while there are significant disadvantages to traveling this time of year, being able to walk through the Hermitage and stand in front of the art work without any crowds was fabulous. I enjoyed this much more than the Louvre, simply because of the lack of crowds). That’s Elina with the black hair in the photo below – you can see how wonderful the architecture in the winter palace is – as well as the paintings.

Seeing the Nutcracker in the theater where it debuted:

The Mariinsky Theater’s interior – quite swanky

We’ve noticed a phenomena that we’re calling “instant rapport”. While traveling in a non-English speaking country, there is a sense of instant delight when you hear an English speaker speaking. This is followed by an instant rapport based simply on the ability to easily communicate. This has been true numerous times on our train trips, but also in St. Petersburg. Mark and I had a lovely pre-ballet dinner at Vincent, an Italian restaurant across from the theater, where we met Mr. and Mrs. Warren Clark. We chatted just a few minutes, but then waved at each other from our seats at the ballet. The Clarks have been living in St. Petersburg for 2 ½ years and have another 6 months to go. Mr. Clark is President of the LDS mission for northwest Russia. During a break he came up to our box, gave us his card, and offered his services if anything should go wrong during our stay. How generous was that!

To our delight, both Jenny and Mark, our Trans-Siberian Railroad vodka/travel buddies, were able to get tickets to the Nutcracker – so we got to visit with them again (horrible picture, Jenny – but not as bad as white shorts on a pyramid). 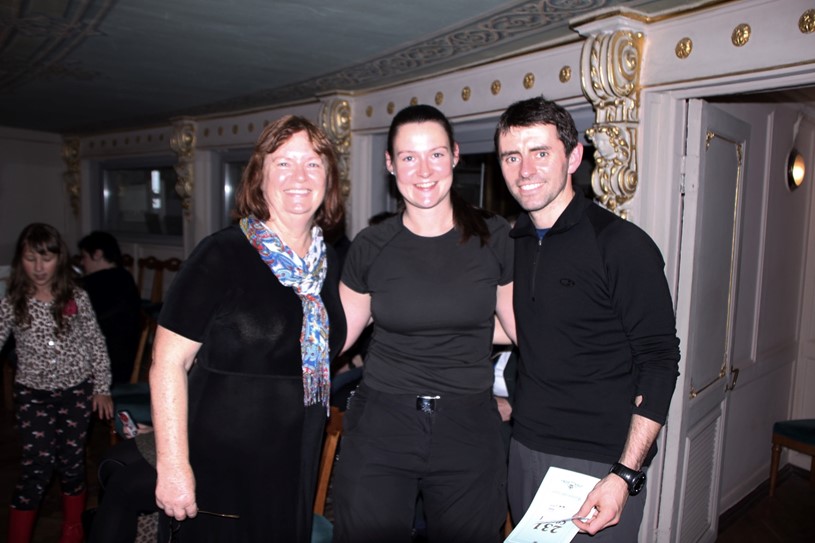 Catherine’s Summer Palace is a few miles outside of St. Petersburg proper. Here’s a view of the front. During WWII, the German troops did take this area and used the palace. When they had to retreat, they detonated huge bombs and destroyed large sections of the building. As you can see the outside has been repaired and each year they restore and open an additional room inside. 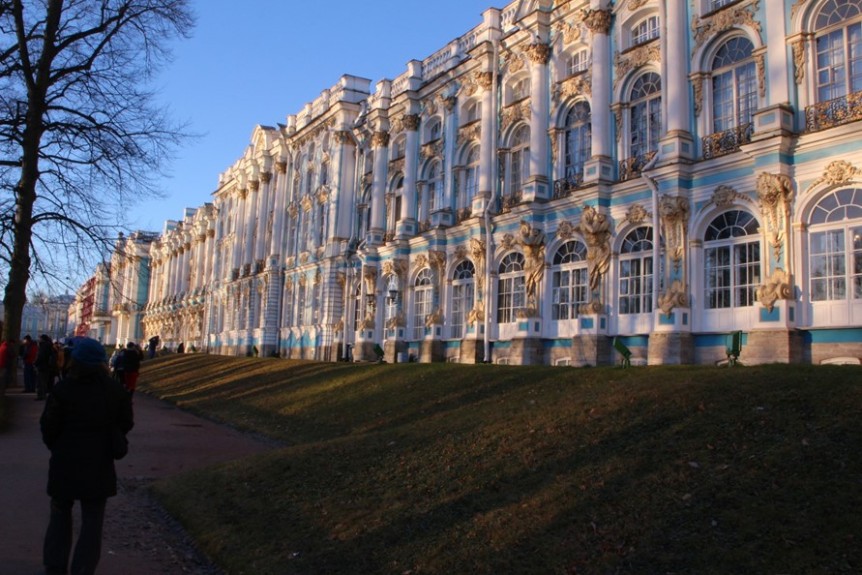 This is the main ball room … absolutely gorgeous. (If you can foot the bill, it can be rented out for events.)

You’ll remember from the park in Hangzhou, I enjoy seeing school children. At each museum or palace that we have been to in Moscow and St. Petersburg, there have been school groups on fieldtrips. Below is a group in Catherine’s palace. You see the back of a docent in costume, who was teaching these kids a dance from the period of the palace. So sweet! I adore the use of these facilities for education.

The Peter and Paul Fortress:

The crew (minus Mark, the photographer) with the Peter and Paul Fortress in the background:

A view of the Peter and Paul Fortress from a nearby bridge: 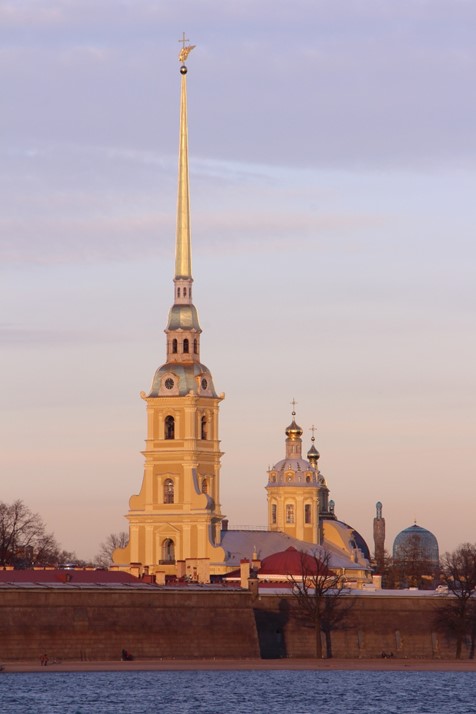 Inside the Peter and Paul Cathedral:

This is the burial place of the Russian Tsars from Peter I to Alexander III. The remains of Nicholas II, his family and entourage were also interred here 80 years after their murder by the Bolsheviks. (See our blog post on the Trans-Siberian Railroad and chasing Romanov ghosts in Yekaterinburg.) 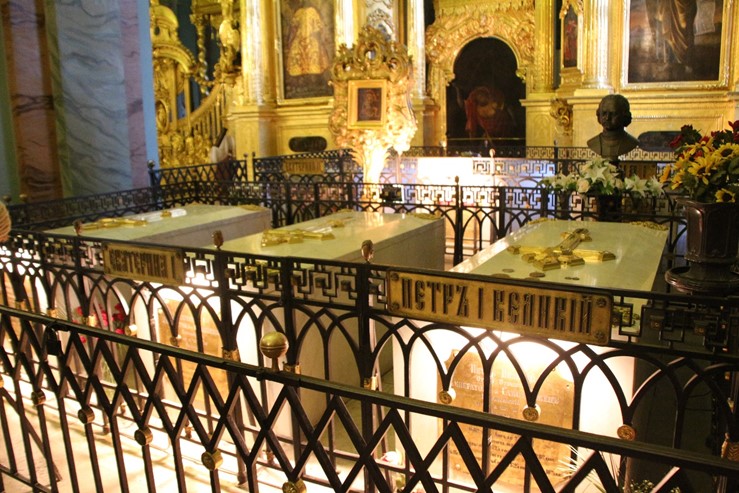 This statue of Peter the Great at the Peter and Paul fortress was sculpted using Peter the Great’s death mask, so although the head, body and hands all seem out of proportion, at least the face should be accurate.

Here’s a photo taken at sunset near the river bank of Hare Island – the site of the Peter and Paul fortress:

The outside of the Hermitage museum – this part was formerly the winter palace of the Tsars, so the rooms themselves are as beautiful as the artwork.

Here’s an example of one of the particularly beautiful rooms, the Peter the Great Throne Room:

The Hermitage is well known as a world class museum with an incredible collection. Here are a few pictures of some of the highlights we enjoyed on the very effective tour Elina gave us of this beautiful museum. 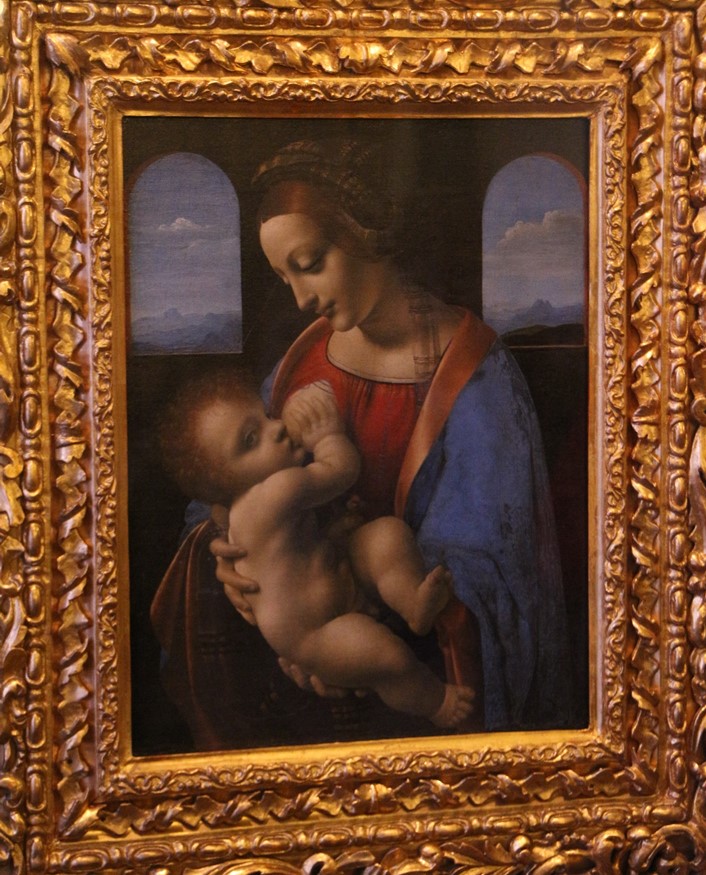 The Holy Family (Madonna with a Beardless Joseph) – Raphael 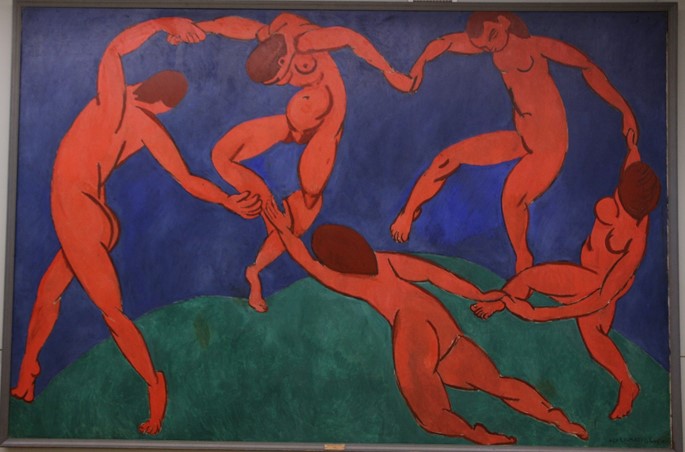 The main staircase of The Winter Palace (The Hermitage).

The Churches of St. Petersburg:

The restoration work that is going on throughout Russia is very impressive. Churches that weren’t destroyed outright during the Communist Era, were converted to other uses like museums.

Below is St. Isaac’s Cathedral, converted to a museum of religion and atheism by the communists. Now nicely restored. 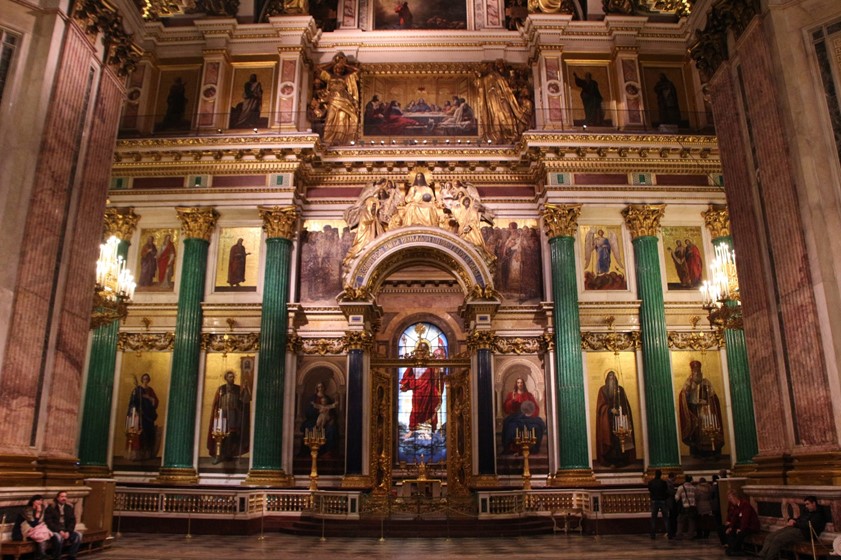 Looking up at the inside of the main dome. 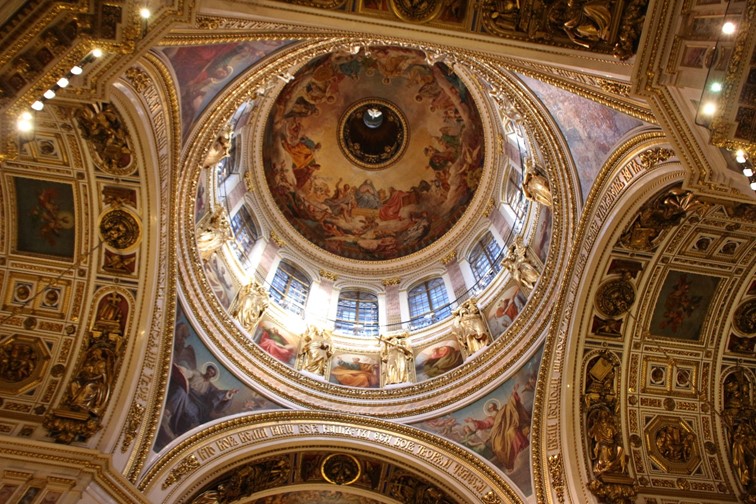 Church of Our Savior on Spilled Blood: Got to love those turrets!

I don’t think we’ve said much about getting around the cities. Besides of course walking, we are using subways and some buses. We are ridiculously pleased with ourselves when we get to the correct place. This is especially true in Russia, since the Cyrillic letters are a challenge for us. St. Petersburg (like Moscow) has very deep subways – good in times of war. Some of the trains look fairly vintage. This was a particularly nice subway train – still had all the fixtures from the 1950’s in really good condition (not too crowded either). 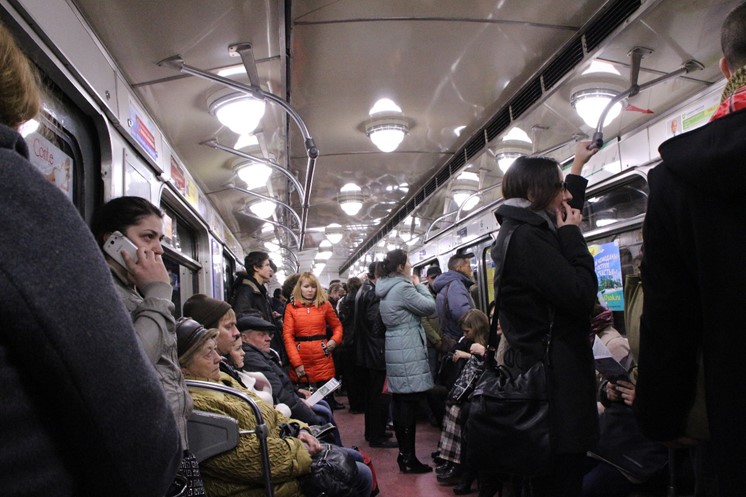 The last day we were in St. Petersburg, Mark (the photographer) was sick and stayed in the hotel room to get better. I enjoyed a visit to the Russian Museum with Elina – no photo’s to share. Unlike the Hermitage, the Russian Museum is focused on Russian art. My memory of the Hermitage in the late 1970’s was walls covered with icons. Today a fraction of those icons are displayed in the Russian museum … so much easier to see and enjoy.

Mark and I agree that of all the cities we have seen in Russia, St. Petersburg is city we would most like to come back to. Perhaps as an add-on to a trip to Scandinavia. We still have the fountains at Peterhof to see and the Hermitage collection requires more than one visit! 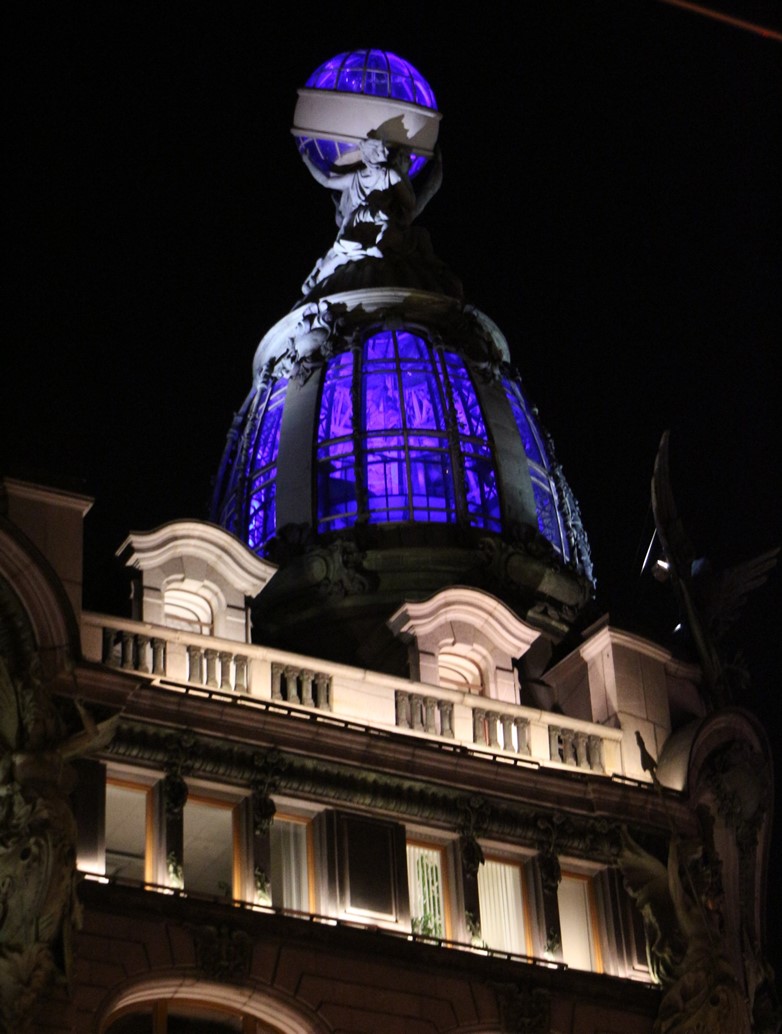 Categories: Russia, Trip Around the World