If Moscow is the center of the Russian universe, the Kremlin is the holy of holies, the seat of the Russian government and at one time the center of the Russian Orthodox Church. The city was founded in 1147 with the building of a wooden fort. The Kremlin is a large walled citadel, the present walls and many of the cathedrals inside date to the 15th century. Inside the walls of the Kremlin are churches, museums, churches converted into museums, and various buildings ranging in style from Romanov imperial classicism to 1960s Soviet modernism. Parts of the Kremlin, the Government and Presidential estate, are off-limits to visitors.

Here’s a view of a section of the Kremlin wall taken from inside the Kremlin. Note the Moskva River just beyond the wall. At one time there where two rivers bordering the triangular shaped Kremlin, aiding in its defenses.

Upon entering the Kremlin, our first stop was the Armory Chamber. With that name, I assumed the Armory would mostly be a museum of armaments, suits of armor, that sort of thing. It does display some of that, mostly highly decorated armor not intended for use on the battlefield, but this is much more of a museum displaying the riches of the Romanovs and rich gifts given to the Tsars by nobles and foreign monarchs. There are elaborate silver and gold items, Faberge eggs, crowns, scepters, orbs, carriages, everything a monarch needs to demonstrate their power and prestige. I was impressed.

In the same building, but an additional ticket is the Diamond Fund Exhibition. It contains (according to the exhibition pamphlet) “…a world-famous state collection of the symbols of the royal power (regalia), outstanding jewelry of the 18th-19th century, rare precious stones, …the Yakut diamonds of extraordinary sizes and unique platinum and gold nuggets.” Basically this is Russia’s version of the crown jewels. Two-thirds of the collection was sold off at Christie’s in London in 1927 to raise funds for the Soviet Union’s economy. The remaining one-third is still pretty impressive.
Here’s Holly posing patiently in front of the Armory Chamber:

Turning the camera over to Holly and pointing it up the same street from the previous photo’s vantage point, she took this picture of me in front of The Grand Kremlin Palace. 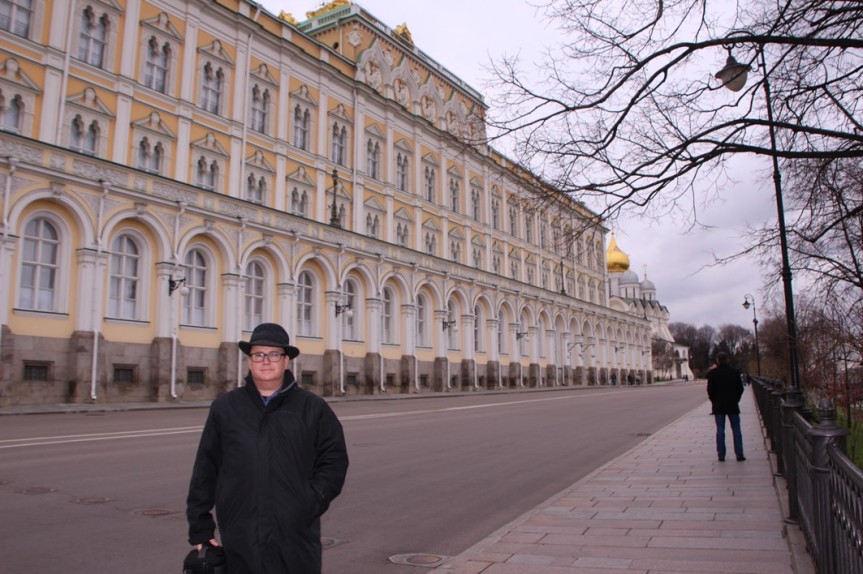 As we continued up this street we approached Cathedral Square. One church was clearly not enough. There are four cathedrals on the square:

Behind Holly to the left is the Assumption Cathedral. To the extreme right of Holly is the Archangel’s Cathedral.

The Cathedral on the left is the Annunciation Cathedral and on the right a better view of the Archangel’s Cathedral:

This is the Ivan the Great Bell-Tower, the Assumption Belfry and the Filaret’s extension. Inside there was an exhibition with yet more very ornate crowns and symbols or royal power and authority.

The Tsar Cannon is the largest-caliber cannon in the world, but has never fired a shot. The guide book says that the cannon balls don’t fit the cannon, but doesn’t say whether they are too big or too small. I think the balls are too big, but you be the judge.

Like our White House, the Kremlin is the working seat of the Russian Government. We saw Putin’s building with the Presidential flag flying above. Here’s a photo of another building inside the Kremlin that looks to me like it was built in the 1960’s:

Here I am leaving the Kremlin, passing through the Trinity Tower gate:

Outside the Kremlin wall is the Tomb of the Unknown Soldier. Beneath the marble lies the body of one of the soldiers who helped stop the German advance on Moscow in 1941 during the Great Patriotic War (WWII).

Here’s a close up of the guard seen in the picture above. There are three guards total, one on each side of the tomb and one standing further off on the left of the tomb. The honor guard once stood watch at Lenin’s Mausoleum, but are now stationed here. There is an hourly changing of the guard and although we walked by this site several times, we never were there at the right time to watch the honor guard change.

This picture was taken from the back of St. Basil’s cathedral and is one of the seven sisters, example of mammoth Stalin Era architecture.

Lenis has been repeatedly described to us as a “dreamer”. Every statue I’ve seen of Lenin has him standing and looking to the future and pointing the way. Here’s the one statue of Lenin I saw where he’s seated and not pointing. This statue is behind a Library of Communist works and depicts the Lenin as a scholar with a book and a pen. 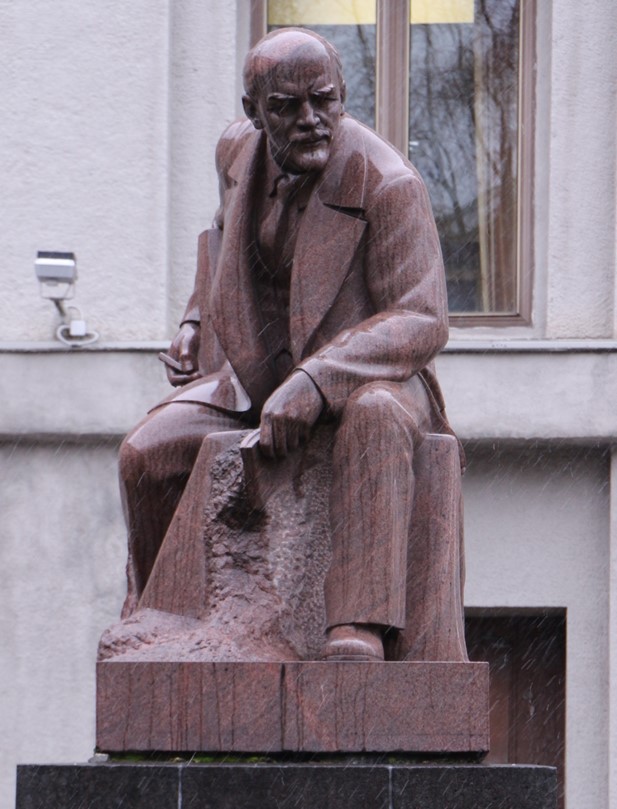 This rather dreary building is the Telegraph office and was the center of communications during The Great Patriotic War. 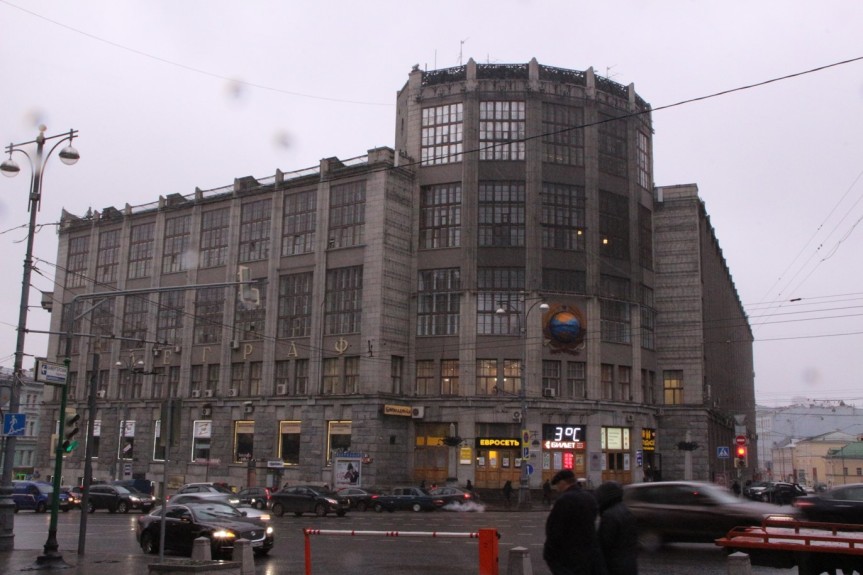 Alexander Pushkin is revered in Russia as the most Russian of Russians. Author, poet and the founder of modern Russian literature, many squares, streets, parks, districts, etc. are named for Pushkin. Here’s one of the statues to Pushkin in Moscow:

On his return to the Soviet Union in 1932, soviet writer and Lenin buddy, Maxim Gorky received the Ryabushinsky Mansion as a gift from the communist government, designed in 1900 by Fyodor Schechtel for the Ryabushinsky family. The mansion today houses a museum about Gorky. http://en.wikipedia.org/wiki/Maxim_Gorky

The design detail that Schechtel put into the building is really quite beautiful. There is a recurrent nautical/ocean theme throughout. Please note the window on the second floor and the waves of iron work on the wall in front of the building.

Here’s a couple of views inside the mansion. Notice the stained glass and the marble bannister:

Eels decorate capital of this column:

Here Holly is descending another section of the central staircase. Note the jelly fish shaped lamp:

Here’s another sunset photo taken from the balcony of our Moscow hotel room: 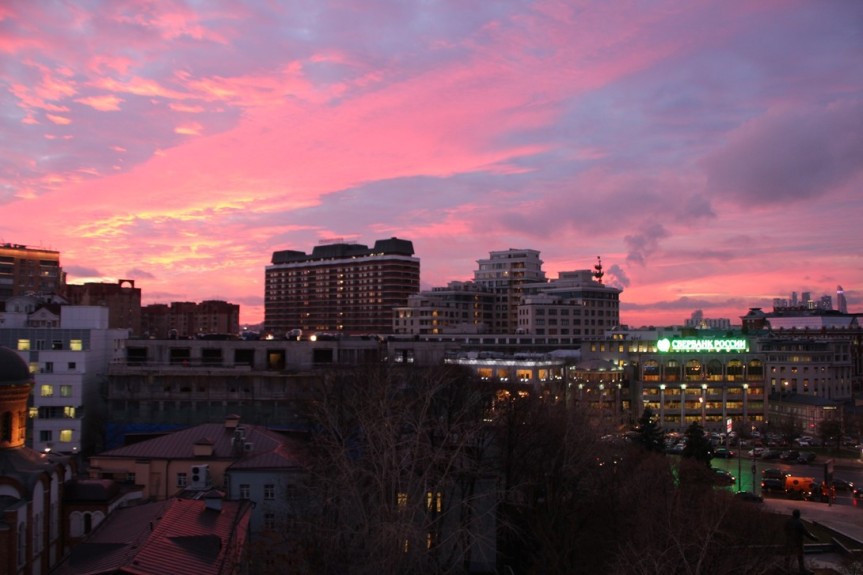 Overall, we had a very nice visit to Moscow and were impressed by the progress made in the post-soviet era. Understandably as the capital of the Russian Federation, Moscow appears to be further along in its development than the second tier Russian cities we’ve seen so far, Vladivostok, Irkutsk and Yekaterinburg.

Categories: Russia, Trip Around the World