The Gorge-ous Yangtze River – Part 1 – From Chongqing to the Wu Gorge.

After a great day in Chongqing, we boarded Victoria Cruise’s ship “Katarina” for a cruise down the mighty Yangtze River to the recently completed marvel of modern engineering known as the Three Gorges Dam.

Our lucky streak continued when we checked in at the front desk of the boat. The young lady at the front desk asked if we would like to upgrade our cabin. I said, “Well, let’s take a look”. She showed us first the standard room we had booked. It was small but nice. Next she showed us their largest suite, very large and very, very nice. “How much?” I asked. An additional $1,500 U.S. dollars. “No way”, we thought. “Thank you, but no”, we said. She then showed us the next level, a mini-suite. This room was an additional $1,000 U.S. Dollars. Again we politely declined and Holly suggested we not waste any more of this nice woman’s time so we told her that we would stick with our original basic room. She took us back to the front desk and told us that we were to receive a free upgrade. She asked us not to tell other guests, since some of them had paid for the larger rooms. We received this corner room (below), which was located at the rear of the ship on the starboard side (right side of the ship if standing on the stern facing the front (bow) of the ship). It was a very nice room, large and airy with windows on two sides. We couldn’t have been more fortunate. Also, I’m not sure if it’s due to the room we received, or if our travel agent booked it for us, but we also received “Executive” status. Executive guests, had their own dining room on the 6th floor, separate from the main dining room on deck 2. We were seated at a dining table with other “Independent” passengers, i.e. those not on an organized tour. Other little benefits we liked were free Wi-Fi and free laundry services (two free pieces per day per person). 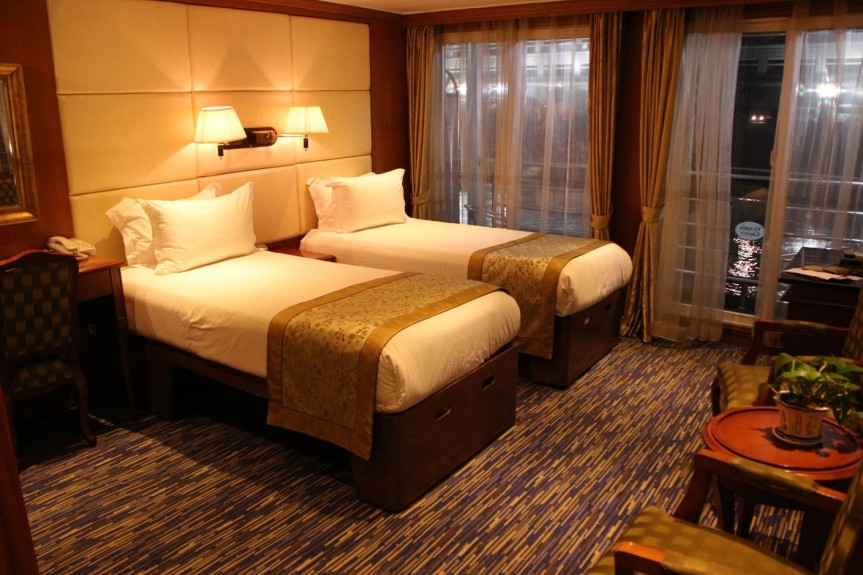 We arrived pretty close to the scheduled sailing time of 9 p.m. so we went out on our balcony which overlooked the dock to watch the boat move away from the dock. There was a delay and we saw a small tour group, which was running late pull up to the dock and their group scuttle onto the ship. As we began our trip down the Yangtze River, there were several very colorful boats that looked like they hosted dinner cruises coming back with their guests. Here’s a picture of one of, what we called, “Party Boats”. 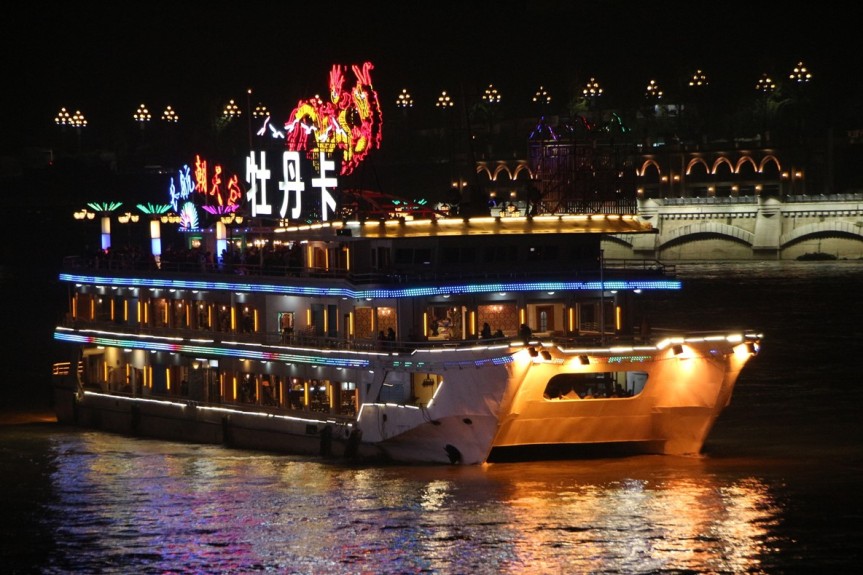 Chongqing is the largest city in the world and the skyscrapers seem to go on forever. It was hazy the night we left so my photos of the skyline at night is not very clear. I did get a photo of this section of the buildings that had a coordinated recurring light show, the lights on each building into the shape of sailing ships. 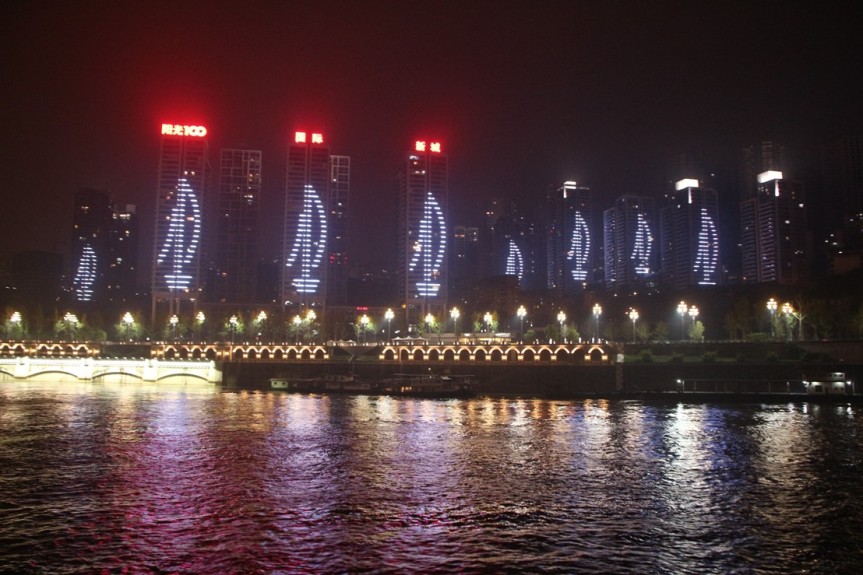 The cruise from Chongqing to the Three Gorges Dam and then Yichang is a 3 night – 2 ½ day journey. Our first morning we awoke to find ourselves moored to another river boat. There are limited spaces for mooring the cruise ships, to solve this problem they tie up their ships three or four abeam. To exit this ship we walked through one, two or even three other ships to get to the gangplanks that lead to shore. 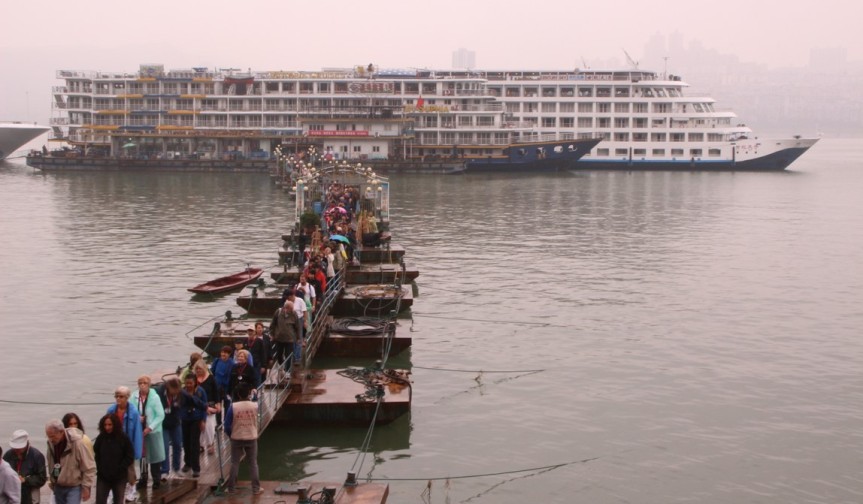 The morning of the 1st day we visited Fengdu – about 110 miles downstream from Chongqing. Having nearly two thousand years’ history, the Ghost City combines the cultures of Confucianism, Taoism and Buddhism with the mystique of ghosts. Fengdu got its name as the Ghost City in the Eastern Han Dynasty. Two officials from the imperial court Yin Changsheng and Wang Fangping decided to come to Ming Mountain to practice Taoist teachings. Through self-cultivation they were thought to have become immortals. Combining their surnames produces the term “Yinwang” meaning the “king of hell.” Later, during the Tang Dynasty a stupendous temple was erected on Ming Mountain depicting life in hell. It displays demonic images and torture devices and reflects the notion that good people will be treated well in the afterlife and that bad people will be punished by going to hell. See: http://www.travelchinaguide.com/river/yangtze_attraction/fengdughostcity.htm for more information. 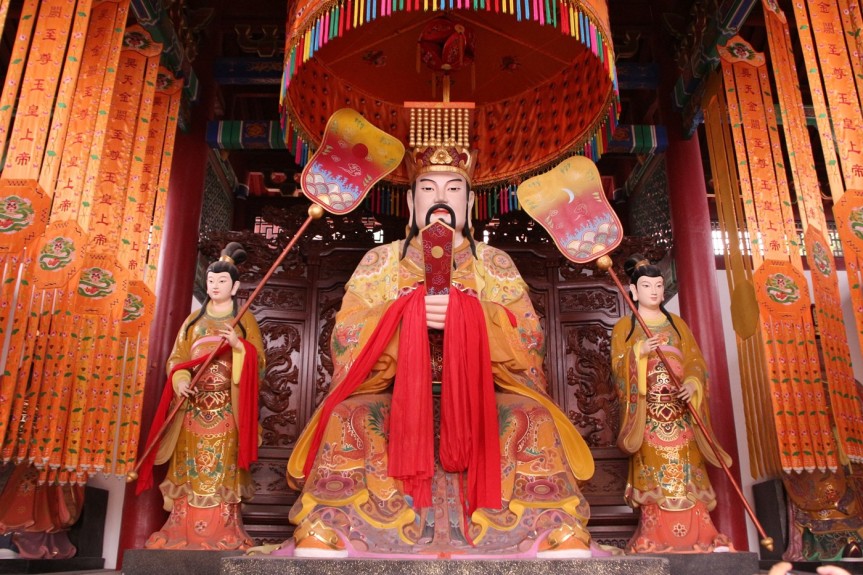 Here I am with my evil twin (or is he the good one and I’m his evil twin?): 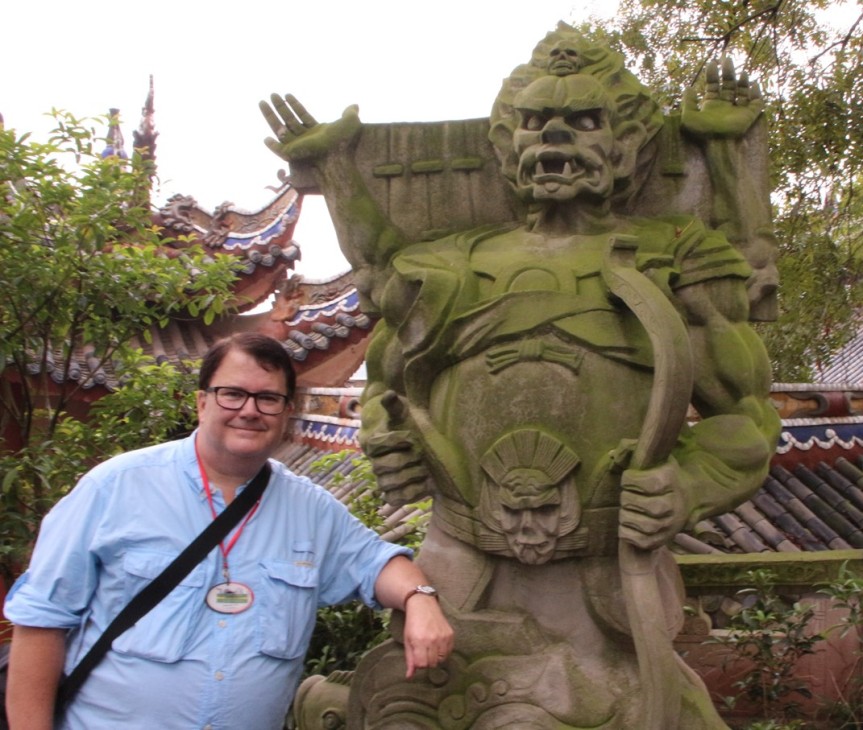 Shibaozhai is a rocky and craggy hill with extremely steep sides and is about 200 meters (700 feet) tall on the bank of the Yangtze River. With the construction of the Three Gorges Dam and the resulting rise of the water, Shibaozhai is now surrounded by water and the Chinese have built a dam around the hill to protect the Pagoda. To get to Shibaozhai, we crossed the hanging bridge which gives and sways and reminded us of a bridge on Tom Sawyer’s Island at Disneyland (when we were kids).

A temple was built on top of the hill during the reign of the Emperor Qianlong (1736-96) and it was accessed by climbing stairs cut into the rock face and holding onto an iron chain attached to the cliff. Here is a photo of the temple: 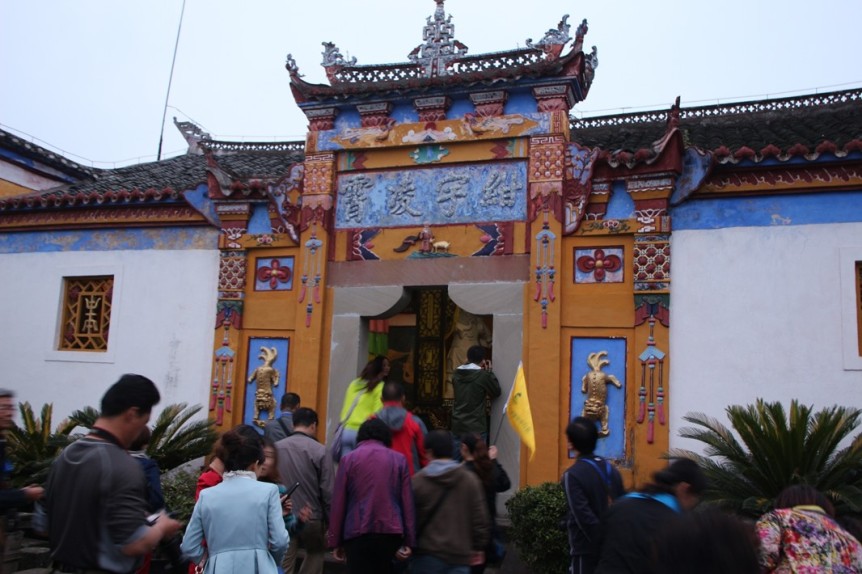 A nine-story wooden pagoda was added in 1819 so that monks and visitors would not have to suffer the discomforts of the chain ascent. The Pagoda was built entirely of wood, with no nails and many of its timbers rest on the rocks of the cliff face. We were informed that almost all of the wood in the Pagoda is original construction. We climbed up the wooden Pagoda most of the way, but the last little bit, we climbed the traditional way using the stairs cut into the rock and the iron chain. Here we are in front of the Pagoda: 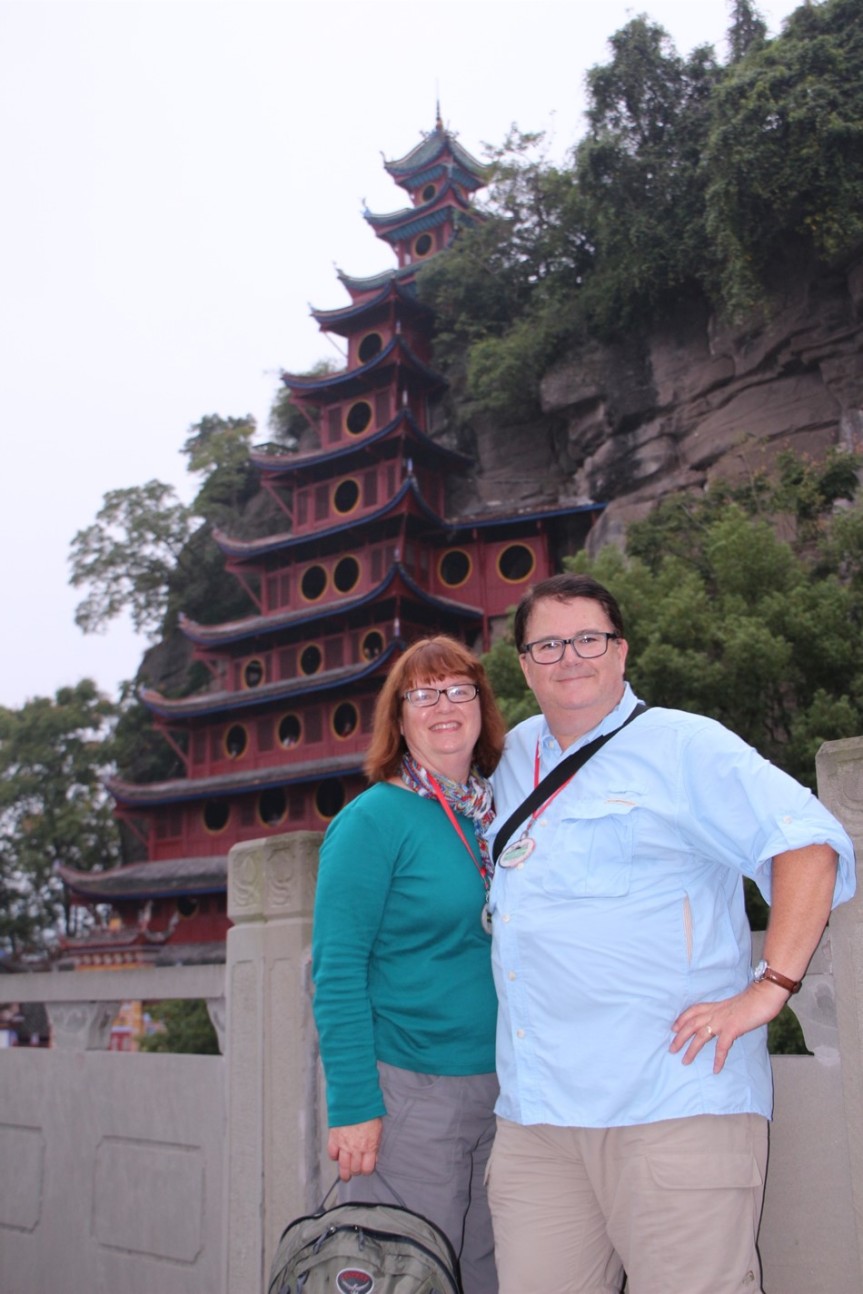 And here is some our fellow passengers climbing up the last bit of the rock face: 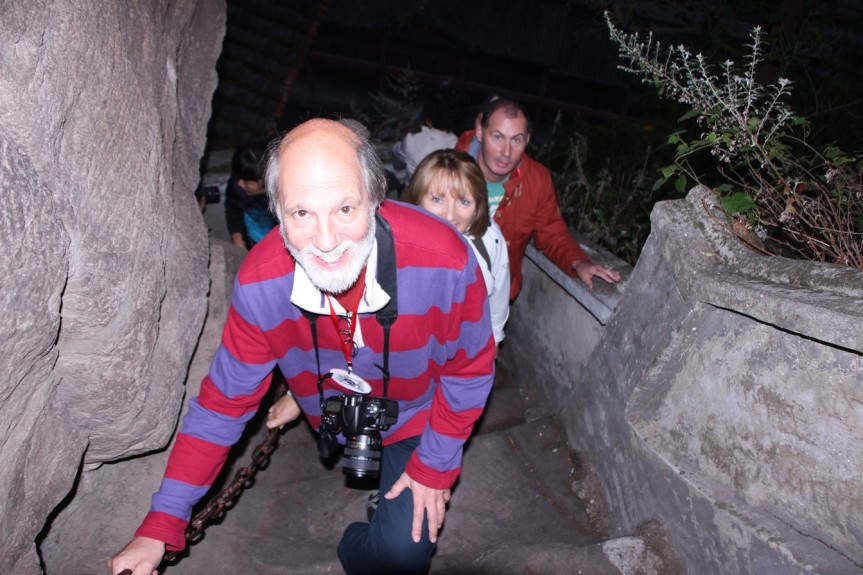 Shibaozhai was an optional tour and we paid extra for it, but we were both glad we had gone.

The second day of our river cruise started with a tour of Baidicheng (White Emperor City) – this was our second optional tour.

Fengjie is an ancient town located just above the western entrance of the Qutang Gorge. Prior to the building of the Three Gorges Dam, the swift currents of the Yangtze squeezing through the narrow and rocky gorges, made passage on the river at this point difficult and dangerous. (Now it’s a very easily navigable.) Due to its easily defensible position, Fengjie has been a refuge for would-be kings and rulers.

Just downstream from Fengjie is Baidicheng or White Emperor City, an ancient temple complex located atop a hill directly overlooking Qutong Gorge. White Emperor City dates to 25 A.D. and is named after Gong Sunshu, a petty Han Dynasty official, turned rebel king, who dubbed himself the “White Emperor”. Fengjie is known as a “poets’ city”. The White Emperor City is filled with temples and gardens that celebrate the literary tradition of Fengjie as expressed in poems of Li Bai and Du Fu.

I took this picture of the Qutang Gorge from The White Emperor City. This is the same gorge pictured on the back of the 10 Yuan note. 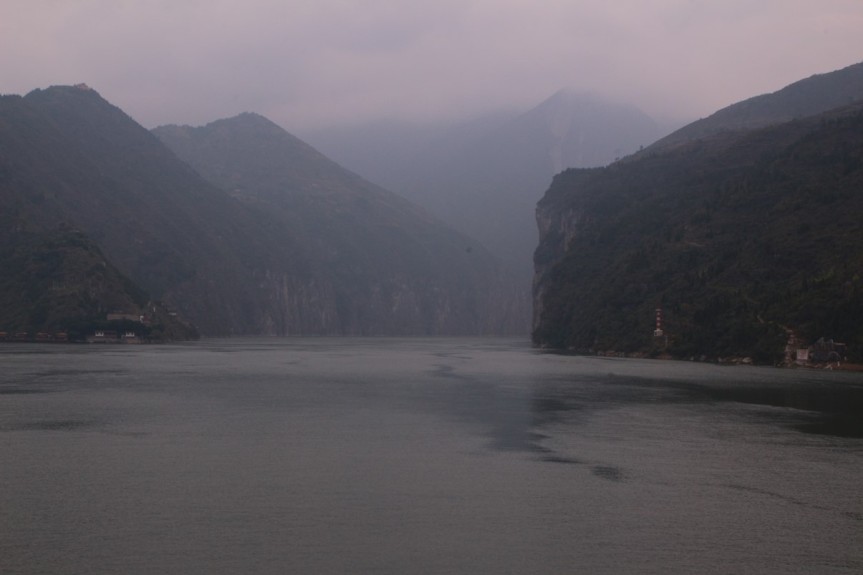 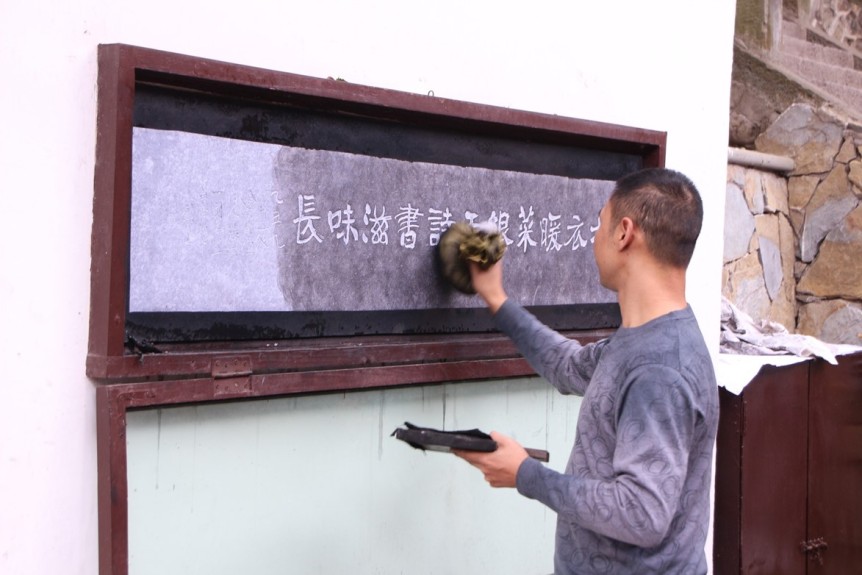 After our visit to White Emperor City, our ship began her voyage, passing through two of The Three Gorges in the afternoon, first the Qutang Gorge, (pictured above) and then about an hour later, Wu Gorge (pictured below). As our ship steamed down river, we stood on the deck of the Katarina taking pictures and listening to commentary from the on-board River Guide. 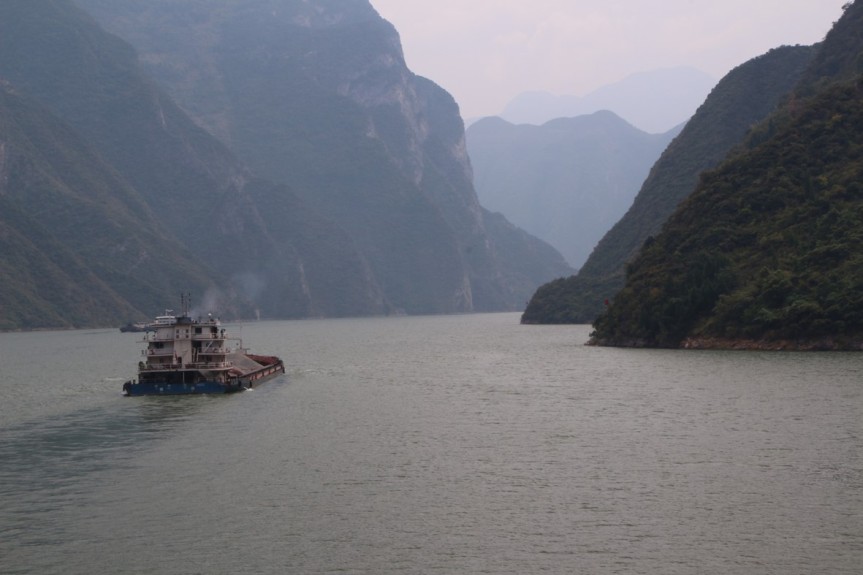 From: http://www.chinatourguide.com/yangtzecruise/goddess_peak.html The Wu Gorge is named after Wu Mountain. Looking down the Yangtze River, Wu Mountain displays 12 high peaks, which are described by legend as being 12 fairy spirits. Among them, the Goddess Peak (Shenu Peak) is the highest and most notable. The peak is topped by a large rock that resembles a sculpture of a girl looking down upon the boats in the river (see picture below – arrow points to rock resembling a girl).

According to legend, this rock resembling the figure of a beautiful maiden is actually the embodiment of Yao Ji, the youngest daughter of the Heavenly Mother. The young fairy invited her eleven sisters to visit the earthly world, as she felt lonely in heaven. When they arrived at the Wu Gorge, they encountered Yu the Great controlling the flood there. Moved by his spirit, Yao Ji decided to help by sending him a sealed book relating to the control of water. However, before she decoded the book to Dayu, she and his sisters were caught by the soldiers from heaven. In order to help Yu the Great, they broke the chain used to tie them, and returned to the earth. With the help of Yao Ji and her eleven sisters, the flood was finally overcome. And Yao Ji finally became a protector of the people, guiding sailing boats through the gorge and easing the Yangtze’s infamous floods. Hence the embodiment of the Goddess Peak.

The Goddess rock in the picture below is the small finger of rock just to the right of the two highest peaks: 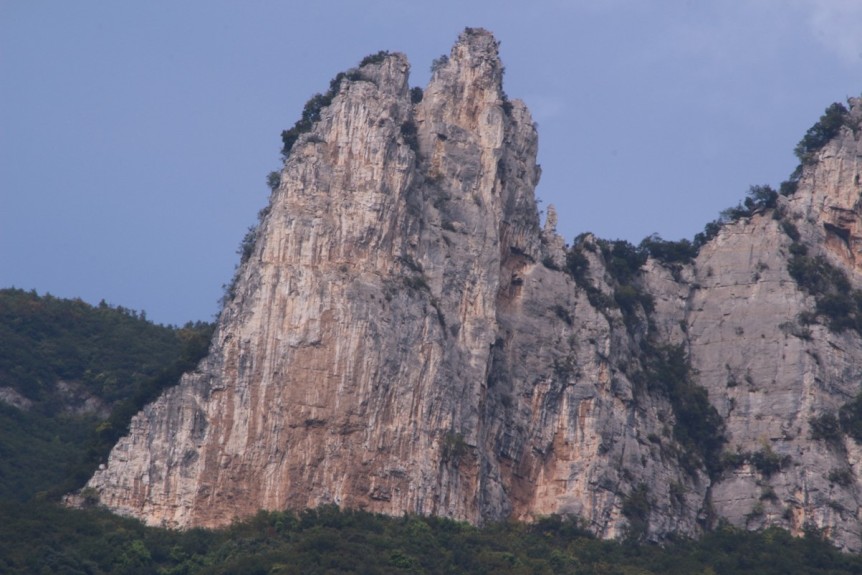 See Part 2 of our Yangtze River cruise for the rest of the story.