On our third day in Beijing we started our day with a tour of some of the Hutong neighborhoods of Beijing, immediately to the North of the Forbidden City. Our tour started by climbing to the top of the Bell Tower.

The Emperor’s Palace, (Forbidden City), was the center of Beijing. North of Palace complex, on the North-South axis that runs through the Forbidden City, are a Bell Tower and a Drum Tower that were used to announce time and other important occurrences. These two structures are located in the same neighborhood as the Hutong we would soon visit.

Here we are in front of the Bell Tower: 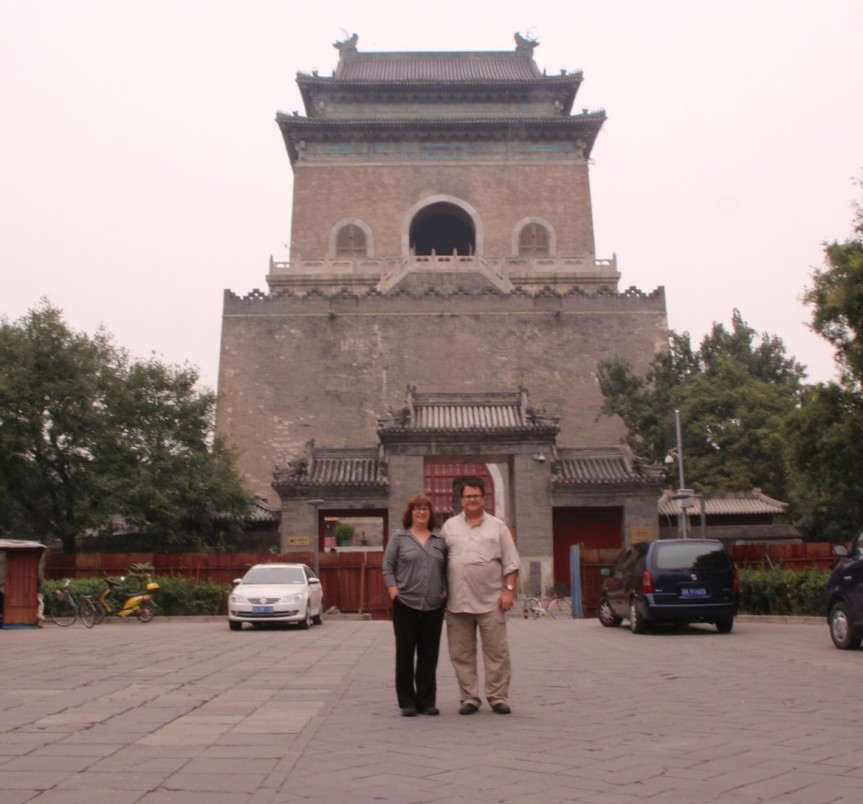 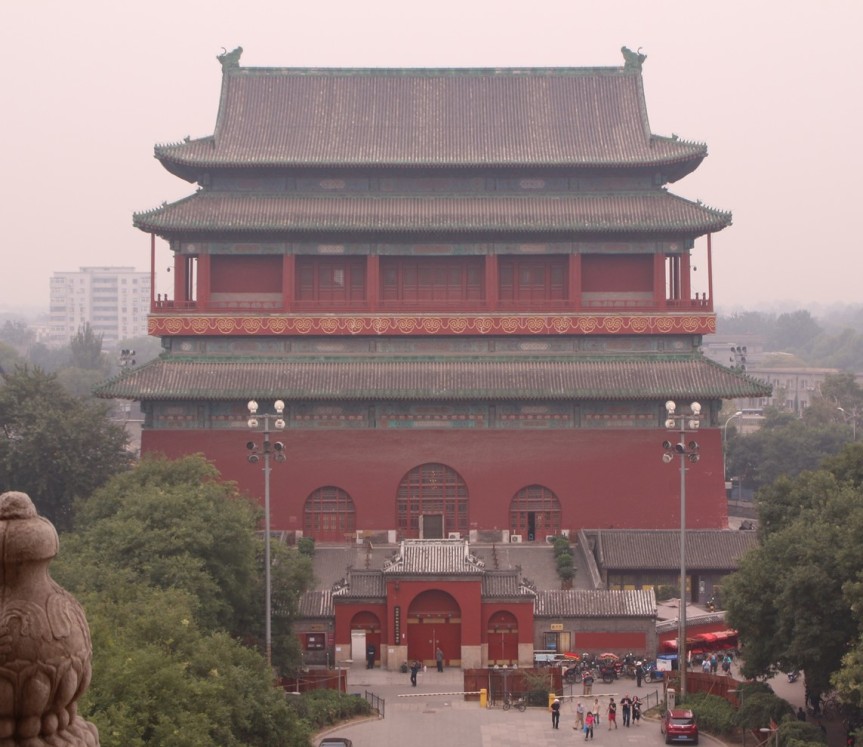 The bronze bell in the Bell Tower is 500 years old and weighs 63 tons. Our guide hired a local guide who lives in the Hutong to show around, here he is with Holly in front of the bell: 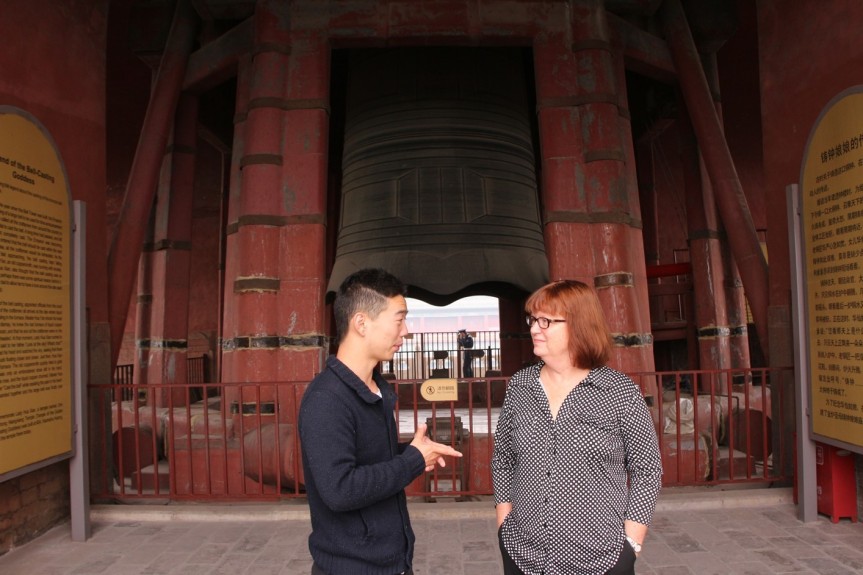 Most of old Beijing seems to have been cleared away. There are some traditional neighborhoods still remaining. From our Trans-Siberian Guide Book, the following explanation of Hutong neighborhoods: “Hutong are narrow alleyways, lined with siheyuan (traditional residences centered around a courtyard), with gates traditionally facing south for more light and in accordance with feng shui principles; hence most hutong run east to west, connected by tiny north-south alleys. The siheyuan belonging to nobility and wealthy merchants were particularly spacious and grand. Between 1911 and 1948, the hutong became overcrowded, as residences previously belonging to a single family suddenly had to be subdivided to accommodate four” (or more) families. Because this neighborhood is so close to the Forbidden City and the center of the city, it is very desirable.

Here’s a view of a portion of the hutong neighborhood taken from the top of the Bell Tower: 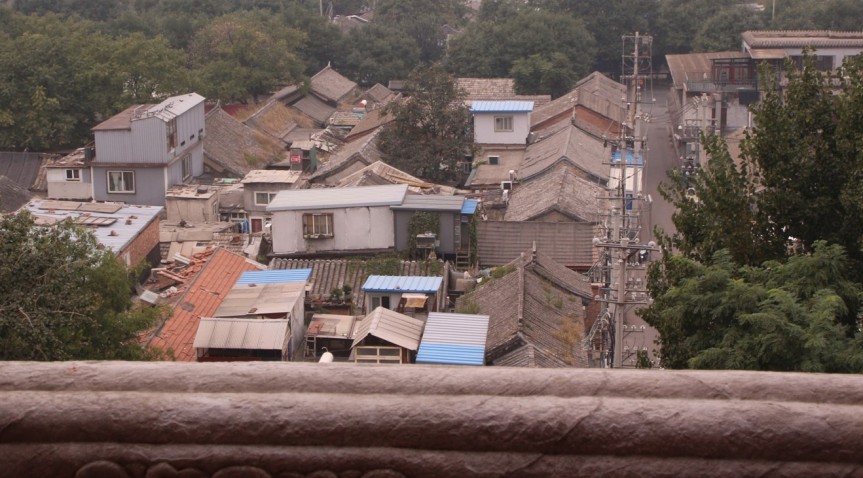 Our tour through the Hutong was by bicycle rickshaw: 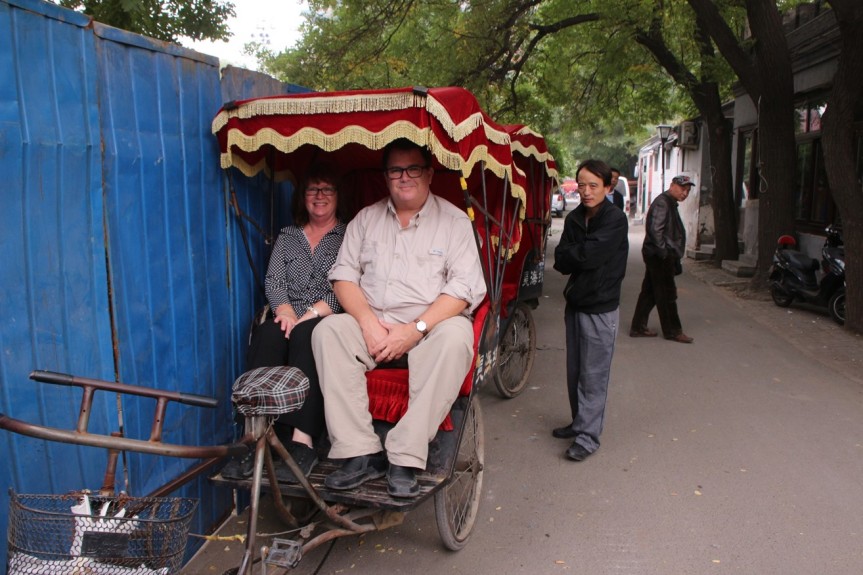 On our tour, we visited a local family who served us tea and shared their life in the Hutong with us and demonstrated their business which is painting inside of bottles. Holly tried painting inside a bottle and let’s just say she won’t be changing careers. 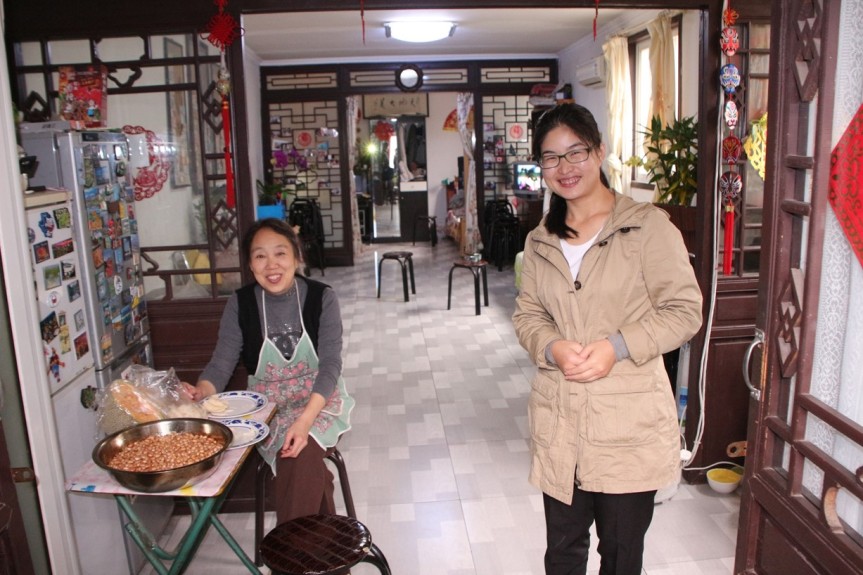 To know how many families are living in a particular siheyuan (former single family dwelling) count the electric meters. This one has a lot of meters. 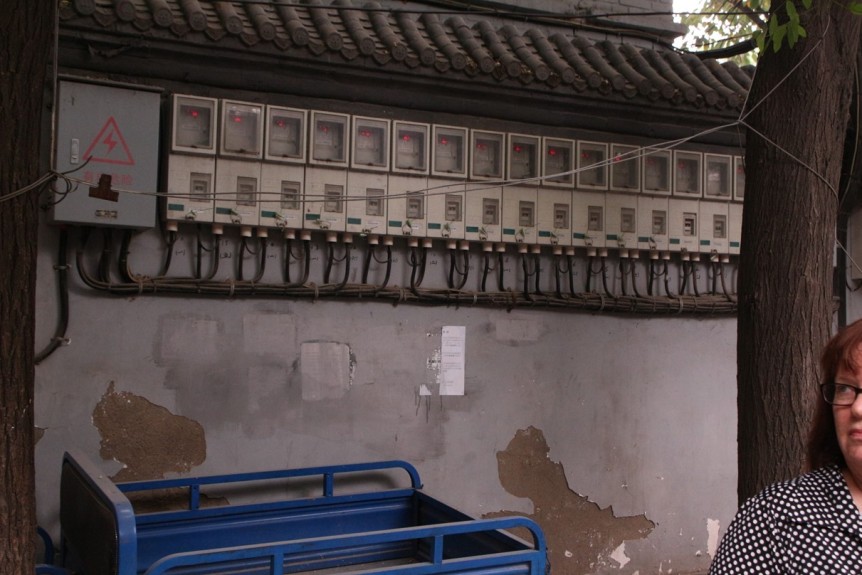 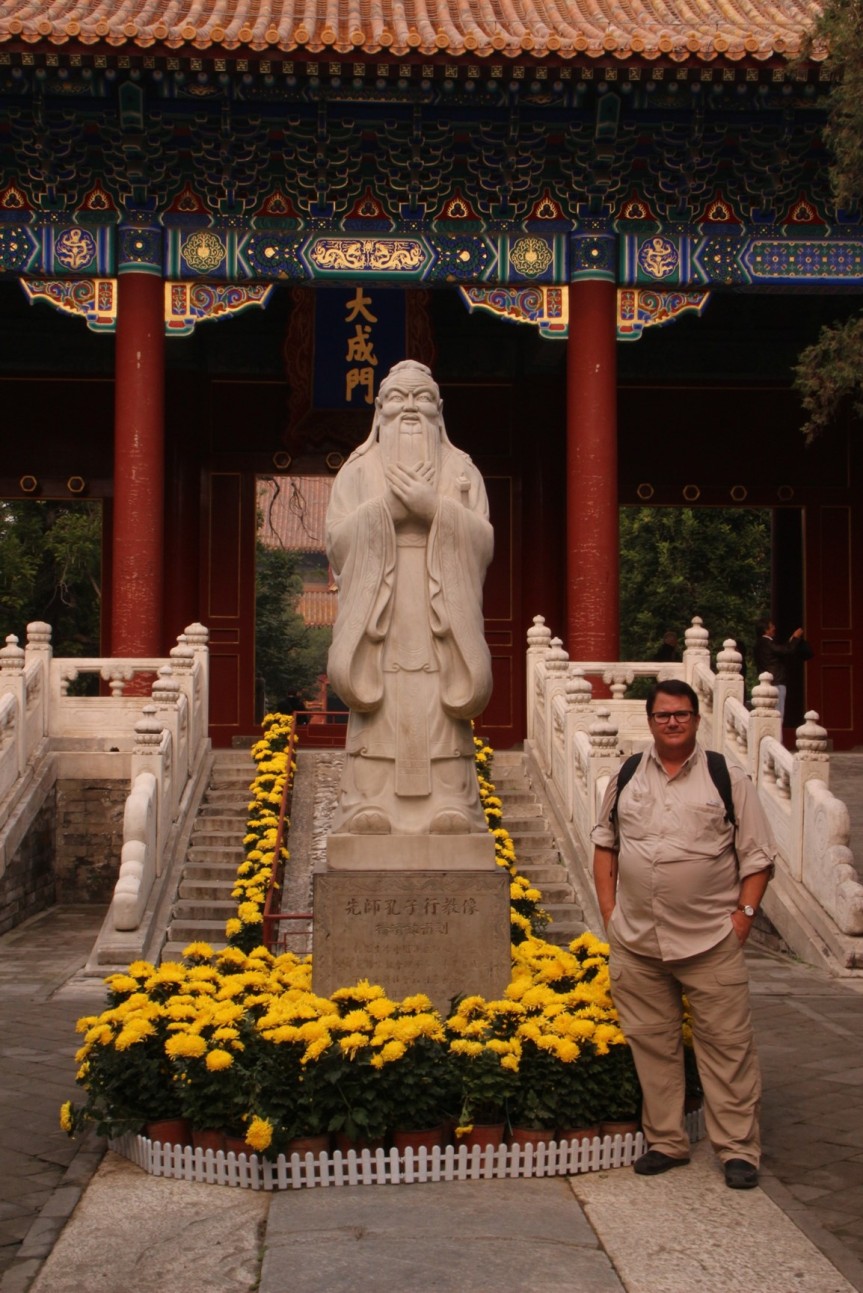 After the Confucius Temple we walked down the street to the Lama Temple. The Lama Temple is the largest and most important Tibetan Buddhist temple outside of Tibet. It was originally the home of a Qing dynasty prince before he became Emperor Yongzheng and moved into the Forbidden City. The Emperor transformed his previous house into a Tibetan Buddhist Temple, and the Royal family converted to Tibetan Buddhism as a way of forging stronger ties with Tibet and its people whom the Chinese had conquered. 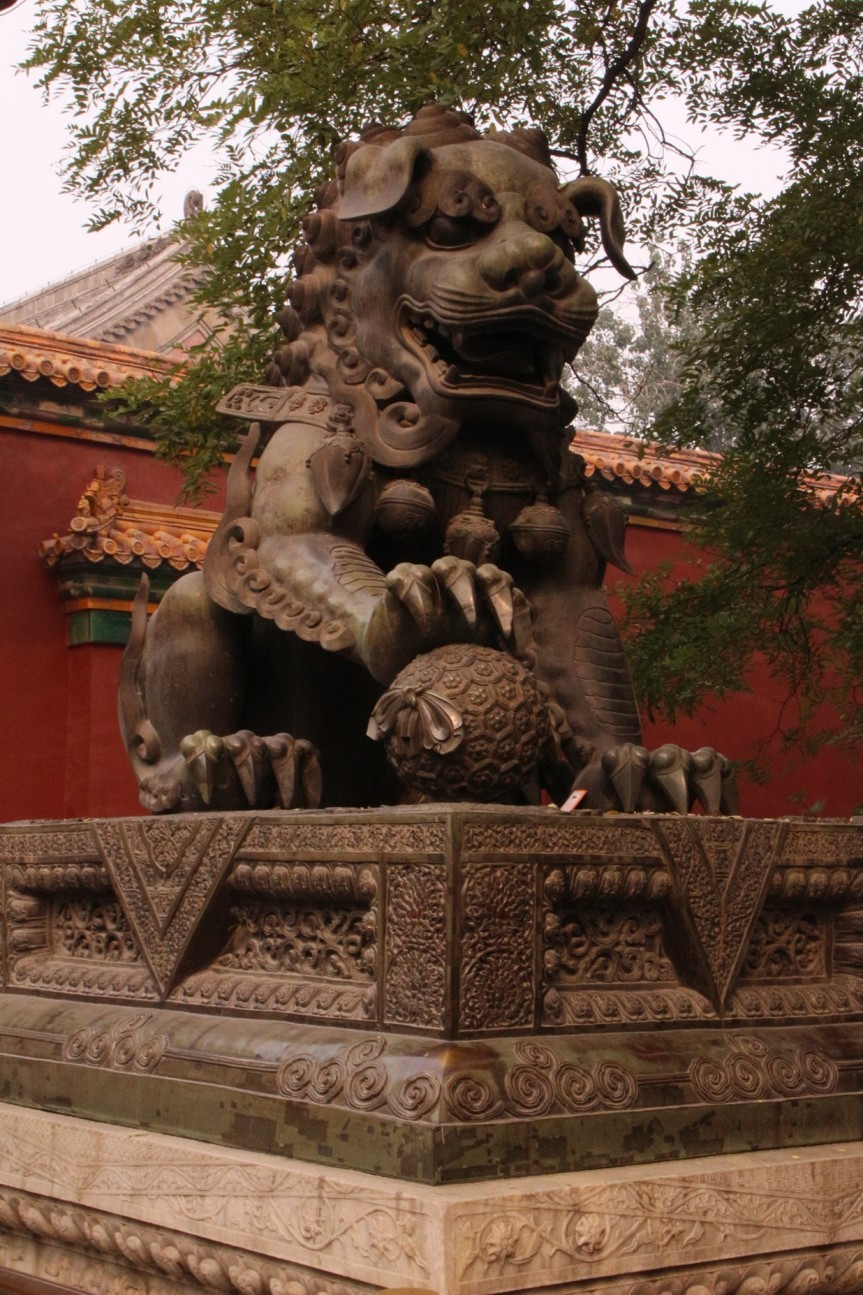 Worshippers crowd around centuries old incense burners. The buildings are brightly painted inside and out with many dragon motifs. The centerpiece of the Temple is an 18 meter tall statue of Buddha carved from a single piece of sandalwood sent to Emperor by the Dalai Lama. Sandalwood is rare and precious, especially a large piece such as this. The Sandalwood was carved and painted and then installed in its current location and the temple built around and over the statue. To anchor the statue in place, 6 meters of it is underground. Sorry, I couldn’t take a photo of the statue because it is considered disrespectful. Here are some worshippers burning incense, notice the wire running on top of the building – these are lightning rods to prevent fire and they are everywhere on old buildings. 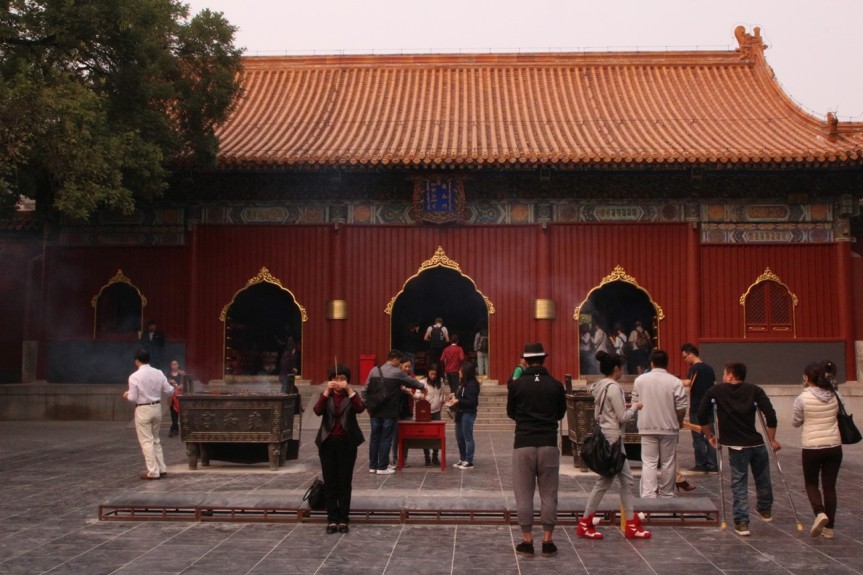 After the Lama Temple we caught a cab back to our hotel (extremely inexpensive by our standards) and later walked the streets near our hotel and ate dinner at a noodle restaurant.

Holly is particularly tickled by these street signs. 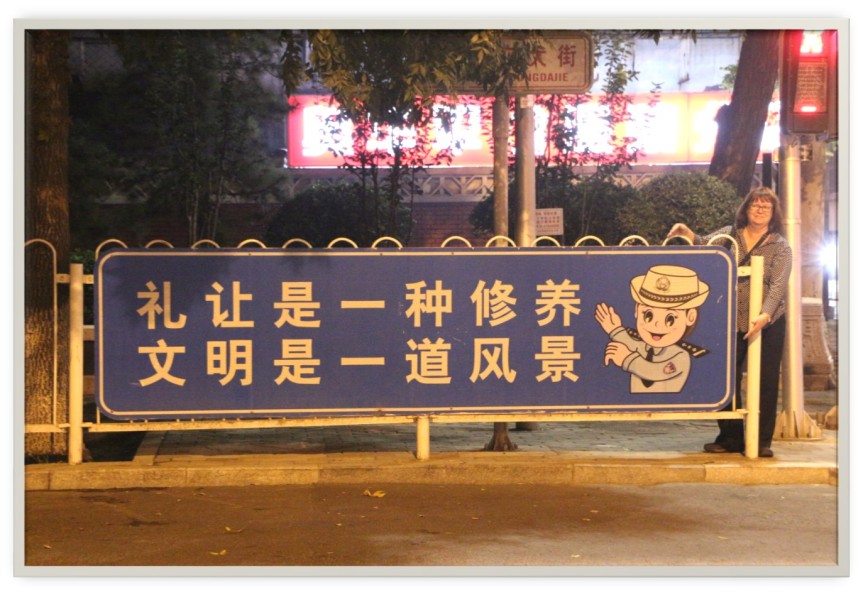