On Monday, October 7th our Trans-Pacific cruise ended in Tianjin, China – a port city 3-hours east of Beijing. Tianjin is a large city and the ship’s Port Lecturer suggested it was worth a visit. Unfortunately, we never saw Tianjin. The port where the Cruise Terminal is located is way out of town in the middle of nowhere.

We were met at the cruise terminal by our tour guide Ping and driven into Beijing in a van. After a little time on the highway leading to Beijing we noticed drivers driving the wrong way on the highway – directly at us. Shortly we discovered why; the highway had been closed at the toll booth ahead because of haze/smog. Some of the drivers had decided not to wait for the highway to reopen. They decided instead to make a U-turn and drive into on-coming traffic to avoid the stoppage.

The traffic closure lasted about 30 to 45 minutes. Ping told us that the authorities sometimes close the highways if the visibility gets bed enough. No one knew how long it would last, so everyone, the truck drivers, tourists on buses, people in private cars, got out to stretch their legs and chat. I met up with some men I’d met on the cruise. Here’s a look at what it looked like, I hope you can see the color of the sky. I don’t remember smog this bad since I was a boy in Los Angeles in the 1960s.

After we arrived in Beijing, we checked into the Capital Hotel and after dropping our bags in our room we headed out to lunch. After lunch we drove to Tiananmen Square and the Forbidden City.

It was the last day of “Golden Week” the national holiday celebrating the proclamation by Mao of the founding of the People’s Republic of China. Tiananmen Square and the Forbidden City were packed with families and what Ping called “foreign tourists”. It took us a while to realize that what Ping was calling “foreign tourists” were Chinese citizens who live outside of Beijing and had come to the capital during the Golden Week holiday. There was a large flower sculpture in the middle of Tiananmen Square that Ping said was only up for Golden Week.

Tiananmen Square is so well known, I hesitate to say much about it. It is a large open square bounded on the North End by the Tiananmen Gate which leads to the Forbidden City and lends its name to the square. On the west side is The Great Hall of the People – where China’s Congress meets. Ping told us that the Great Hall of the People can hold meetings with up to 10,000 people at a time. On the east side of the square is The National Museum of China. On the south end of the square is the Mausoleum of Mao Zedong where Mao’s body lies in state and is visible to visitors.

The Great Hall of the People:

The National Museum of China: 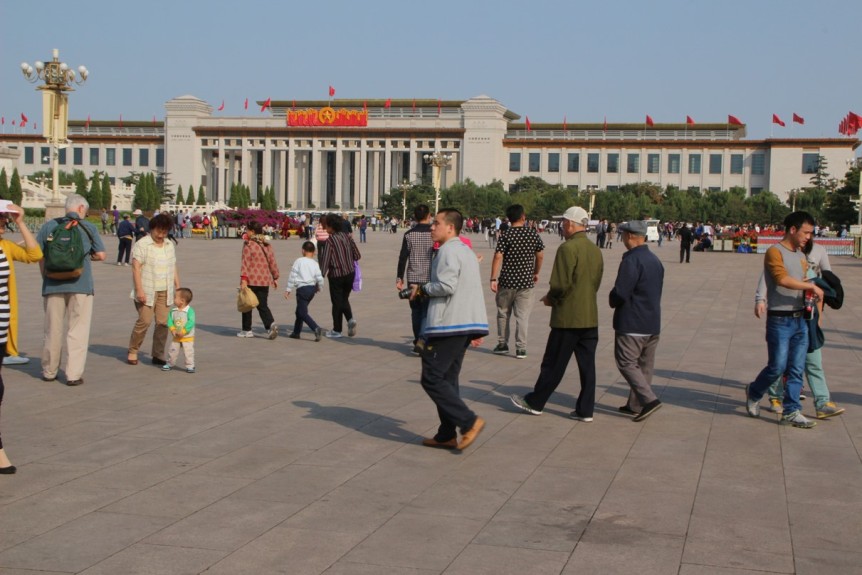 Holly and our tour guide Ping in front of the Tiananmen Gate: 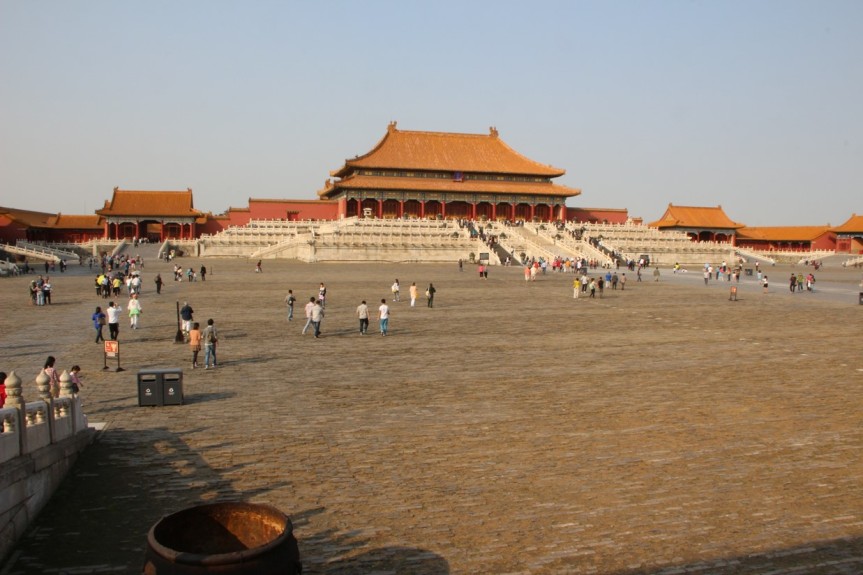 I am required by my daughters to have at least one picture of Holly and me together in each blog. Here’s the required picture of us at the Forbidden City. 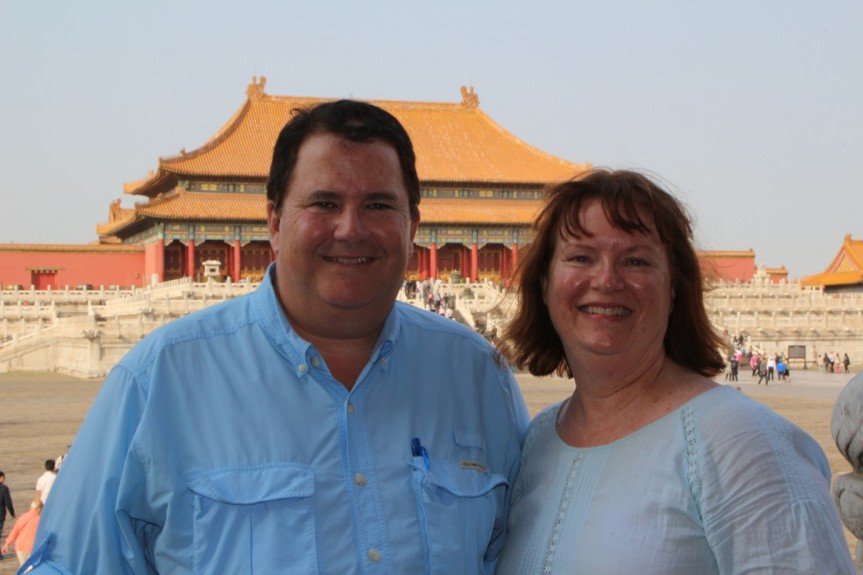 As you tour the Forbidden City, mostly you see the exterior of the buildings and as you can see, there are no trees or greenery, except in the Emperor’s Garden in the rear of the Forbidden City. Ping told us that the courtyards were left open so that potential assassins could not hide behind trees. There are a few rooms on view, such as the Emperor’s bedroom below: 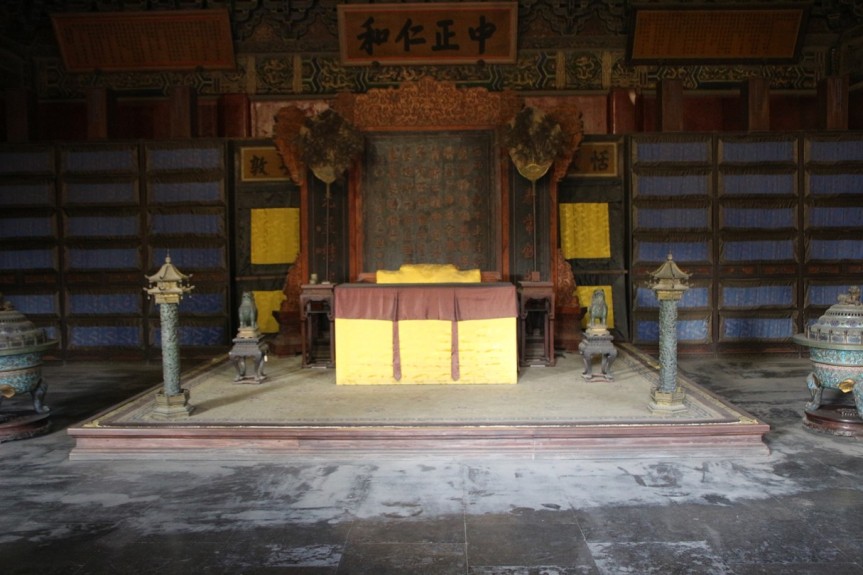 OK, so here’s a second picture of Holly and me. Ping suggested this picture in front of this tile mural with love birds. 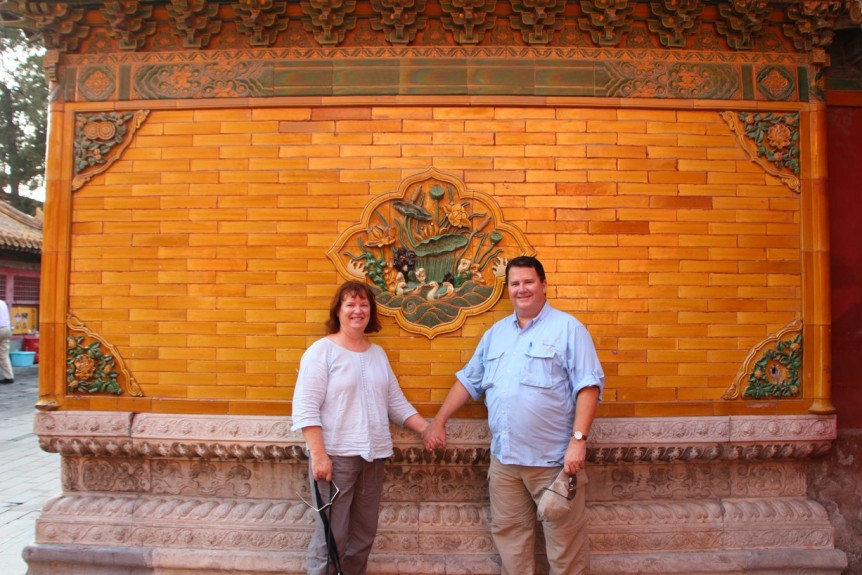 The Emperor’s Garden has many, many stone sculptures and Cyprus trees with twisted bark and groomed to grow into shapes resembling Chinese characters. To my western eyes, I don’t find the stones very attractive. I suppose that’s why I’ve never been a Chinese Emperor.

These kids were playing with ribbons on the end of a stick. 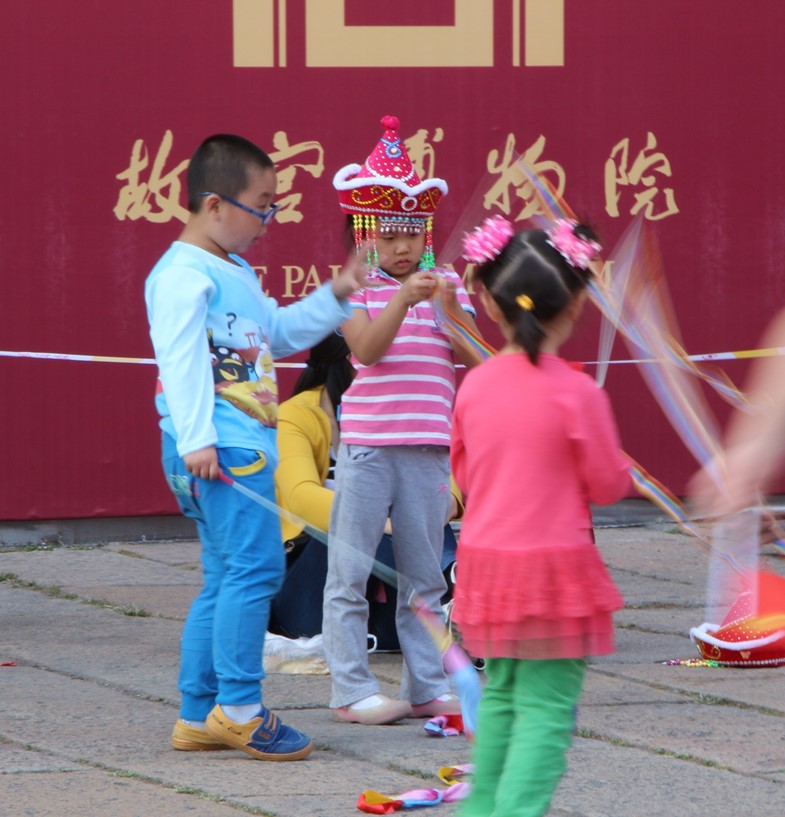 There are concessions with traditional dress available if you want to have your picture taken as the Emperor or one of his courtesans.