After exiting Glacier Bay, the ship set a westerly course though the North Inian Passage towards Cape Spencer. After rounding Cape Spencer thie ship had left the Inside Passage and entered the open ocean, setting a North Westerly course across the Gulf of Alaska towards Prince William Sound. The cruise from Glacier Bay to College Fjord is 529 nautical miles at an average speed of 18 knots for a 29+ hour trip. Since we were leaving the Inside Passage in the afternoon, we would arrive in Glacier Bay in the afternoon of the next day.

After we left Glacier Bay we took in a movie in the Princess Theatre (“Oblivion” with Tom Cruise). Towards the end of the movie, an announcement from the captain came on announcing that a passenger had taken ill and would be airlifted from the ships by the Coast Guard. To prepare for this, the ship came to a halt for about an hour waiting for the helicopter to come. All passengers and personnel were evacuated from the top three decks of the ship – including the buffet restaurant and kitchens, spa and gym, and all the deck furniture around the pools, ping pong tables, passenger rooms, etc… The helicopter doesn’t land on the ship, it hovers over the ship and they let down a basket. Our only involvement on level 9 was the cabin steward came rushing around and pulled in the deck furniture – we presumed to prevent the helicopter from blowing it into the ocean. We never did hear the helicopter – it came and went without our notice. I’m so sorry this fellow passenger became so sick as to have to be flown away – but I take comfort in how professionally the whole matter was handled.

These are photos I took in the Gulf of Alaska in the morning of Friday, September 20th on the way to College Fjord – as you can see, the sky cleared up to a cloudless bright and sunny day. It was cold, but glorious: 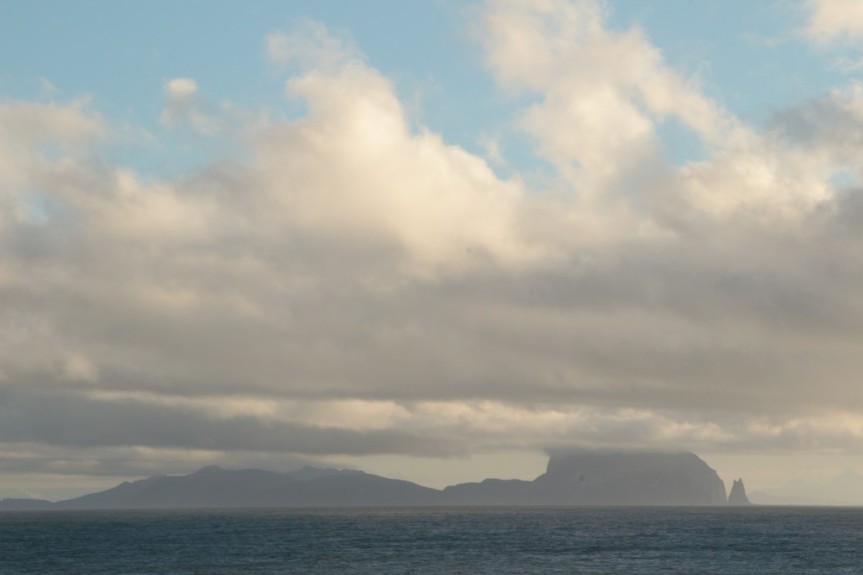 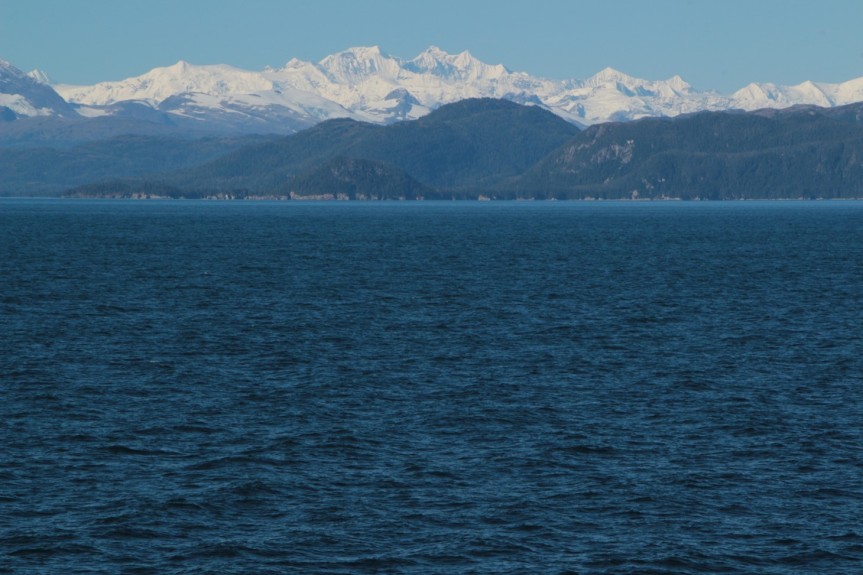 These pictures are taken in College Fjord, Alaska: 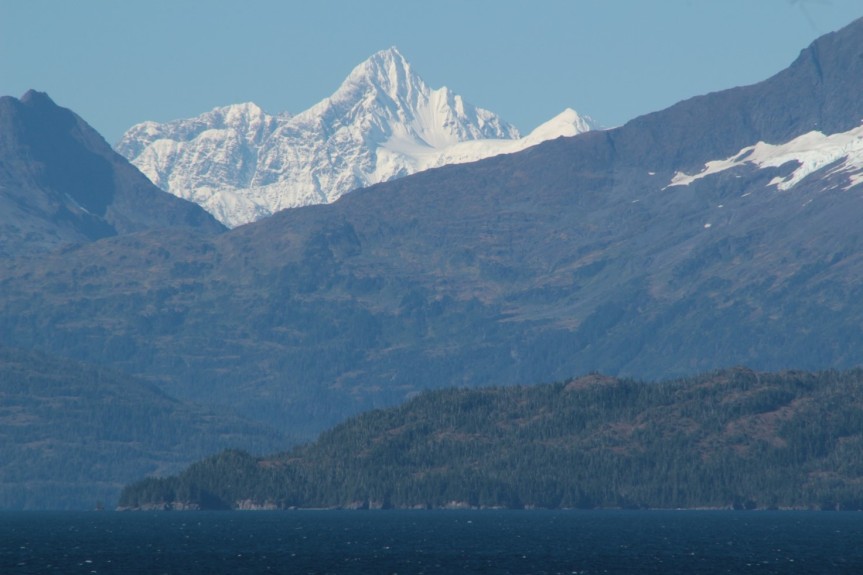 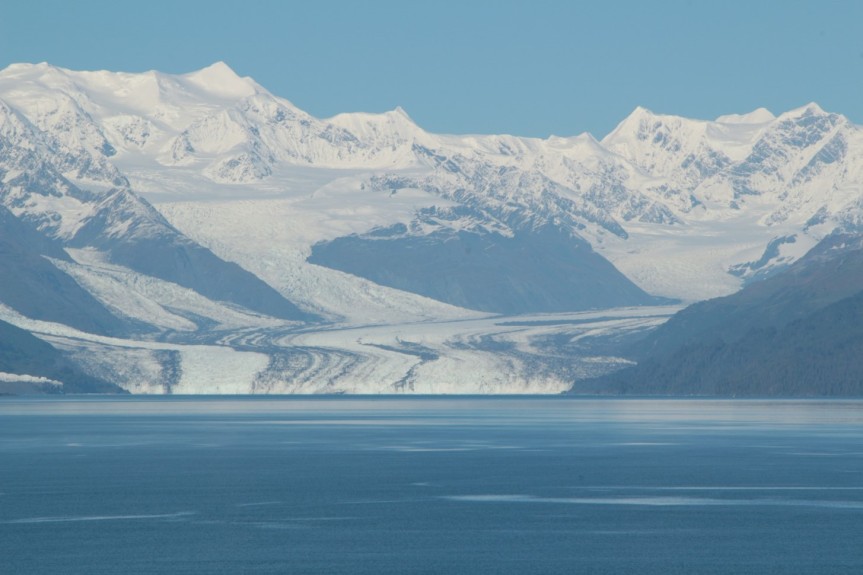 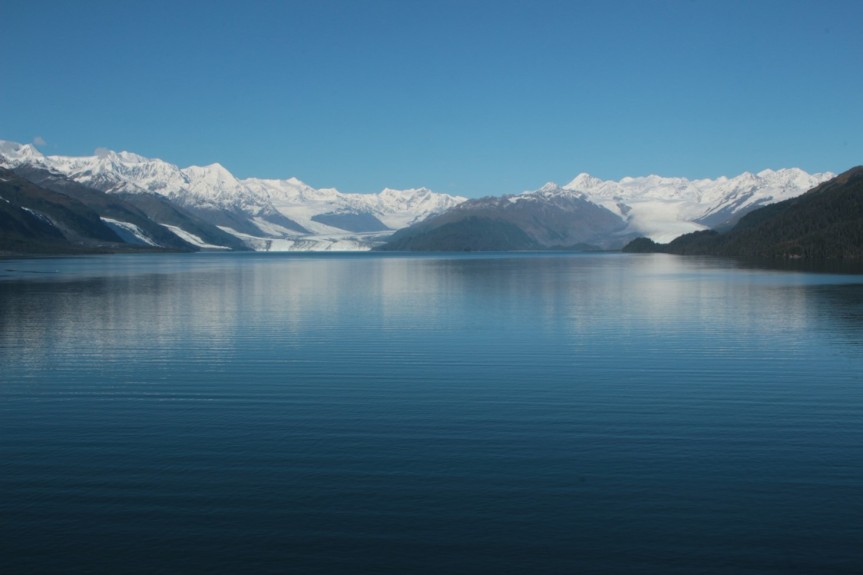 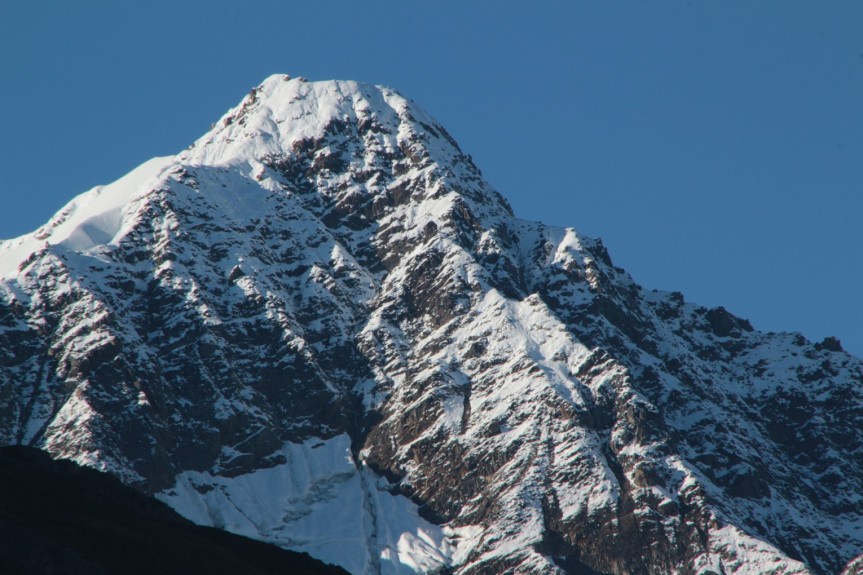 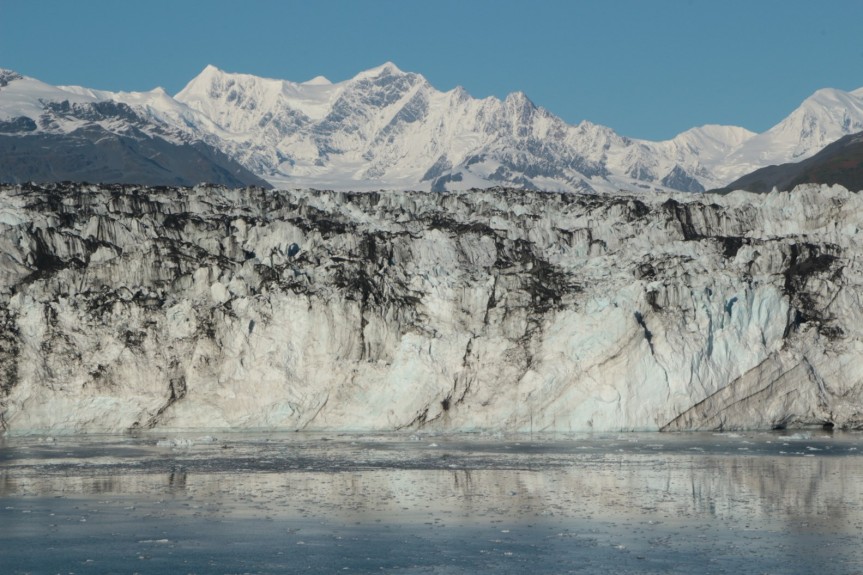 The smallest pieces of glacial ice in the water are called “growlers”. The bigger pieces are called “berglets”. 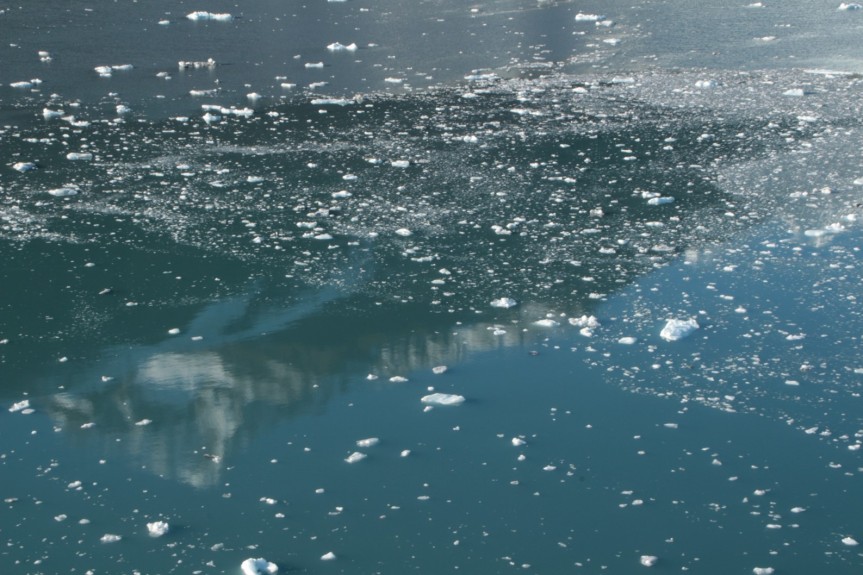 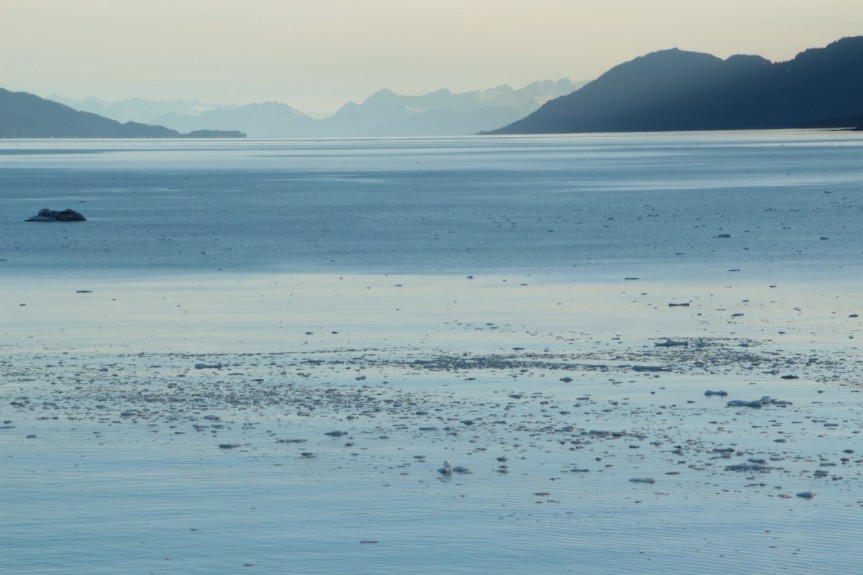 At sunset we left College Fjord, Alaska to head to our final Alaska port – Whittier, Alaska. It’s not far from College Fjord to Whittier, only 45 nautical miles, we arrived in Whittier at midnight. I was asleep.

Whittier, Alaska is not much of a town. It was originally a military base established to protect Alaska from the Japanese during World War II. There is no longer a military base here, but they did leave behind a very ugly building that looks like what I imagine Soviet era housing projects to look like. If I were a resident of Whittier, I would petition to have the Federal government remove this eyesore. Whittier was also devastated by a tsunami in 1964 after one of the largest earthquakes ever recorded. See: http://en.wikipedia.org/wiki/1964_Alaska_earthquake and http://www.usc.edu/dept/tsunamis/alaska/1964/webpages/1964whittier.html . So I don’t want to come off as negative towards Whittier, I just want to be as accurate as I can be.

Only a couple of hundred people live in Whittier these days. There is no real town here, just a few buildings along the waterfront and a high rise building we were told houses 85% of Whittier’s population.

Whittier, Alaska lies east of Anchorage and north of Seward. Passengers are bused to or from Anchorage along the road that follows the Turnagain Arm of the Cook Inlet. I presume that the cruise lines use Whittier as a port to save the time and expense of traveling around the Kenai Peninsula to dock in Anchorage itself. I’m not sure why the cruise lines don’t use Seward to the south as a port, except perhaps because it’s a longer drive from Anchorage. Seward, Alaska by contrast is a real town, with interesting things to see and do. Our day in Whittier consisted of walking to a store/museum and then walking back for a very nice lunch of halibut and chips at the restaurant at the Inn at Whittier, easily the nice establishment in Whittier (it’s the building in front of the cruise ship in the picture below).

At the end of the day, our ship left Whittier to begin our cruise to Asia. More on that in my next blog posting. 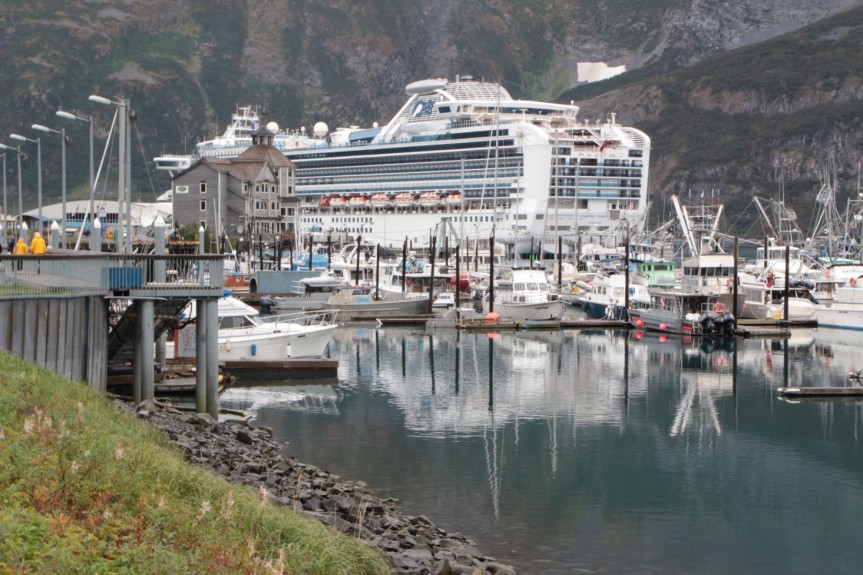 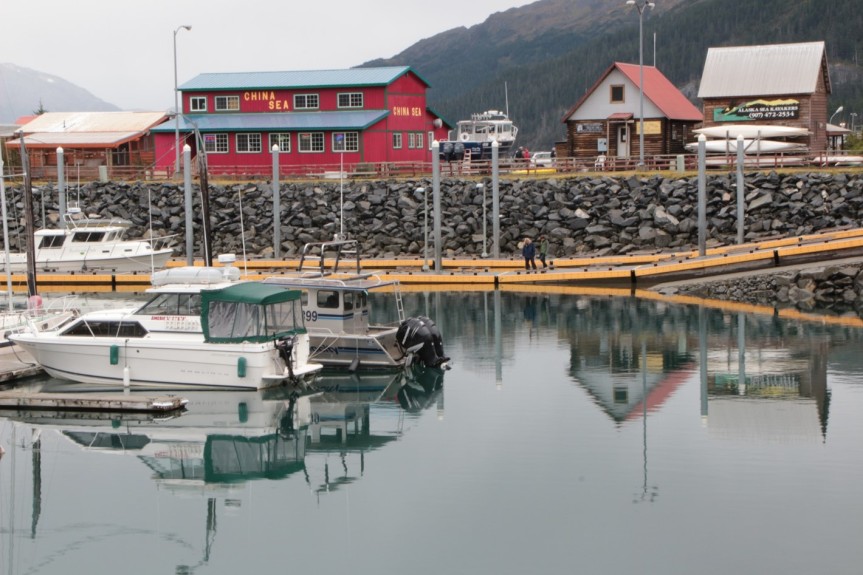 P.S. – Visiting Whittier, Alaska reminded me of Whittier, California just over the hill from where I grew up in Hacienda Heights. Holly and I were married at the Painter Avenue Church of Christ in Whittier; the church Holly and her family attended while she was growing up.