I have to admit to virtually no knowledge of Hungary before we arrived in Budapest. I associated Hungary with three things:

We arrived in Budapest on the train from Kiev, Ukraine in the late morning. It was cold and lightly snowing. Holly gets excited every time it starts to snow, but it hasn’t yet snowed enough for any to accumulate. We were impressed by the Budapest train station, a nice old building, centrally located with a subway station adjoining, so it was easy to get to our apartment once we acquired a map and figured out where we needed to go. 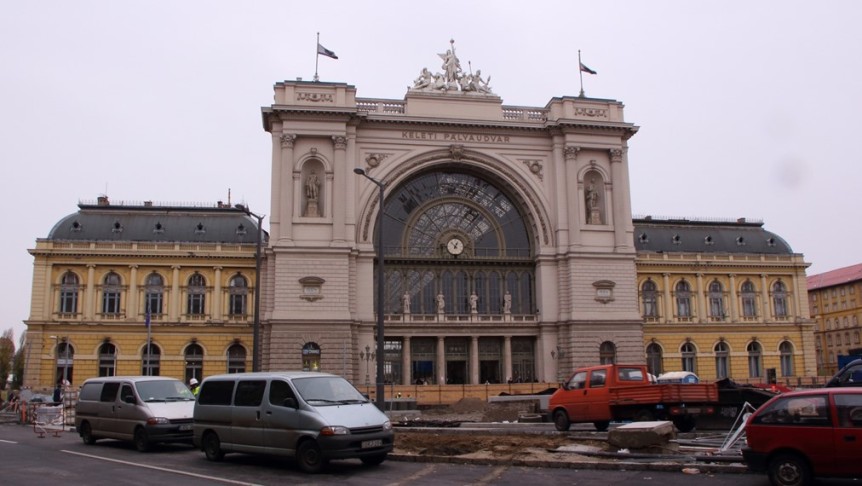 Holly arranged for us to rent an apartment in this building for three nights through the www.homeaway.com . Total cost for three nights: 185 euros. We really liked this apartment and would recommend it to anyone visiting Budapest. The name of the apartment is: “Golden Star ‘Royal’ Apartment”. The address is 5th District, Iranyi str. 21. The owner Tomas Sipas met us at the apartment and give us a quick orientation and the keys. His website: www.goldenstarsapartments.com

Here’s a view of a part of the interior of the apartment. It was very comfortable and very well located for tourists to subways and sights.

There’s even a little balcony, here’s a view of the street from our apartment: 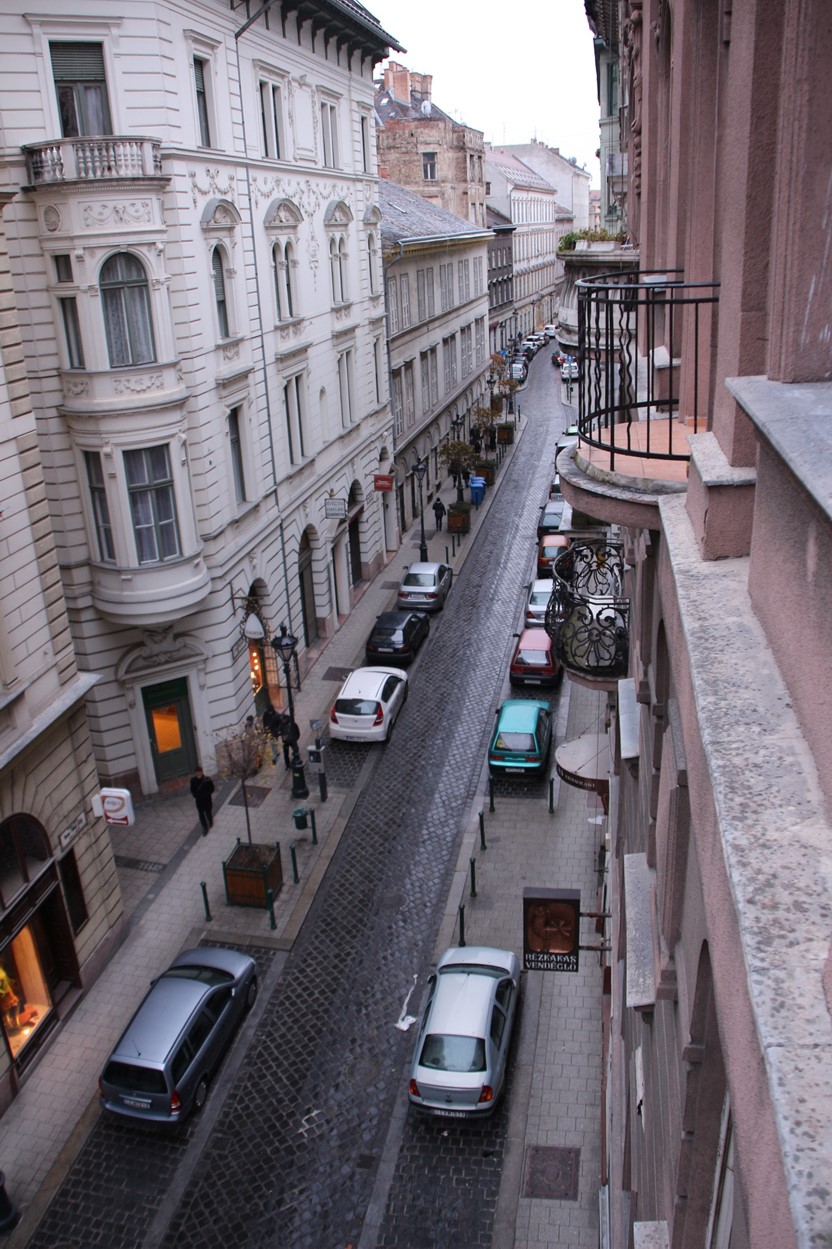 Budapest is really two cities, Buda and Pest that were joined together officially in 1872. The Buda side is on the hilly west side of the Danube River. Pest in on the flat plain east of the Danube. We decided to start our tour of Budapest by going to Castle Hill on the Buda side of the Danube. To get around, we bought subway tickets that we ended up not using much, in fact we gave away our remaining subway tickets as we left the city at the end of our stay. We mostly got around by walking and using the Red Hop on-hop off tourist bus.

The Hop on-hop off bus dropped us in the middle or the Castle Hill area. To the north, was Matthias Church and to the south the palace complex. We tried, but mostly failed, to follow the Walking Tour of the Castle Hill neighborhood outlined in the Lonely Planet. We walked north through the narrow streets and then looped back to “Fisherman’s Bastion” the structure partially pictured below. It looks like old city walls, but it’s not. What it is, is a really great place to take pictures of the Pest side of Budapest and the Danube.

Here’s a photo I took from Fisherman’s Bastion looking south along the Danube:

Here’s a photo of me and Holly standing on Fisherman’s Bastion with the Hungarian Parliament building over Holly’s shoulder:

Next to the bastion is this equestrian statue to St. Stephen:

Next we went into Matthias Church:

This is one of my favorite architectural details in Matthias Church, a church full of decoration and detail:

We were cold and tired, so we decided to treat ourselves to a really nice lunch on Castle Hill before we continued our sightseeing. We had a very nice lunch at Café Pierrot. (www.pierrot.hu ) It was a little expensive but worth it.

Refreshed after lunch we continued our tour of the Castle District by walking over to the Royal Palace complex. According to Lonely Planet the palace complex has been razed and rebuilt at least six times over the centuries, most recently rebuilt by the Hapsburgs who spent most of their time in Vienna and little time here. (More on the Hapsburgs in our upcoming blog post on Vienna.) Now the palace complex houses museums including: The Hungarian National Gallery, the Budapest History Museum and The National Szechenyi Library. We didn’t have the time to take in any of these museums on this visit. That will have to be a future visit.

Here I am in front of the Palace Buildings:

We should have heeded our Lonely Planet guide, but instead we then visited Buda Castle Labyrinth. It was a waste of time and money. Nothing but a bunch of tunnels with underground rooms with cheesy manikins in period costume. Holly and I breezed through it as quickly as we could.

We then rejoined the hop on-hop off bus tour and which stopped at the Citadel, fortifications and a statue built on a nearby hill for the protection of the city, but never used. The bus stopped for 5 minutes, long enough for me to jump off and take some pictures including this one:

And this picture of the Danube River was also taken from the Citadel. The bridge in the foreground is the famous “Chain Bridge”: 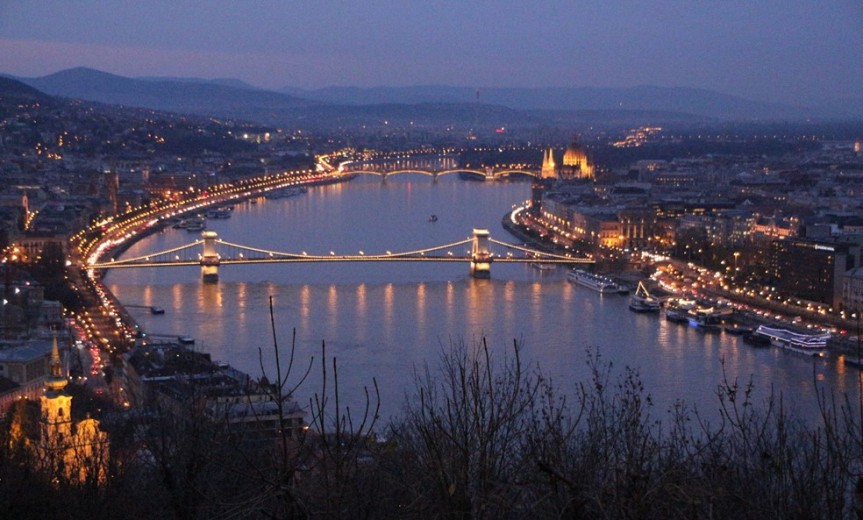 Here’s another view of the Chain Bridge taken from a boat on the river with Matthias Church and The Fisherman’s Bastion lit up in the background. The Chain Bridge is to Budapest what the Brooklyn Bridge is to New York City. Opened in 1849, it was Budapest’s first permanent bridge over the Danube uniting Buda and Pest. Severely damaged during World War II, the bridge was rebuilt in 1949.

The Basilica of Saint Stephen, dedicated to the first King of Hungary. This is the most important Catholic Church in Hungary. Notice the railing around the dome, that’s a viewing platform around the dome from which the entire city can be viewed on a clear day. As you can see, we had an exceptionally clear day, so we could see the entire city. 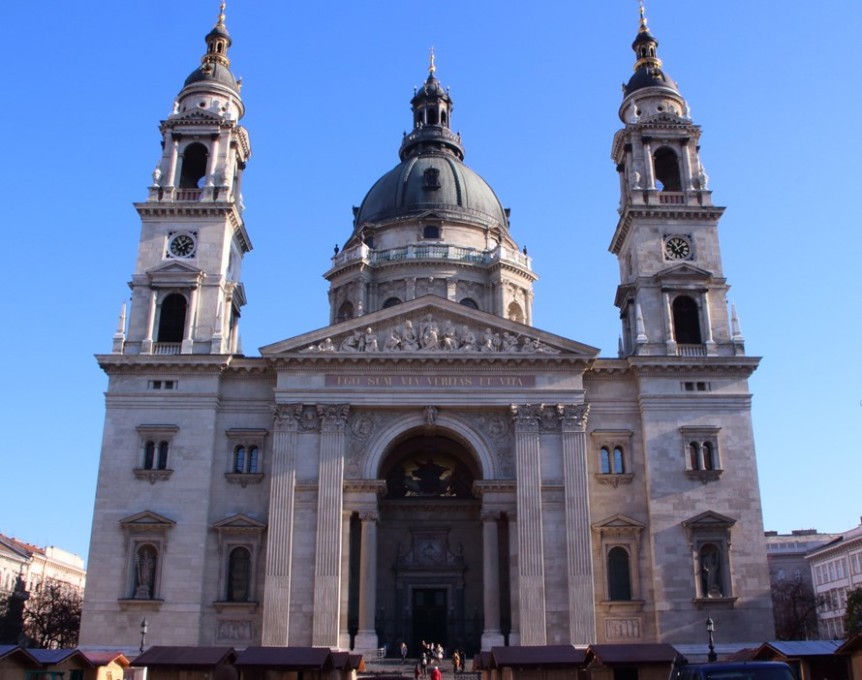 We climbed this spiral staircase below to access the viewing area around the dome to get a panoramic view of the city. It was a lot of steps and then a short elevator ride to the top.

Holly is not a fan of high places, but I took the opportunity to snap pictures, like this one. I like the colorful roof tiles we saw on some of the buildings.

Not only did they name the Cathedral after St. Stephen, they have his mummified “incorruptible” right hand on display in a reliquary in the Holy Right Chapel (picture below). St. Stephen died in 1038; that hand is almost 1,000 years old.

As we walked from the Basilica of Saint Stephen to the Parliament Building we walked through a very nice park-like square – Freedom Square. The monument in the middle of the square is one of the few remaining Soviet-era monuments left in Budapest. This monument is dedicated to the Red Army soldiers who died in 1944-45 during the liberation of Budapest from the Nazis. 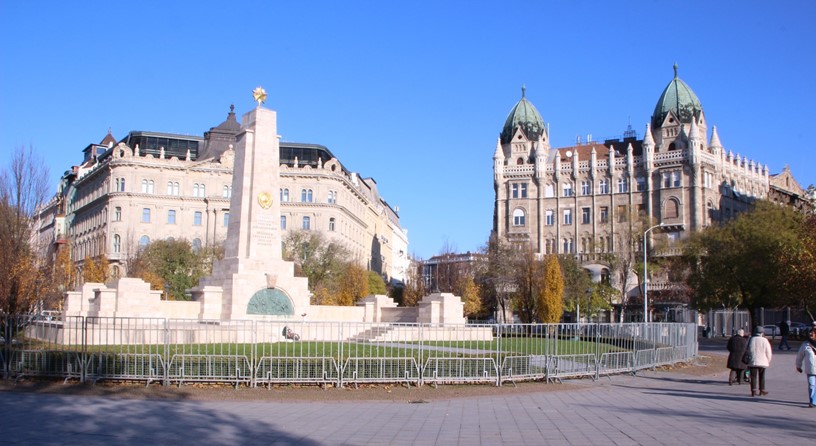 Off to the side of the Soviet Monument is this statue of Ronald Reagan also in Freedom Square. That’s the Hungarian Parliament building over President Reagan’s right shoulder. This statue, unveiled in 2011, honors Mr. Reagan’s role in helping to end communism in former Soviet countries – including Hungary.

Originally the Hungarian Parliament building was built with two halves, like our Capital Building, or the British Parliament building, both of which have two legislative chambers. Hungary today has a unicameral government, so the chamber below is no longer used, except as a meeting room or for presentations or other gatherings. 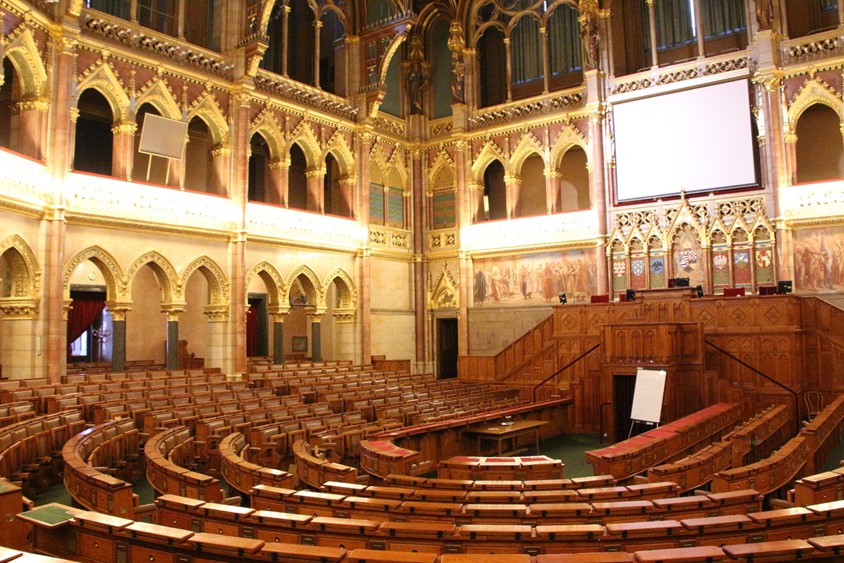 The Lonely Planet reports: “Budapest lies on the geographical fault separating the Buda Hills from the pancake-flat Great Plain, and more than 30,000 cubic meters of warm to scalding mineral water gush forth daily from more than 100 thermal springs. As a result, the city is a major spa center and ‘taking the waters’ at one of the city’s many spas or combination spa/swimming pool complexes is a real Budapest experience.”

We decided it would be relaxing to soak in some hot water, maybe get a massage, so we chose to go to the Gellert Baths. Below is a photo of the Gellert Bath building. As you can see, it is a very large and impressive building.

I couldn’t take pictures inside the Gellert Baths, so I chose these shots from their website: www.gellertbath.hu This is a picture of their indoor pool. 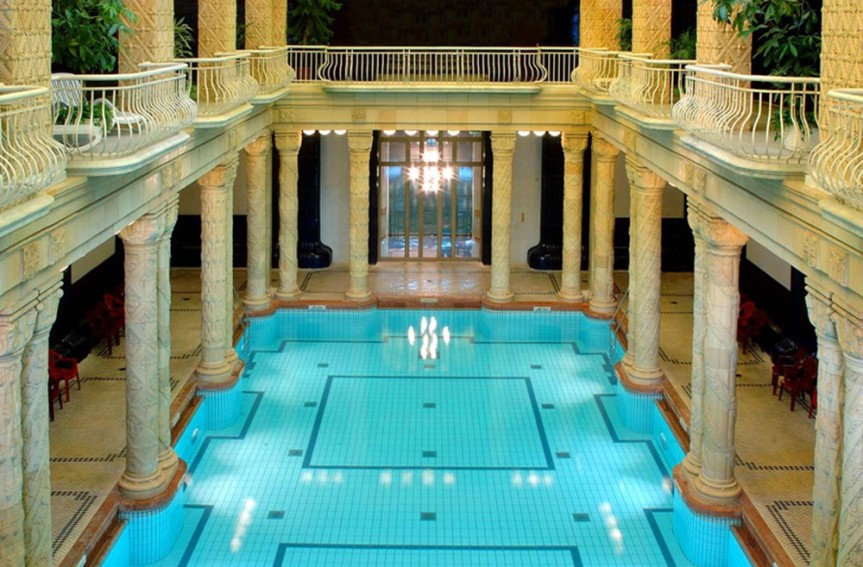 Bathing here has been likened to bathing in a cathedral. Here’s a little sculpture over one of the thermal baths (aka Hot Tubs). 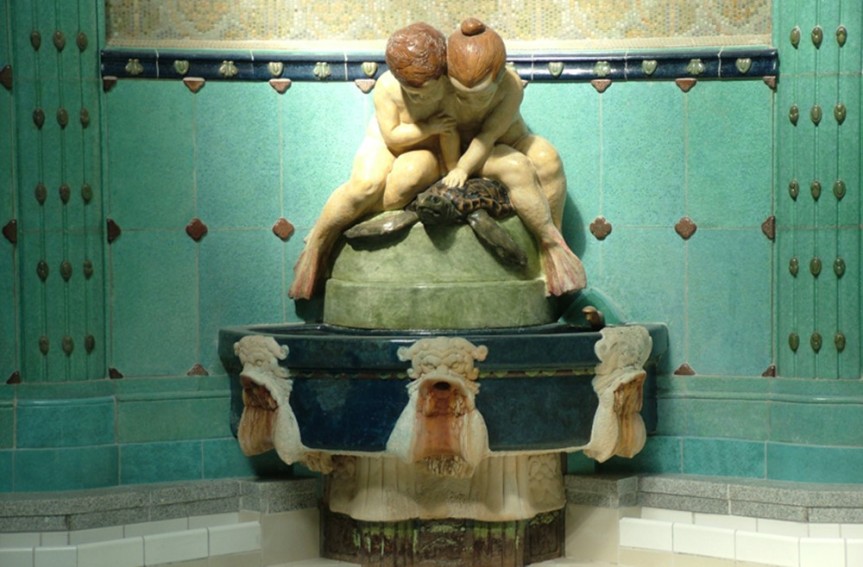 While I enjoyed the building and the water once we got into the pools, baths, steam rooms and saunas; my blood pressure was through the roof from the confusing process of buying access, getting to a locker, renting a towel, arranging spa services and buying a disposable swimming cap, that I almost gave up and asked for my money back. I’m sure my difficulty was due to:

But I have to say I have never seen a more poorly organized, Rube Goldberg designed, system for delivering spa services. It would take too long and it would be too tedious for me to detail the process by which we purchased tickets, rented a towel, bought a swimming cap, found our locker (these are all separate processes). Holly and I really would have loved to have had a massage, but that simply proved to be an incredible hassle – even Holly got agitated, so you can imagine, we finally told the 14th person we were directed to, to forget it (at least he seemed like the 14th person in a chain of people we were passed onto). Once you are inside, as beautiful as it is, it’s like a labyrinth inside. They handed us a paper map. My humble suggestion is to laminate some maps so that first timers can carry maps with them inside the baths, instead of dropping bread crumbs to find your way around.

The Gellert Bath building is impressive and I suppose if you have all the time in the world to go through the rigmarole to figure out how to use it, it could be nice. By the time I had used the pool, thermal baths, steam rooms, etc. for about an hour, my blood pressure had finally dropped back to about where it was when I first arrived.

After our bath experience, we took a boat ride on the Danube. The hop-on/hop-off bus ticket includes a boat ride and at night the lights of the city reflecting on the river are beautiful.

Here’s a photo of Matthias Church and Fisherman’s Bastion taken during our river cruise. 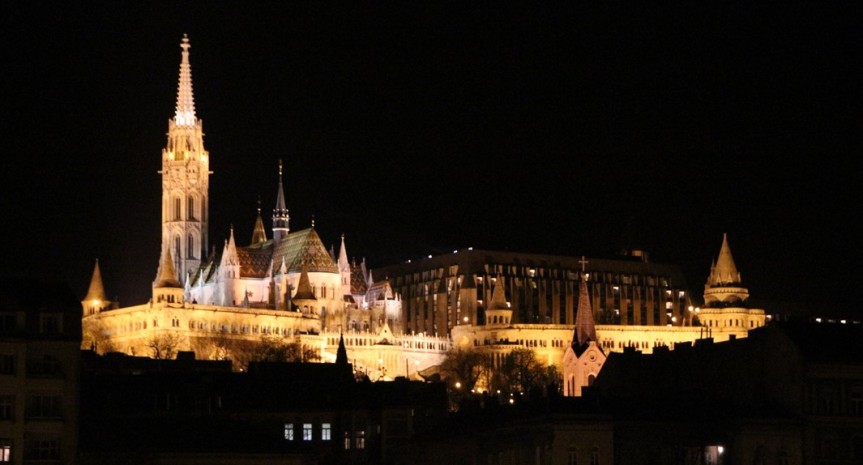 This is a photo of the Palace with the Chain Bridge in the left foreground:

We had a very enjoyable visit in Budapest. We could have used at least another few days here, but we had to keep moving. Next up: Vienna.

Categories: Hungary, Trip Around the World